This AOMEI Backupper review is for you If you need to backup your disks ,partitions, OS, files or anything else (in less than 3 clicks).

Is it the best Windows backup software?

In my personal opinion, it may very well be.

But, that doesn’t have to be the universal truth. You certainly shouldn’t believe it.

Hence, just go through this piece and see if it suits your needs and requirements?

What is AOMEI Backupper?

AOMEI Backupper claims being one of the best Windows backup and restore software.

The primary features it offers include:

How good these features actually are?

That’s what I’ve dedicated this AOMEI Backupper review to.

I’ve used the tool for a few months now, this verdict too is based on my own experience.

So, I fell in love with its interface as soon as I launched it.

It’s so extremely easy to use, I instantly knew how to create a file backup (that’s what I downloaded it for).

In fact, just for fun; I tried creating a system backup and achieved that in around 3 clicks as well.

Although, the other advanced features (which I didn’t know existed the first couple days) further impressed me.

It offers easy encryption, scheduling, compression and splitting. Hence, not just the actual “backup”, but the storage and automation too is taken care of.

The fact that it offers a 100% free version sealed the deal for me. In fact, I initially downloaded the free version and only later upgraded to the paid “Professional” plan.

All in all, I’d say if you need an easy, yet feature-rich backup solution, AOMEI Backupper won’t be a disappointment.

Based on my personal experience, here’s everything I liked and didn’t like with AOMEI Backupper-

(Why list one just for the sake of it, huh?)

However, the paid plans sure offer more features. Here are all the plans:

There’s even a 90-day refund policy on  all the paid plans!

Don’t take my word for anything on this AOMEI Backupper review. Go try its free version and see for yourself?

As soon as I launch the tool, here’s what I see: 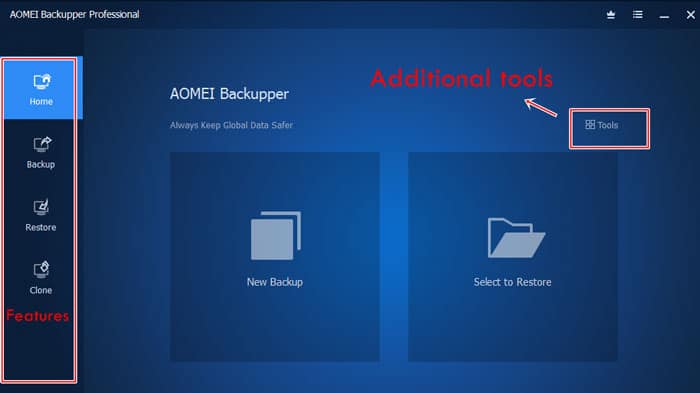 Doesn’t throw a ton of confusing options or settings at me.

The centre-screen holds the two most important options:

The left-sidebar is the navigational panel using which I can switch between the features.

There also is the “Tools” option which brings up a list of all the available tools.

In a nutshell, I don’t suppose you need a PhD in anything to understand AOMEI Backupper.

However, most of these features are linked to its primary “Backup and restore” feature.

To get you a much better and detailed idea of the tool, I’ll not only explain its major features, but also show (with screenshots) how to use AOMEI Backupper.

Let’s start at the basics then?

How to use AOMEI Backupper to create a system backup?

The System Backup creates a backup of the system files.

This primarily includes the system Partition and the boot Partition.

Note that everything else, except the OS in these partitions too is backed up.

I truly loved the fact that it’s a self-guided process.

Imagine this, I’ve never before created a system backup.

And yet, using the tool, I created one in exactly 3 clicks.

Here are the steps: 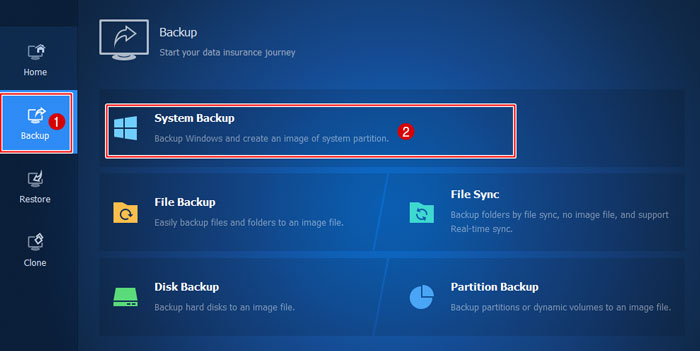 AOMEI Backupper auto-detects the partitions consisting of the system and boot files and displays them. 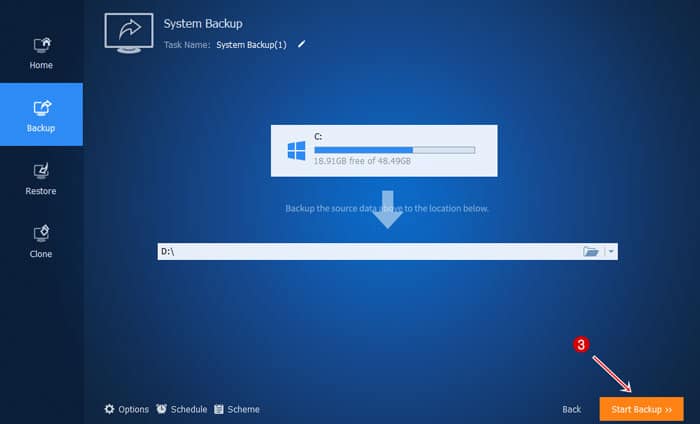 Done! You don’t “have to” do anything else.

Although obviously, there are some features you can use optionally just for better organization.

For one, you can assign this task a “name”.

Or, you can change the destination drive/folder where you wish your backup image to be stored.

How to backup a specific file/folder using AOMEI Backupper?

AOMEI does allow backing up specific files and folders.

Step 2-> Choose what you wish to backup (a file/ or a folder) > set the destination drive (optional) > Start backup. 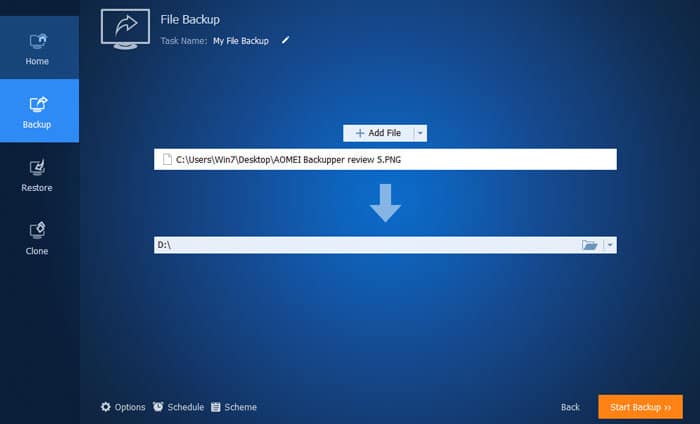 At the least, I’ll say the simplicity and ease-of-use does deserve 5-stars.

Why no “how to” steps for these?

Because, the steps are “identical” to the steps mentioned above.

Simply click on “Backup” and choose the feature you wish to use.

In most cases, you simply have to click on “Start backup” on the next screen and the process is initiated.

Let’s look at the other features AOMEI Backupper offers?

It too is a kind of backup-feature, but not exactly.

The file-sync basically syncs, or copies the source folder to the destination folder.

We all have extremely important files and content we’d like to have a second copy of, don’t we?

Simply select a source folder, and a destination folder and done!

However, its “real-time” sync is what makes it really impressive (and automated).

If this is selected, the source folder is monitored at all times. If and when a change is detected, the new content is automatically synced to the destination folder as well.

If you have the desktop app of a cloud storage/backup provider, it can detect changes in the source, and sync it to your cloud provider as well.

Sure, I’d have loved if it supported 2-way sync. It doesn’t, and I’m not complaining considering how the tool is largely free.

No matter which AOMEI Backupper feature you’re using, you’ll notice a “schedule” option at the bottom of the screen.

This can be used to automate whatever you’re doing.

Specially when dealing with backups, automation and frequency is major requirement, isn’t it?

Here are the features: 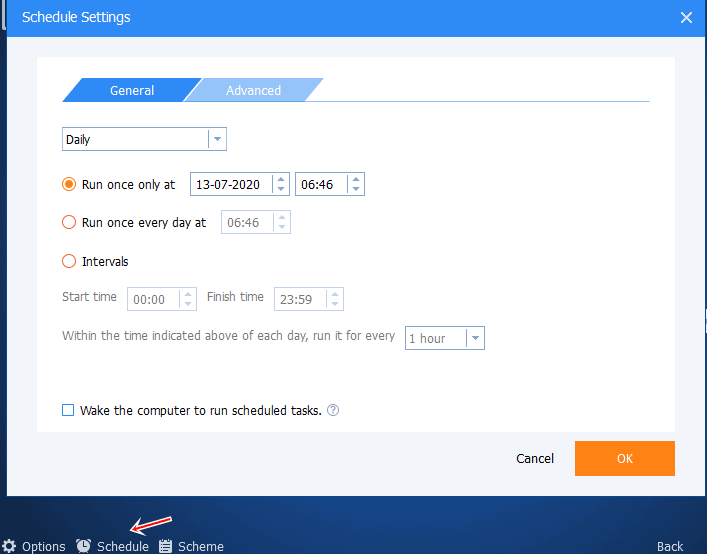 Even monthly and weekly schedules can be set. You set a day/date/time for the schedule to be executed.

This is the first data backup solution I’m using which offers such advanced scheduling options.

These are basically “actions” which trigger a backup/sync action to be initiated.

The following event-triggers are available: 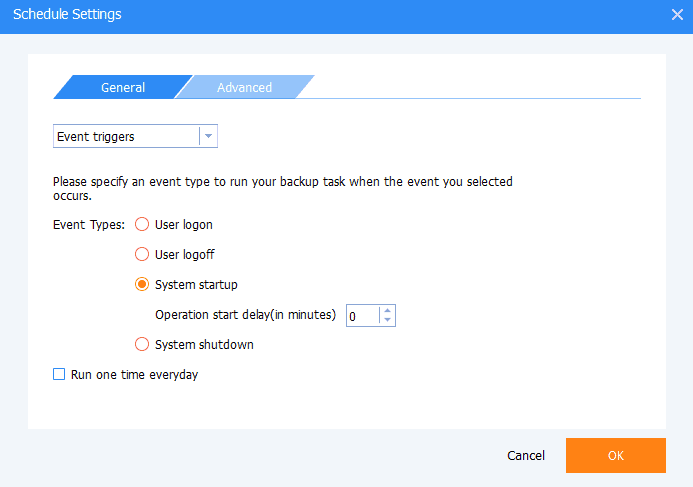 Bottomline? Not only are these features advanced, but also extremely easy to use and newbie-friendly.

Another one of the most important aspects on this AOMEI Backupper review.

On the schedule screen, if you go to the “Advanced” tab, you’ll find these three options.

Not sure what these are? I’ll explain (in words you can understand).

If you select full backup, a new, complete backup, of everything on the selected drive/location is taken, every single time.

The Incremental backup only backs up the “new” data on the source file. This reduces the overall size of the final, consecutive backups.

However, recovering this backup would require the first, full backup + all the incremental backups taken thereafter.

Differential backup is similar to Incremental backup. It too backs up only the “new” data.

However, these can be recovered even if just the first full backup, and the last differential backup is available.

In other words, the other backup files, in-between the first and the last backup aren’t required.

Now, I’ve used half a dozen backup tools so far.

AOMEI Backupper is the only backup solution to offer these features.

One of its other prominent features is its cloning ability.

I’m sure the names make their functions clear, don’t they?

What I personally loved is the fact that it’s cross-compatible.

As in, I can clone disks to and from one another even when their sector sizes and entire partition styles are different.

The four additional features that AOMEI Backupper offers are:

Sure, this is a AOMEI Backupper review, but the tool extends its functionalities beyond simple backup.

Need to create an emergency bootable disk for your OS? You got it.;

It lets me create both a Linux bootable disk, as well as a Windows disk.

Just select the OS (Linux/ Windows), select either a CD/Drive or a USB storage which you wish to use, and done.

(You can obviously also just get an .iso image for burning later).

Before trying it for myself, I was surfing through AOMEI Backupper reviews and had this question for myself.

Well, In my personal experience, I’ve had 0 data-loss so far.

Even though I’ve restored a backup just once, it went fine without any hiccups whatsoever.

As far as “data-privacy” goes, the tool is “offline”.

Meaning, nothing is uploaded to any server and hence your data remains “yours”. The company never gets any access.

(Although, occasional glitches and corruptions may still happen, it just hasn’t happened to me).

Let’s wrap this AOMEI Backupper review up? Do let me know what you think of the tool eh?