Does it offer enough speed?

Is it priced rationally?

Does it keep logs? 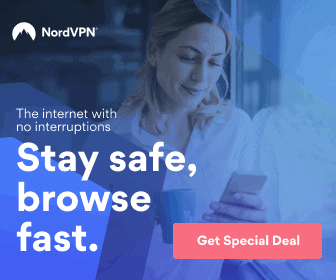 These, and most other questions related to the tool are what I’ll be answering throughout this Atlas VPN review.

This truly will be the most honest, transparent and data-backed review for Atlas VPN.

I’ve read enough buy this product, it’s the best reviews. I promise, this wouldn’t be one of those.

What is Atlas VPN?

The name makes it pretty evident, doesn’t it?

More specifically, it’s a VPN made exclusively for mobile devices.

It can be downloaded for both Android as well as iOS devices.

Unfortunately, no PC version exists yet.

Alike all other VPN services, it helps you mask your IP address and remain anonymous on the internet.

Other common benefits include unblocking of locked websites, and a secure, encrypted  connection.

Need the strongest and weakest points right away? Here goes:

If you need a truly free VPN service, which is sufficiently secure, offers speeds as good as paid VPNs, and can unblock streaming services such as Netflix, Atlas VPN totally hits the mark.

If you need to secure your PC, or are looking for hardcore security features, in those cases Atlas VPN may not be the best choice. (I did say I’ll be honest, didn’t I?)

Maybe I’m prejudiced cause I’ve used a ton of other VPNs by now.

Hence, I urge you to go through this Atlas VPN review before making your decision.

It’s free to the extent that it doesn’t even need your e-mail IDs! (Read the next section for details).

The free plan obviously has its restrictions.

E.g. you can only connect to New York, Los Angeles or Netherlands. The speed too is slightly reduced as compared to the paid plan.

You can use Atlas VPN without ever paying a penny!

However, there’s a single paid plan which can be billed both monthly as well as yearly:

Scroll to the very bottom of this Atlas VPN review for an Atlas VPN discount coupon 2022 or click here.

Even after a forever free plan, a month-long refund policy is just unheard of, and exceedingly impressive.

This (in my opinion) is truly the most exclusive and unique Atlas VPN feature.

You need anonymity and privacy, right? (I do too).

Well, Atlas VPN lets you download the VPN, and connect to a different IP address straight away!

No signups/ registrations or payments required!

If there are no accounts, there’s nothing to be linked to.

Can you use it if this is your first-ever VPN?

Once downloaded, this is what you’ll see:

Just tap once on that big button at the centre.

You’ll be instantly and automatically connected to the best available server.

If you slide up from this screen, you’ll get the server-list. 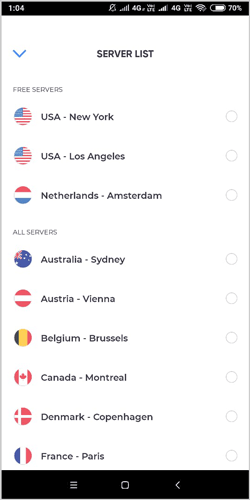 Tapping on any of these countries instantly connects you to that specific country.

The bottom-be used to reach other features/sections that the VPN offers.

So far, it does seem pretty easy to use and understand, doesn’t it?

How many countries and servers does Atlas VPN offer?

The VPN offers 17 countries to choose from.

Some countries, such as USA offer more than one cities to connect to which is pretty desirable.

However, if I’m being honest, the list of countries is “acceptable” at best.

I’ve seen some of the best VPN providers offer over 60 countries.

I’ve been using Atlas for over a week now, and still haven’t run out of countries to connect to.

Now, do tell, which is the most commonly heard or experienced VPN-problem?

Simply because every VPN out there kills speed a bit.

The one with the least speed-loss wins.

Is Atlas VPN fast then?

Yes, it is. But, why should you trust me?

Well, I conducted speed tests with and without Atlas VPN.

Here are the results: 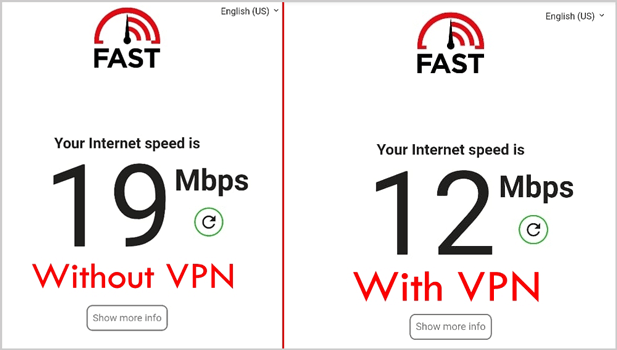 As is evident and expected, speed-loss did occur.

However, it’s pretty negligible, isn’t it?

I wouldn’t even notice the speed-drop if I wasn’t monitoring it with fast.com

Comparatively, have I seen better VPNs?

But hey, Atlas is largely free, and for a free VPN this is a pretty good impressive loss-margin.

Does Atlas VPN offer a Kill-switch?

It most definitely does!

I love failsafe and backup plans, don’t you?

The Kill-switch is exactly that.

It makes sure that your Internet gets auto-disconnected if and when the VPN connection drops.

In other words, if you’re on the internet, and you connected Atlas VPN, with the kill-switch enabled, you’ll be able to use the internet only as long as the VPN connection remains intact.

Else, your internet gets disconnected automatically.

And well, it’s optional. Feel free to enable/disable it at will.

I’m sure some of you knew that.

However, it’s being mentioned because not all VPNs offer a kill-switch on their mobile versions.

Why should PC users have all the security, right?

Another feature worth praising in this Atlas VPN review.

In simple words, it prevents access to malicious websites or apps.

Now hey, I personally don’t recognize all malicious sites by default, do you?

This makes sure we’re secure not just “technically”, but also from other vulnerabilities a hacker/group may exploit.

Two primary questions with most VPNs.

How much data can you use in a month with Atlas VPN?

What’s the maximum number of times you can change your IP address?

Well yes, Atlas VPN doesn’t restrict you (or anyone) based on the bandwidth or server-switching.

No matter how much data you consume over the VPN, you never have to pay extra or upgrade your plan.

This isn’t an “exclusive” feature. Most other VPNs do offer it.

However, not “all” VPNs do.

How many simultaneous connections/devices does Atlas VPN offer?

A major decisive-factor I consider before choosing a VPN is the number of “simultaneous connections”.

This is the number of devices I can connect to the same VPN account.

I’m sure your family too has more than just one devices?

Well, no device restriction was found with Atlas VPN.

So, it does seem to support unlimited connections and devices.

And then again, you do remember Atlas VPN doesn’t need “accounts”, don’t you?

Hence, download Atlas VPN on as many devices as you want, for free, no limits whatsoever.

This in fact is one of the primary reasons why I personally use Atlas VPN.

But well, not all VPNs can unblock Netflix.

Netflix has one of the most advanced VPN-detection services.

So, I decided to test Atlas VPN with Netflix.

I launched Atlas VPN and connected to one of the U.S servers.

Here’s a screenshot of me streaming Netflix, while connected to Miami, U.S. 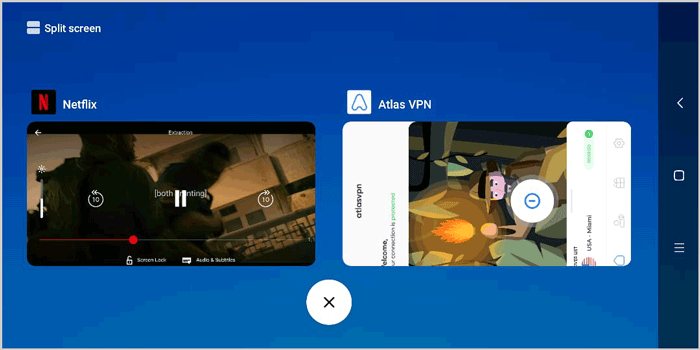 Meaning, you can’t just use Atlas VPN with Netflix, you can also access content which is not available in your country/region.

In my case, I searched for The Flash season 6 on Netflix.

It’s not available in my country.

But, I connected Atlas VPN to Netherlands (where it’s available), and it did unlock The Flash for me!

This also proves that Atlas VPN can be used for video streaming.

The quality of the videos too is in no way compromised, hence proving the speed!

But, not all the VPNs are very efficient at the job.

Some do leak information which shouldn’t be leaked.

So, I connected my VPN and went over to www.dnsleaktest.com 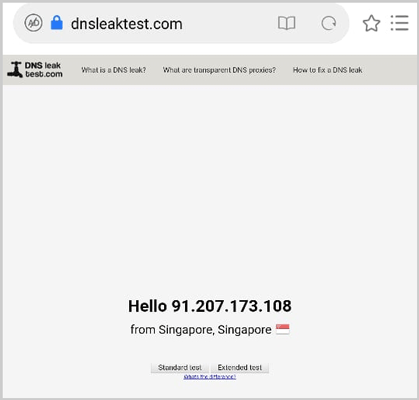 The above screenshot shows I’m from Singapore.

This proves that the VPN does actually work!

I couldn’t find a lot of information regarding the available encryption protocols.

The app too doesn’t offer any options to choose/change the protocol.

However, after due research, it seems Atlas VPN offers AES 256-bit IKEv2 encryptions.

Is it the best encryption protocol?

Not exactly. OpenVPN is.

But, IKEv2 sure is the next best thing, especially on mobile devices.

This is the most important section on this entire Atlas VPN review.

Don’t you wish to know if Atlas VPN keeps tabs on you?

And if it does, it’s practically useless, isn’t it?

Fortunately, that’s not the case.

In other words, your real IP address and web-activities aren’t logged.

It also claims that data isn’t shared with third-parties.

However, it is shared with third-parties which are in partnership with Atlas VPN for technical and legal reasons.

They do allow manual data-deletion requests.

You can send them an e-mail and ask for certain data to be deleted, and/or changed.

Now, for my personal opinion?

It’s not the most anonymous log-policy.

But, they do seem to value transparency and honesty.

They’re telling us what they store, and what they don’t.

The fact that they’ll cooperate with law enforcement agencies too is transparently mentioned.

But, it’s also mentioned that the amount or type of data they do retain can’t be used to identify you (or any user) personally!

As of now, their no-logs policy isn’t independently verified.

I’d sure love that if and when it happens.

What is Atlas VPN “Assistant” feature?

Hundreds of sites get hacked everyday.

Wish to know if your e-mail is on any of those hacked lists/databases?

Atlas VPN offers an in-built feature to do so.

I sure am happy and impressed with Atlas VPN, at least to some extent.

As a result, I partnered up with them.

You get 10-day free, premium access to the VPN if you use this coupon:

Probably the most disappointing aspect on this Atlas VPN review.

Support is only offered via e-mail.

While I’m not sure of their response-time, e-mails almost always need a couple hours, don’t they?

Now, I have reached at the end of Atlas VPN Review.

if you are using Atlas VPN, share your review in comments.

« 17 Sites like Canva And Better Alternatives in 2022
FPTraffic Review 2022: Is It Best Social Media Scheduling Tool? »