This BlufVPN review will discuss the best features and problems with the VPN. If you’re trying to hide your identity online, access a restricted website or stream blocked content, this piece is for you.

Now, I’m not asking you to go pour your money into the VPN, I never do that. All I ask is, go through this piece and then decide if it’s worth your time and money.

If you do decide to try it though, it’s “technically” 100% free! You get a massive 30-day test period which is pretty impressive, isn’t it?

Here’s a brief insight into the VPN before you go all in:

I believe a VPN isn’t worth your time if it doesn’t have a very strict “no log” policy. This is why I’m bringing this up before anything else on this BlufVPN review.

The VPN does have a “no log” policy. It doesn’t store any logs which can be traced back to identify you.

Obviously, after spending over half a decade in the industry, I don’t just trust snippets anymore.

So, I went into the fine print just to be sure.

It turns out the VPN truly is logless and only logs the following information:

This is something that almost all the VPNs out there do. It doesn’t invade privacy and only helps the company make its services better.

In clear terms, note that your IP address, the new IP you connect to or the websites you visit are not logged.

Generally, I discuss the UI section because it’s important. It decides the ease (or hardship) with which you and I can use certain software.

However, in this case, I’m discussing this because it’s so unique, different, clean, minimalistic, and refreshing.

When you launch the application, this is what you see: 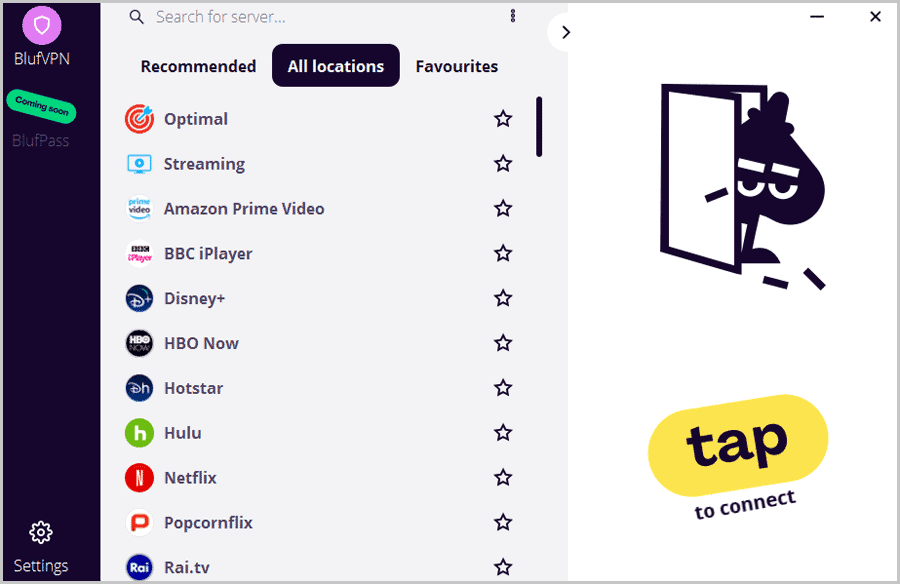 The first thing I noticed is that it doesn’t list the “countries” at the top. Rather, we get a list of streaming platforms.

Depending on what you’re trying to unblock, you can simply select the platform and the VPN connects to a server that can unblock that platform.

To access the settings for your VPN, the app provides the gear icon at the bottom-left.

Even if you’re the dumbest human on the planet, you can see that big yellow “tap” button. It’s a one-click connect button and instantly connects to a suitable server!

While not a major “feature”, I do like that it allows me to connect my favourite servers and streaming platforms (by clicking on the star icon). These then appear in my favorite tab,  this saves time as I don’t have to scroll through hundreds of other servers repeatedly.

No. of servers and countries

The number of servers is important because more servers equal less sharing and more speed. BlufVPN has a huge arsenal of 500 servers.

As for the number of countries, you can connect to over 60 countries. For a few major countries, it also offers multiple city-choices! This is great if you need to connect to a very specific location. 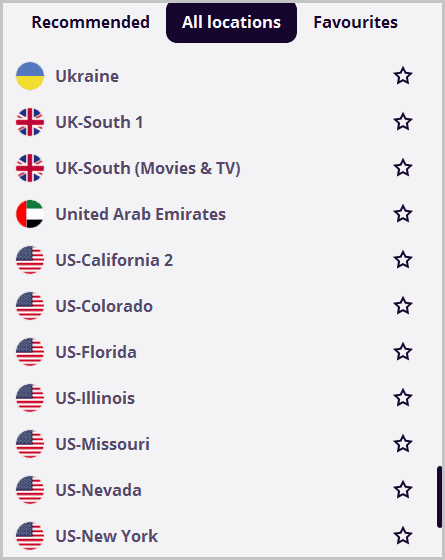 By industry standards, this is pretty impressive. Even the best VPNs out there offer a similar number in terms of servers or countries!

This isn’t a feature that’s very rare or unique. In fact, it’s one of the most common yet most practical features most VPNs out there provide.

So, when you’re browsing the internet, at times the VPN connection automatically drops. There are many reasons why this may happen.

Point is, if your VPN connection drops and you continue browsing the internet, you just leaked your original IP address.

The Kill Switch protects against this. If you enable the kill-switch, your Internet connection is automatically terminated if your VPN connection drops in the background.

This probably isn’t important for a majority of the population. However, if you’re an advanced user, you may like choosing your connection protocols manually.

These protocols basically define your connection speed and anonymity.

Do note that an average user never has to touch this. The VPN automatically chooses the best protocol and connects using that.

TCP and UDP protocols are the most common protocols out there. TCP stands for “Transmission Control Protocol”. It’s comparatively more reliable than UDP.

That’s because TCP checks data packets after sending them, verifying that they’ve been delivered.

On the other hand, UDP prioritizes “speed” and doesn’t check data packets for deliverability. While it does become less reliable, for gaming or other purposes where “speed” matters, UDP is better choice of the two.

IKEv2 is a great choice when you need speed and stability. IKEv2 doesn’t function alone and uses IPSec key exchange.

IKEv2 is one of my favorites because of its stability. It keeps the connection alive during network changes or minor downtimes!

I’m sure you’ve guessed this by now, especially after reading the UI section on this BlufVPN review.

Yes, it lets us unblock almost every streaming service out there. The list includes:

Now, if a VPN can unblock “Netflix”, it’s pretty strong. That’s because Netflix has probably the strongest VPN-detection firewalls in place.

In a nutshell, if you don’t care about privacy and only need unrestricted entertainment, even then BlufVPN may be worth a try!

Which are the devices or operating systems you can use BlufVPN on? Almost everything!

You can use the VPN on:

The only OS it’s missing is Linux. It’s still acceptable considering most of you reading this BlufVPN review probably aren’t using Linux anyway.

Most average families consist of at least 3-4 family members, don’t they? Buying a new VPN for every single member is pain and impractical.

To counter that, BlufVPN lets us use the VPN on 5 devices simultaneously. The devices can be totally different from each other.

Meaning, you can be using the same account on an Android phone, an iPhone, a Windows computer as well as a Macbook.

The features do sound like rainbows and sunshine, is the pricing any different?

Well, here are the BlufVPN plans:

Now, comparatively, I’d say the plans are in sync with its competitors out there.

The good news here is that there’s a “no arguments 100% refund policy” that’s valid for 30 days!

I’d say a month is more than enough to decide if the VPN is the right choice for you, isn’t it?

I believe in going the extra mile, why would I leave my credit card on file with something I’m using to “hide” myself, right?

Fortunately, BlufVPN offers a mode for everyone, which includes:

Tip: If you take my advice, use Tor to visit the VPN website and download the VPN. Use crypto for the payment. Also, create and use a 100% fresh e-mail that you’ve never used anywhere else! That would make you invisible.

I’ll be honest, the support isn’t impressive. In fact, this is probably the most disappointing aspect on this entire BlufVPN review.

The company does claim “24X7 live chat and email support”. However, I couldn’t find a live-chat interface anywhere. Not on the website, not within the app, not after logging in to my account.

E-mail support still works and is impressive. However, I believe live-chat is something that’s a must in today’s fast-paced world, isn’t it?

Let’s sum up the best and “not best” features of the app then?

Is BlufVPN the best VPN out there? No. I say that because it still has a few areas which require improvement.

However, in terms of speed, security, and other features, I’ll say it’s totally one of the top 5 VPNs on the planet today.

The VPN suits not just privacy-lovers, but also those looking to bypass censorship and/or stream blocked content.

Why don’t you give it a try? Its 30-day “no arguments” refund policy makes sure you get every cent back if you don’t like it!

In a nutshell, I’ll rate the VPN 4.5/5 and that should conclude this BlufVPN review.

« 5 Best CRM for Startups
eSputnik Review: Is this Marketing Automation Software Worth it? »