In this Do Your Data Recovery review, we’ll see if it truly is the best data recovery software or that’s just a marketing tagline.

I’ve tried and tested every single feature that the tool offers. You’ll get the most detailed, honest and transparent idea of the tool in the next few minutes.

If you’ve ever lost data, keep reading and you’ll probably get it back in less than half an hour.

According to a study by David M. Smith, PhD, Pepperdine University, over 83% of data loss happens due to just 3 reasons! Hardware failure, human error or software corruption.

DoYourData is a data recovery software. It’s capable of recovering data from nearly any and all extinction events.

Doesn’t matter which device/OS you’re using either. It has a pretty long list of possible recovery sources.

In this Do Your Data Recovery review, I’ll discuss if it truly is the Windows data recovery software that it claims to be.

Before we start, note that it’s a service which only asks you to-

“Pay only if you found your lost file!”

So, you can read this review without being scared of it being a sales pitch.

Why should you believe this review?

I’ve read dozens of reviews on blogs, from authors who never even touched the actual software.

I wish to ensure that never happens here.

Hence, almost every software that I review here is personally tried and tested by me.

In any of the screenshots below, you’ll see I’m using the licensed, “professional” version of the tool.

All the screenshots are captured by me, and that proves I did actually use this software.

So, every statement here is based on pure experience. Not on what the website/software “claims” on its official website.

This is probably the most important aspect on this piece.

Any tool, no matter how feature-rich, is only good if it’s “usable”. In this section, we’ll see how hard/easy it is to understand or use DoYourData.

Here’s the welcome screen you see when you first launch the tool: 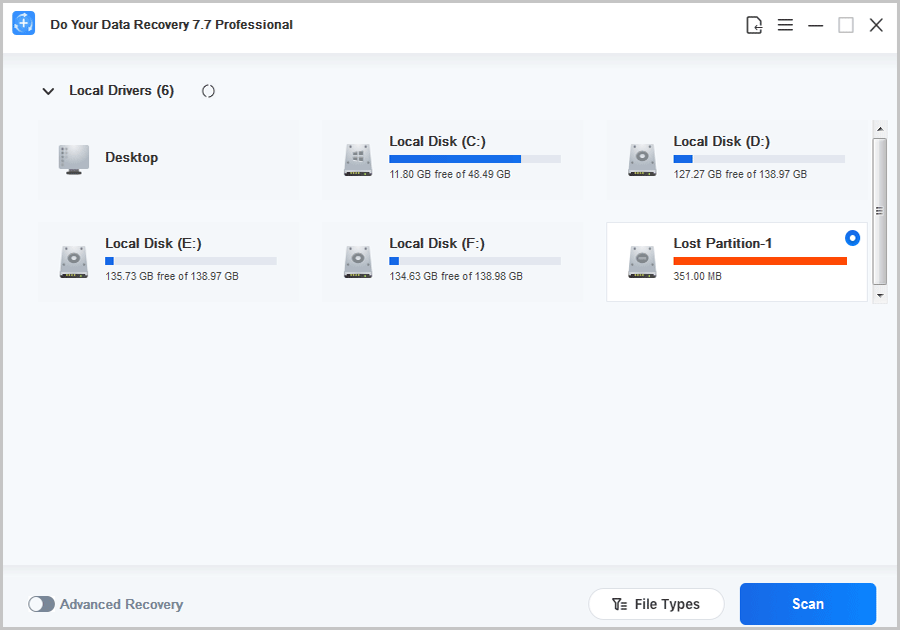 It shows the local drives on your computer.

Clicking on any of the drives scans the entire drive. It then shows the lost files which have been found. 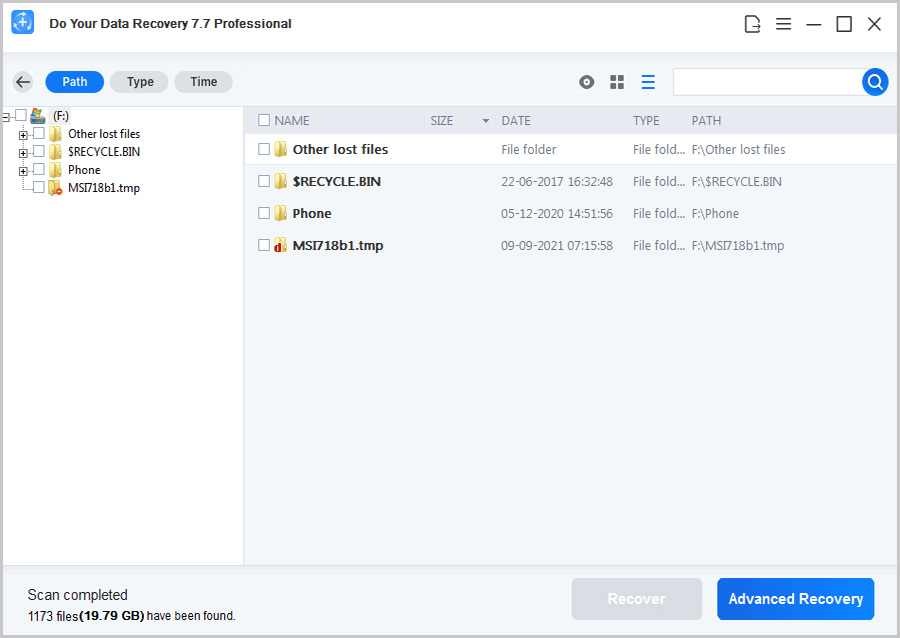 I liked the fact that it’s automated. I don’t have to manually “scan” something.

In fact, if you pay attention to the screenshot above, it already found a “lost partition” for me. I didn’t even know I had that. Wasn’t looking for it. It just appeared for me.

Its filters are another feature I’m in love with.

So, I can filter the found files using:

In the above screenshot, the found files are sorted based on their file type. That makes things very easy, doesn’t it?

I can also opt for the time filter. It categorizes the found files based on dates! Again, it’s helpful if you remember an estimated date/time when you had the file on your system! 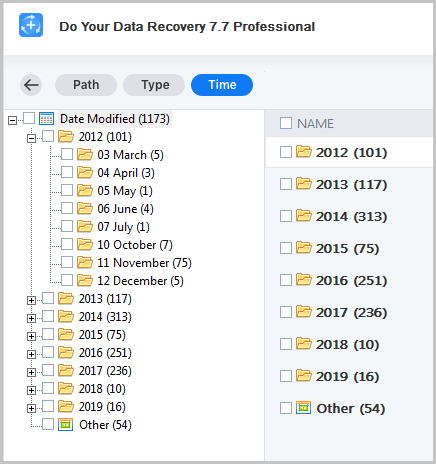 Recovering is pretty easy, I can simply tick the files I want to recover and click on the “recover” button.

All in all, I’ll say DoYourData is pretty easy to use and requires no previous experience/skills.

DoYourData offers two recovery modes. This is important because it has a direct and serious effect on speed.

The normal mode is enabled by default. It doesn’t need to be “activated”.

On the other hand, you can see an “advanced mode” toggle button at the bottom of your screen.

When the advanced mode is enabled, it scans deeper. Note that this obviously results in slower scans. However, it also is capable of recovering more files than the faster, normal mode.

Fortunately, DoYourData scans are read-only. Meaning, it doesn’t overwrite or mess with your existing files in any way.

You may not want to recover “everything” for the most part, right? Why then scan your entire hard disk?

DoYourData lets you select the “type” of files you can scan selectively. When you exclude everything else and only scan for one file type, you can increase the scan speed exponentially. 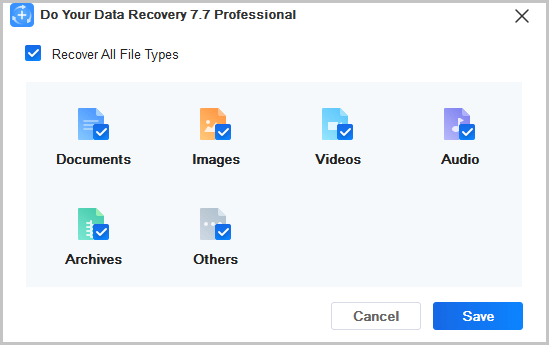 This isn’t a massive feature, however, it’s still something that eases things up.

Why is this worth discussion?

It sucks if you have to start a 500GB or more scan all over again for whatever reasons, right?

DoYourData lets you pause your scan and resume it from this point at a later time.

This is another feature that saves a ton of time!

Imagine you’ve scanned a massive disk/storage device. You do your thing but forget to recover a specific file.

You’ll have to rescan the entire drive again, right?

It has this “export scan result” feature.

You can export the data and import it later. Importing the data will let you access the found files even without having to re-scan the device again.

Which files and devices can be recovered?

Basically, “anything that you deleted/lost/got corrupted” is the simple answer.

However, let me give you a list just for a clearer idea. You can recover everything including:

As for devices,  DoYourData can recover files from:

Windows 11 (and other OS) supported

This is probably the most impressive aspect on this DoYourData review.

It’s one of the few recovery software which didn’t become obsolete with the launch of Windows 11.

Rather, the software totally supports Windows 11 and can be used to recover deleted files in Windows 11. It still retains all its speed and data recovery capabilities.

Obviously,  different Windows versions are supported as well. The software can be installed on:

It even has a Mac version.

Just the “features” don’t make any tool the best data recovery software for Windows, right? The pricing must be rational and reasonable as well.

So, it offers a 100% forever free plan! You can not “recover” data using the plan, but you can preview your files.

This actually is a neat feature. It makes sure you only pay if you find whatever you’re looking for.

As for the paid plans, 3 of those exist. The features are almost identical across all, it’s just the billing cycle that makes all the difference.

All of these plans let you use the software on 2 PCs.

In my experience, the tool does work. So, $89.00 to make sure you never lose files ever again? Sweet deal.

To top it all up, the company even offers a 30-day refund policy! So, you pay, you download, you use the software. If you feel you didn’t get your files, you get your money back!

Before we conclude this DoYourData recovery review, let me answer some of the most basic questions you may have about the tool.

No. It sure can “access” your files when you’re recovering your files.

However, the software/company doesn’t retain any access once the recovery process is complete. Your data is never stored with the company either.

Let’s be honest and practical. That’s not possible. That probably isn’t possible even for the FBI or NASA. It recovers most files, but not all of them.

#3. Will DoYourData slow your computer down?

It won’t. The software is less than 10MB! That’s smaller than some photos your cameras capture. It doesn’t eat up your CPU resources.

#4. Can you use the software for commercial purposes?

Do Your Data Recovery Review: Is it best data recovery software?

So, let’s talk about what makes or breaks these software?

Speed, ability to recover files, ease of use and price.

The ability to recover files isn’t always 100% there. I’m just being honest, I’ve not always found every single file I ever wanted. But, (almost) all the times I did. So, I’d say that’s as good as it gets.

The ease of use is pretty evident if you go through the “user-interface” section on this piece.

And finally, the pricing is impressive because of its 30-day moneyback policy. Didn’t find your file? You get a refund, simple.

So, in a nutshell, DoYourData is as close to the best data recovery software as we’ve seen in recent times.

« Hunter.io Review: Should You Buy this Email Hunter?
AweEraser Review: Is It Best Data Erasure Software? »