In this Hello VPN review, we will discuss and test the VPN and all its features. Is it fast? Does it provide enough countries to connect to? Is it secure?

As always, I’ve personally used the VPN and tried it out. This review is solely based on my personal experience with the app.

Do note that I’ve used its Android app. You may find slight differences with its other versions. However, the fundamentals would remain the same.

If you’re looking for a VPN, or need to unlock content/websites, this Hello VPN review may be worth your time.

What is Hello VPN?

It’s A VPN- Virtual Private Network. Most of you on this Hello VPN App review probably already knew this.  However, let me explain for the uninitiated.

Hello VPN primarily changes your IP address and encrypts your connection. The IP address is how you’re identified on the internet. If you change your IP address, no one can link any of your activities to you.

Generally, when you use the Internet, your ISP knows everything you do online. With a VPN, you are no longer using the IP provided to you by your ISP.

The VPN provides you an IP address of its own. Your real IP is hidden, and this VPN IP is then used to connect to the internet. When traced, it’ll lead the tracer back to the VPN servers and not to you.

Another benefit of Hello VPN is you get access to all websites. Most websites are generally blocked based on IP sets. By changing your IP, you’re fooling the websites and hence you can access almost everything.

It also protects against open, public WiFi networks. The networks in cafes and public places are extremely vulnerable and easy to hack. The VPN makes it that much harder.

What level of computer skills do you need to use Hello VPN? That’s what I’m answering in this section.

While I generally use a VPN’s desktop version, for this Hello VPN review, I’d like to use its Android app! Most of you reading this are probably on a mobile device anyway, right?

So, this is your welcome dashboard: 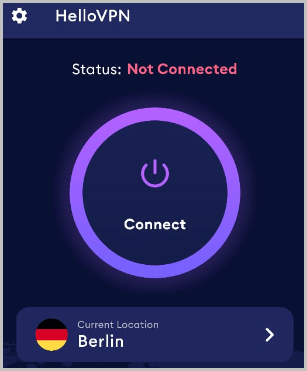 Establishing a connection is extremely easy. You only need to tap on the “connect” button at the center. A single tap and you’re invisible to the world! No other change in setting/options or anywhere else required.

There’s that tiny setting option on the top-left. Non-intrusive and yet pretty easy to find and use, right?

Clicking on that brings up the settings options. You can change a few settings, contact support, check your plan details here.

I’ll explain the other options shortly, however, it’s pretty clear that you don’t need to be a rocket scientist to use Hello VPN App.

A VPN’s primary weapon is its list of available countries, right? The more countries it offers, the more IP addresses and location variety you’ll get.

More countries also mean you can unlock content from more countries. This is especially helpful when searching for the best VPNs for Netflix in 2023. 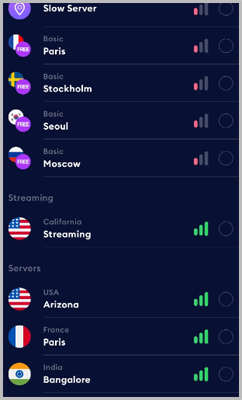 It offers a a total of 17 countries  to connect to (I counted). As for the number of IP addresses, you’ll get a new IP every time you connect, even to the same country. The company offers over 1000+ IP addresses.

Also, it has specialized “streaming” servers as shown in the screenshot above. These are servers which will offer the fastest streams and least buffer (if any).

Now, am I impressed? Not exactly. I’ve been with VPNs offering 60+ country options. But then, if I compare Hello VPN’s pricing to those VPNs (it’s free to try), I’d say it’s totally worth it.

Moreover, being very practical and honest, 17 countries are still more than what most of us ever connect to! Generally it’s just a few countries we connect to regularly, isn’t it?

Fortunately, Hello VPN does have a strict “no log” policy. It clearly mentions that it doesn’t store:

There’s another section where it explicitly mentions that no personal information is collected. This means your name, e-mail ID and nothing else which can be used to identify you personally is collected.

This is exactly what I look for in any VPN worth my time. This means, even if Hello VPN is forced by governments and other agencies to reveal my identity, it can’t!

It’s one of the very few VPNs out there which doesn’t even demand registration! You download the app and it auto-assigns an “user ID” to you. It’s a random string of alphabet and numbers. It can’t be linked to any individual directly!

Now, do note that it does collect some information but it’s limited to:

*I’m not sure what the “in-app analytics data” includes. However, according to the policy mentioned above, it can’t be anything which identifies you.

When trying out any new VPN, paying attention to its jurisdiction is a must. By that, I mean the rules and laws the VPN company has to comply with.

E.g. it’s not a good idea to go with any company that’s based in the U.S/U.K or any of the other Five-Eye nations. That’s suicide for your privacy and anonymity.

Fortunately, Hello VPN is based out of Estonia. It’s one of the most desirable countries in terms of digital privacy laws.

This isn’t “the” most impressive aspect on this Hello VPN review, however, it’s pretty desirable.

The VPN supports kill-switches which increase security. When enabled, the switch basically disconnects the entire connection if and when the VPN connection drops.

This is done so that you don’t accidently leak your IP address. At times the VPN connection drops in the background. That’s exactly what the kill-switch protects against.

So, which devices is Hello VPN compatible with? Most, if not all of them. The VPN offers native apps for:

I did find the lack of a Windows version troublesome. However, I’m confident it’ll be added in the near future.

The biggest problem with VPNs? They slow our connections down. It’s a fact, and true for almost every single VPN out there. Because of all the IP-changes and encryption, your internet speed is bound to be affected.

However, “how much” of that speed is reduced by a VPN determines its quality, right?

Now, Hello VPN offers choices here. If you go with its free plan, the speed is slower. They’re honest and upfront about it. In fact, even in the app, you can see less network-bars on the free servers. (Refer to the screenshot in the “Available locations” section above).

However, on the paid plan the speed is more than impressive. I’ll not say much, rather show you. Here’s a speed test with the VPN enabled (the IP can be verified to be that of the VPN): 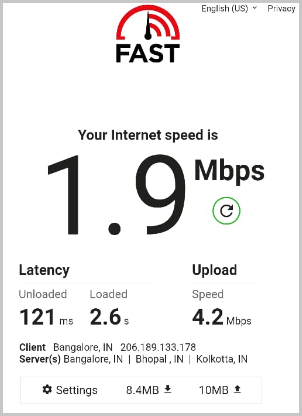 Now, my normal (non-VPN) speed is about 5 MB .There sure is speed reduction but it’s nothing devastating and I can still stream and browse without being affected.

While I don’t generally need “support” with a VPN, I’d like to include it in this Hello VPN review for the sake of being detailed.

Now, they do offer live-chat via their mobile app.

Additionally, you can reach them via e-mail. When using the app, there’s an in-built support option as well.

They reply within a few hours at max. The replies are pretty cordial, easy to understand and without useless redirection to links and articles.

So, is Hello VPN worth it? I’ll be very honest, it’s not the ‘best’ VPN on the planet. But when you need to evade hackers, govt. and just need some privacy, it’s totally worth it.

In fact, because of its streaming servers, it’s perfect if you’re trying to stream blocked videos as well. The company also assures that the used protocols are secure and strong hence you aren’t getting hacked anytime soon.

Moreover, all of its plans offer a free trial for now. Hence, you don’t really have to trust this Hello VPN review. Just download the VPN and you can start using it right away.

« SlideUpLift Review: A Platform for Your all Presentation Needs
HostArmada Review: Is it Good Choice to Host Your Blog? »