This Nubia Red Magic 5S review will talk of everything that you can (and can’t) expect from the phone.

Let’s be honest and real, this isn’t a massive upgrade from the Red Magic 5G. However, an upgrade it sure is at least as far as storage technology, minor software and design go.

Now, for the purposes of this Nubia Red Magic 5S review, I’ll assume you’ve not used or know of the Red Magic 5G and proceed accordingly with the information.

For starters, let’s just say there probably doesn’t exist any other phone offering these specs, at these prices. (Although, it obviously isn’t perfect.)

So, let’s start with the overview? 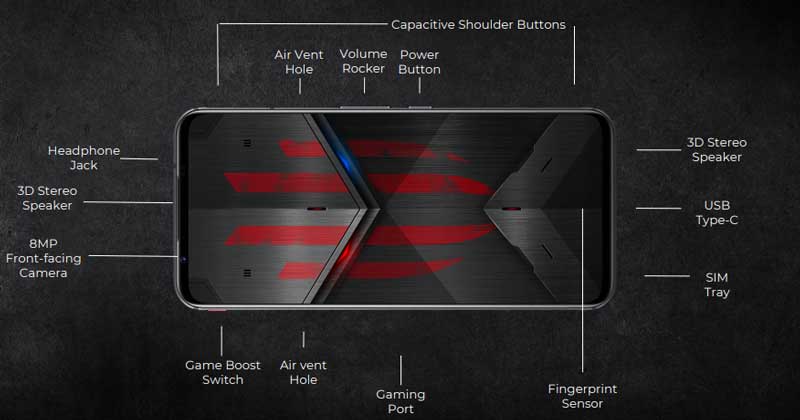 Before you commit to this Nubia Red Magic 5S review, here’s an overview which will tell you if it’s worth your time and money right here:

Satisfied? If yes, dive deep into the details below.

Now, the RM5S markets itself primarily (and exclusively) as a Gaming beast. In fact, it clearly states that its “mission” is to empower gamers game better.

Now, the “screen” is what matters more than most users realize when it comes to gaming.

As has been its history, this is the world’s first mobile to offer 144Hz refresh rate.  Now, you get clear advantage over anyone playing on the standard 60Hz or the 120Hz screens.

Technically speaking, this is the best screen-experience as far as refresh rate goes in the entire mobile industry. Also, it’s future-proof. Even when games upgrade their FPS support, the RM5S will still be compatible.

If you go through my Red Magic 5G review, you’ll see how the screen is capable of holding a stable frame-rate throughout.

And, it’s not just the games which are better. Overall UI, scrolling, swiping and everything else feels exponentially better as well.

Then, there’s a 6.65 inch esports AMOLED display. In laymen’s terms, you get better colours and it reacts faster.

However, because the AMOLED displays emit less heat than the standard LED screens, they also are more battery efficient. Just what a gamer needs, isn’t it?

The display is more than impressive. It’s offering 1080 X2340 pixels and 387.5 pixel density. Now, there are phones offering a similar display, but they’re priced a lot higher than the Red Magic 5S.

I’m not sure how far the screen brightness matters to you, it does to me. Well, at 600 nits, I’ll say the brightness is pretty good. Not the “best”, but better than most.

Its TÜV Rheinland Certification and DC Dimming features makes sure it’s eye-safe for your kids, family members or even yourself.

Finally, the TSR (Touch Sampling Rate) is 240Hz on the Nubia Red Magic 5S. Without getting into technicalities, let’s just say even the iPhone XR doesn’t not offer a TSR even close to 240Hz.

If you’re a gamer, you’d agree “heat” is your biggest enemy. No matter what’s the price-point of your device, if it heats up your frames will start dropping, period.

To counter just that, the RM5S brought in “Trinity cooling”. Well, it’s just a fancy name for a very (very) advanced cooling system.

So, it’s not just limited to a “physical fan”. But, it also brings in liquid cooling. These aren’t “unique” features, but, given the price-point I’d say sure are a welcome surprise.

It also uses multilayered graphite material inside the device which helps transfer and dissipate heat much better.

The back panel also features a silver plate. Why this matters? It enhances cooling, but, more importantly, can be docked to the Ice Dock.

The IceDock is an additional fan (not included in the box, needs additional purchase.) You dock the fan on the silver plate, and it keeps it cool, simple.

Now let’s talk of the physical fan inside the phone. It has the highest speed of 15,000 RPM with an advertised ventilation increase of 45%.  The 4000mm² air duct further provides spacious air-travel area enhancing cooling.

This fan also is turned on when charging the device which keeps it cool.

And finally, it boasts of 10 temp-sensors. These basically sense the temperature and when it needs controlling, auto-activate the ICE 4.0 for cooling.

These are arguably the most important factor when deciding on a phone, aren’t they? Especially when a device boasts of being a game-centric machine.

So, it uses the Snapdragon  865 5G. This means it also offers “Desktop Forward Rendering (DFR)” and the “Qualcomm® Game Smoother” as marketed with the processor.

While the DFR makes sure the gaming experience is much closer to PC gaming, the Game Smoother takes care of the frames and rendering.

The SD 865 processor also brings in the Kryo™ 585 CPU. Simply put, it has been proven to be 25% faster more power efficient than its predecessors.

The Adreno 650 GPU takes care of whatever else is left when it comes to every inch of gaming advantage.

The CPU can be clocked up to 2.84GHz. Now that’s some serious power.

I’ve mentioned repeatedly how it boasts of being a gaming beast. Well, it makes good on that promise by offering in-built, capacitive shoulder triggers.

These are mounted on both the left and right shoulders of the phone. Being capacitive, you don’t need to “press” them rather they’re touch-sensitive. 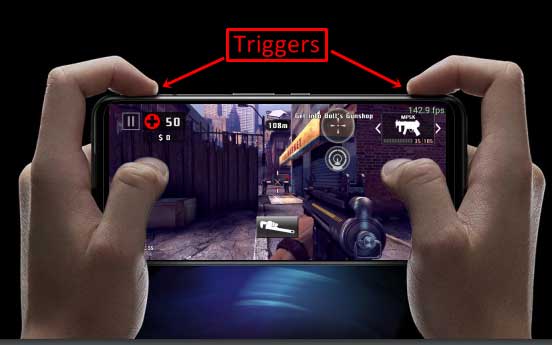 Their 320Hz Touch Sampling Rate is impressive.  That’s not all, the touch delay too is limited at 2ms. That’s almost a non-existent delay, isn’t it?

These buttons can be assigned to any button on screen. Just slide the L and R marks on your screen on top of the button you want to use them for.

Now, let’s talk of the Game Centre, or Game Space as the company likes to call it. There’s actually a physical button on the device which turns this on.

It’s where all your games can be accessed from. However, its primary purpose is letting us control gaming-related settings.

For starters, you can control or block notifications and calls from here. Who likes a text when you’re about to take that headshot, eh?

Then, it has a built-in recorder. Got killed by a hacker? Or, maybe you’re a Youtuber (or, wish to be one?). Whatever be your reason, it allows recording games in ultra high resolution.

It even has a 4D Shock feature which basically turns on vibration-effects for a better gaming experience.

More importantly, the Game Space also lets you control your fan speed as well as refresh rate. You don’t always need to max it out, right?

So, a lot of you reading this Nubia Red Magic 5S review are either hobby-photographers, or camera is just a very important factor for you.

I’ll be blunt and honest right here. If “camera” is your top-most priority, this isn’t for you. It’s a gaming device. But, let’s look at the specs first?

It boasts of a triple camera setup. As in, it physically has three different cameras installed. A 64MP SONY IMX686 at its core, an 8MP Ultra Wide camera and a 2MP Macro camera.

As far as recording capabilities go, it has the potential to record upto 4K videos.

It also has a Super Night Mode which basically lets you capture well-lit photos even in very dark areas.

There’s also a Pro Mode which among other things, lets you switch to the ultra-wide camera that it features.

The front camera, or selfie-camera as some call it is a basic 8MP. Nothing too fancy.

All in all, I’ll say the camera is very good. But, there do exist other devices at the same price-point which will offer better photo qualities. Obviously, they wouldn’t offer any of the other advanced features the RM5S does.

I’m sure you already know the importance of a good battery life. Gaming is probably “the” most battery-draining task out there on a mobile (or, even a laptop.)

It comes with a 4500 mAh battery. Not very impressive. I’d have liked if it was a 5000mAh+ given how “gaming” is the primary purpose.

Fortunately, it’s compatible with a 55W quick charger but that needs to be purchased separately. The in-box 18W charger is pretty standard.

I mentioned earlier in this Nubia Red Magic 5S review that this one has an upgraded storage tech than the RM5G.

Well, the upgrade is basically that it features UFS 3.1 storage as compared to the UFS 3.0 that the older version featured.

Now, considering you aren’t into tech much, this simply means that the device features slightly faster write speeds, up to 1445MB/second.

It’s available in multiple variants. The base model features 8GB RAM LPDDR5 while there are two other variants for 12 GB and 16GB RAM.

Being LPDDR5 means it’s faster than its predecessor, the LPDDR4x.

Lastly for this Nubia Red Magic 5S review, let’s look at some of the other basic features?

The speakers are pretty good. But, that’s expected given how sound is a major aspect of games anyway. Although, at the maximum volume you may notice a slight disorientation.

But then again, I doubt you’ll be playing any games without your earphones. Either way, the speakers are more than acceptable.

It has all the sensors you need for gaming or any other activity. This includes Fingerprints, Gyroscope, G-sensors, Light sensors, Proximity sensors and a compass.

As for the network, it supports 5G and everything that came before it. Obviously, it doesn’t make much difference because 5G is yet to be received by a majority of the countries. But well, the device supports it.

Lastly, the RGB lights aren’t missing either. What’s a gaming phone without RGB lights, eh? These are fully customizable, as expected.

So, finally, let’s address the pricing. It sells two of its variants for the following prices:

Now, the Nubia RM5S isn’t exactly “cheap”. But, for these specs, you can’t expect it to be.

If you look at the hardware and performance, I’d say it’s a rationally priced device.

The best and “not so good” features at a glance:

So, is it worth it? Or, should you rather spend that 500-something dollars somewhere else?

It really depends on your goals and use-case. Are you a gamer? How important is gaming to you? Do you game for really long hours? Do you wish to have every single edge in a battle? If yes, then the Nubia Red Magic 5S is for you.

As mentioned earlier, if you need a “camera phone”, you’ll find better alternatives at $500.00 in the market.

But, then again, even if you aren’t a gamer, and the pricing is within your budget, there aren’t many other phones which will offer similar performance for this price.

I’ll just say that, if you do get this phone, the next time you die in a game, it wouldn’t be because you lagged or your ping spiked. It’ll be because the opponent was just better, accept that.

And that’ll be all for this Nubia Red Magic 5S review folks. I’d love to hear what you think of the device, its price-point and offered specs. Just drop your comments in the comment-box below.