What are the benefits of outsourced IT support? If that’s your question, you’re exactly where you should be.

I’ve discussed as many as 9 benefits of outsourced IT support. Here’s a quick list of the benefits if you’re in a rush:

Here’s some additional data which proves despite the 2020 Corona virus, majority of the industries are actually outsourcing more of their IT support jobs. 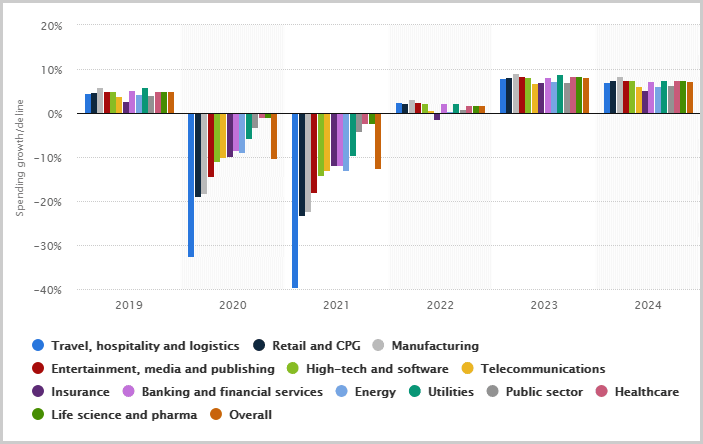 The downtrends in the graph above are only in those industries which were hit the worst by the pandemic, e.g. Travel.

Point being? Outsourcing is in fashion and practical. You’d soon see how and why if you just keep reading.

The biggest benefit of outsourcing IT support? You’re not paying them just for “existing”.

When IT outsourcing services, you only pay them if and when you use their services. More importantly, you only pay for the exact services you employ them for.

On the contrary, with an in-house IT support, monthly salaries need to keep rolling regardless of the amount or level of service provided by the team.

Outsourcing thus helps you get the maximum bang for your buck while retaining a large part of your budget.

2. Low or none hidden/extra costs

An in-house IT support team isn’t just a bunch of IT-professionals. You’ll also have to provide them workspace, Internet connection, set their salary accounts, coordinate with your finance department and a lot more.

At times, you may even be required to provide specialized training to your in-house team.

On the other hand, none of that is your problem when you’re outsourcing. The outsourced IT support generally take care of everything they need. You simply pay out the fee and they solve the problem, period.

3. Compliance to regulations and certifications

When you hire an in-house IT professional, he/she is just an IT professional. You’re generally responsible for their knowledge and compliance to regulations and norms.

Outsourced IT teams on the other hand are updated on the compliance norms and guidelines.

When you “hire” an in-house IT team, quite a few strings get attached. Insurance, holidays, workplace environment, work-hours and at times even potential lawsuits.

Outsourcing frees you from all that. Most of these decisions depend on the outsourced team. Additionally, situations leading to a lawsuits or claims are less likely to occur with an outsourced team as compared to in-house employees.

An in-house team also would need to be managed. That means you’d need to monitor  and handle the entire department. This requires personnel, and those personnel will invest time in doing all of these things.

On the contrary, not having an in-house team means you’ll save personnel and as a result, time. These people can then work on the core aspects of your business such as design, marketing or anything else.

Moreover, your firm may not be IT-centric, however, IT is something every company needs. Isn’t it just simpler to outsource your IT needs rather than creating an entire department or making IT one of your core focuses?

An in-house IT team generally only solves the problems which arise. Because their job is somewhat guaranteed, they may or may not make extra efforts to find other hidden loopholes and security risks (they get paid either way, don’t they?)

Moreover, in-house teams may not even be aware of some loopholes due to their tunnel-view perspective dealing just with a single company.

Outsourced teams however have a considerable edge. They may point out other hidden, less dangerous yet harmful problems with your IT structure. That’s primarily because outsourced companies have multiple clients, as a result they face and solve a much wider range of problems than an in-house team.

7. Compete with the giants

Let’s say you aren’t a multi-million dollar corporation. You’re just a group whose core company isn’t based around IT.

It’s a nightmare trying to compete with the big fishes out there, isn’t it? Now, when you outsource your IT needs, you’re hiring people who live and breath IT.

This generally means they have cutting edge technology. You don’t need to give them a fancy new lab. Rather, you get all their expertise as well as tools which now enables you for a fair competition in the industry.

This may not be a direct benefit of outsourced IT support but it sure is one. As mentioned earlier, outsourcing helps you save time, personnel, money and basically the overall operating cost for your business.

This can be reflected with your products and services! Being able to offer better quality products, at a cheaper price than your competitors is the ultimate goal in any business, isn’t it?

In fact, according to this Deloitte survey, “cost cutting” is the primary reason why companies outsource! 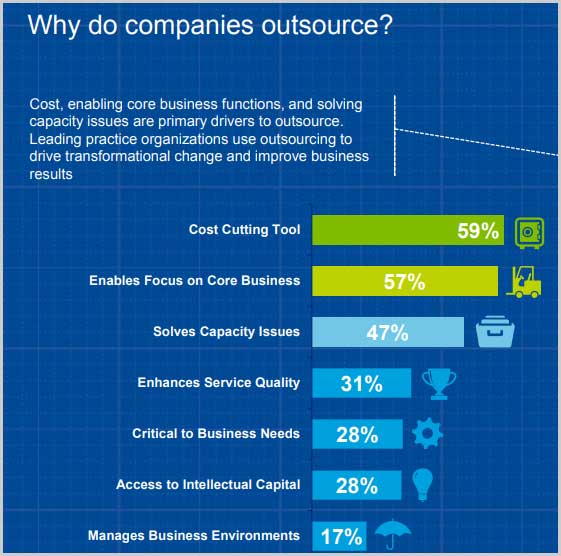 Said “cut costs” can then be diverted to any of the other areas of improvement, e.g. cheaper products.

An in-house team only works the work-hours. Well, your IT problems don’t know that? They can show up just about anytime!

When you’re outsourcing, you generally pay for the “number of hours” or “number of people” . This often covers a 24X7 clock. So, unlike your on-site team, you can get your problems fixed regardless of when they show up.

You think you can afford a few hours of downtime? Remember Amazon losing $66,000+ each minute when it went down for 30 minutes.

Final words on the benefits of outsourced IT support

So, should you outsource your IT support then? Given the current COVID-19 pandemic, I’d say there couldn’t be a better time to do so.

Do note that the benefits I’ve discussed so far are the tip of the iceberg. Depending on your industry, budget, and goals, the actual IT  support outsourcing benefits can be way more diversified.

Although, let’s sum it up? It’s best to say outsourcing is cheaper, more efficient, legally safer, and compliments the other areas which require more attention.

No, I’m not saying outsourcing IT support is flawless. It has its fair share of issues. The majority of those however can easily be avoided simply by going with an established IT support provider.

That’ll be all as far as this piece on the the benefits of outsourced IT support goes. Is it right for you? I’d say yes, but, do your own research and weigh the pros and cons before making a decision.