Have you ever thought of using an Android app on your PC? Or maybe a game or anything that is compatible with your Android phone but not meant to run on a PC? I’m sure you do!

There comes a lot of time when we feel like using Android stuff on the bigger screen but we can’t do that as these apps and games show incompatibility towards PC. That’s the case when Android emulators come into the picture.

What are Android Emulators?

Android emulators are the computer utilities which convert any Android app or game into their windows version and makes them compatible to be played on the computer. Bluestacks is the most popular Android emulator which is extremely popular worldwide.

Bluestacks does possess some graphics and other internal errors and sometimes it behaves unsupportive towards some systems. For the same reason, some people always be in search for best free Bluestacks alternative, so that they can continue to enjoy their favorite Android stuff on Computers.

If you are also not-so-happy with Bluestacks or it’s not running smoothly on your computer, no need to panic as we have compiled a list of top 5 Bluestacks alternatives. Go ahead and pick out the best one for you!

Below are the top 5 alternatives to Bluestacks that you can consider and utilize in 2023 to convert and leverage all your mobile applications into their windows version. So, without any further ado, let’s get started! 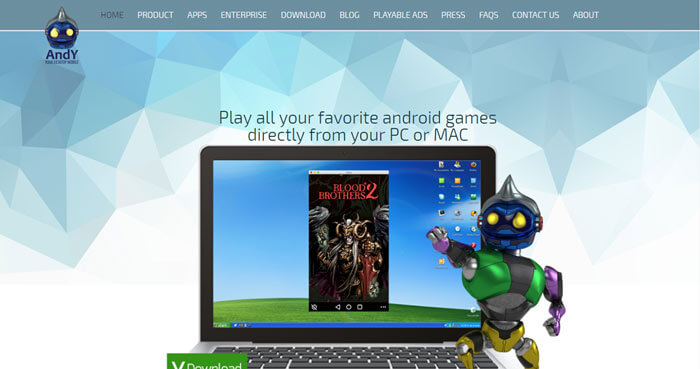 Andy Android Emulator is very Popular Bluestacks Alternative and works like a charm in converting mobile applications into their Android versions.

It’s the best Bluestacks alternative when it comes to the user-friendly interface, long list of features and compatibility towards both windows and mac. There are so many features offered by Andy that people even prefer Andy over Bluestacks, despite the Bluestacks is supported well by their computer.

So in all, Andy is a great Bluestacks companion when it comes to choosing the best Android Emulators. The best Part about Andy is being its FREE! Yes, you can use Andy android emulator without paying anything.

The features that make Andy tops our list is the full Android UI, multi-touch support, camera integration, microphone integration, ARM support, Android access to local file system and what not.

Moreover, Andy allows you to use your Android phone as a controller and also, you are given complete access to the Google Play Store where you can download any app, game, messenger app that you regretted not being available for PC use.

Another reason, that people are becoming so much fond of Andy is its seamless downloading, installation and the using process. If you still have not tried Andy as a Bluestacks Alternative, you are definitely missing out the amazing Andy features! 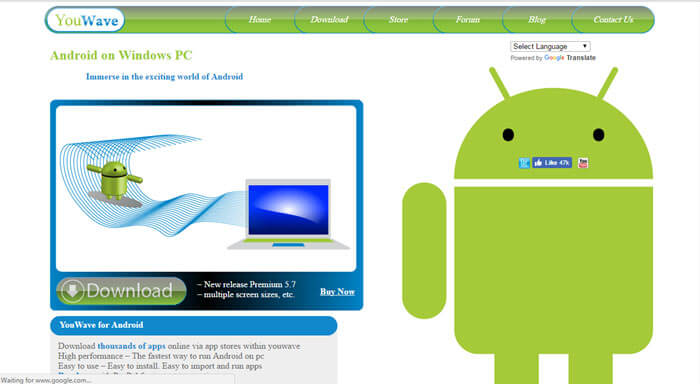 Youwave is yet another very amazing Android emulator and a great Bluestacks Alternative. It offers all the basic and advanced features you expect from an Android emulator. Youwave works as a bridge between an Android and a computer and gives you a full Android interface on your computer.

No matter if you have a computer with Window XP/ Windows Vista/ Windows 7/ Windows 8/ Windows 10 running on it, you can always go for Youwave as it supports all the mentioned operating systems and works smoothly on them.

Dynamic rotating and phone-like instant response and volume control buttons are some of the new features added in the latest version of Youwave. But the thing I don’t like on Youwave is that it doesn’t offer Google play store like Andy.

But there is an option to add third-party apps on Youwave. Another downfall of Youwave is being its premium. Although, there is a free Youwave version but only with the basic features. To utilize advanced features, you need to go premium. 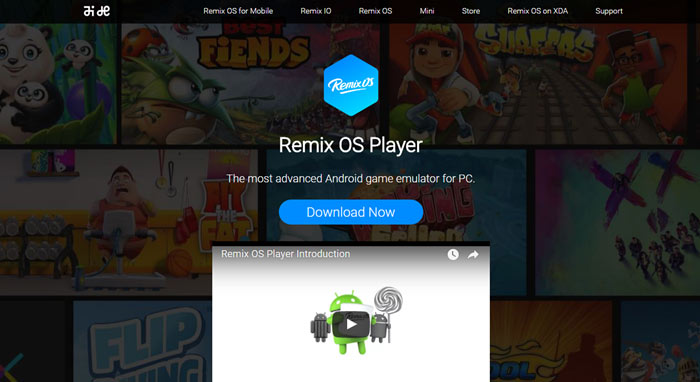 Remix OD Player, however, lets you run all the Android apps on your computer but its basically gaming oriented and is known to be the most advanced Android game emulator.

Remix OS Player gives you the ability to play multiple games at a time unlike most of the emulators available out there. Even the Bluestacks doesn’t offer such functionality. Besides, you can even talk with your competitors while playing games to enjoy your gaming experience to the fullest.

Remix OS player can be installed and downloaded very easily from the link given and the best part is, it’s completely free to use. Besides,  Remix OS Player is based on Android Marshmallow and they keep updating it to support towards the latest Android versions.

Another plus point about Remix player is that the system requirements for running it are not very high. Remix OS Player runs smoothly even with the low configuration systems. 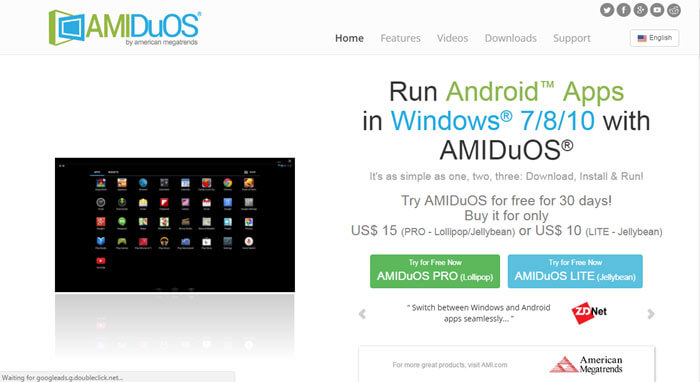 AMIDuOS is one of the extremely advanced full-fledged Android emulators. This android emulator, however, is not free but indeed deserved to be paid for.

This amazing Android emulator is known to be supporting every range of Android versions and works great on all the operating systems including Windows 7,8 or 10 and even tablets.

AMIDuOS is extremely easy to download and works super fast on the supported devices. Moreover, the interface of AMIDuOS is intuitive and it’s not really hard to get on to it even for the first timers.

AMIDuOS gives you a complete Android experience on your computer and even supports mobile gestures like Pinch and Zoom and an Android-like keypad. Besides that, its also shows compatibility towards GPS and Compass, while other emulators don’t offer such advanced features.

There are certainly more features in the list like file sharing between PC and the Android, support for 3D acceleration for amazing gaming experience etc which makes AMIDuOS one of the leading Android emulators around.

AMIDuOS comes free for only 30 days. If you want to continue with it even after 30 days, you have a pay a nominal price of $15 for the pro version and $10 for the LTE version. Pro version supports both Lollipop/Jellybean while the LTE supports on the jellybean.

All in all, it’s a superb Android emulator which deserves to be given a shot.

Read Next: How to Get Free Google Play Credit 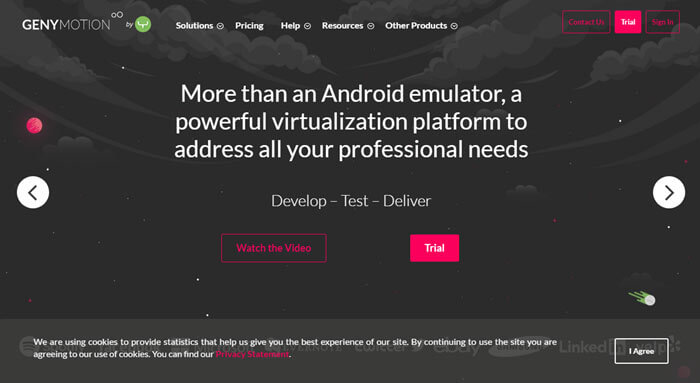 Last but not the least, the 5th Android Emulator which is considered as a great Bluestacks Alternative is Genymotion.

Genymotion is designed more for the professional use than the personal. Genymotion is a trusted Android emulator app which runs Android apps very smoothly on the computer.

It is basically used by the Android developers who create apps and wants to test their apps on the bigger screen. Genymotion provides with the advanced functionality to the app developers to test the beta version of their apps to make them create the error-free and powerful products.

Genymotion is not free and it requires you to pay to pay some amount in order to use it. The pricing plans offered by Genymotion comes in three different packages Indie, business and enterprise with a different set of features.

So, only go for Genymotion when your purpose is more official than personal and you are ready to pay for it. For FREE solutions, you can go for above-mentioned free Android emulators like Andy, Remix etc.

We all at some or the other point think of using Android apps or games on the bigger screen to make full out of them. Android market is rich. There are a hell lot of beautiful games, apps and other stuff that are designed to be played on an Android but are not always available to be used on PC.

Let’s take an example of the most popular Android game Clash of Clans. This game is super cool and people want to play this game on PC as well, but unfortunately, this games is only available for Android users and not the PC users.

But using Bluestacks or any other Bluestacks Alternative, you can enjoy this game on the bigger screen without putting many efforts and without having to pay you anything!

I Hope you enjoyed reading the article and it turned out as a useful one. If you have any feedback, doubt or query, fill out the below form and let us know in the comment section below. We will reach out to as soon as possible!