BulletVPN Review: There are quite a few VPNs out there in the industry, and trust me when I say that I’ve been with nearly every single one of them. But not all of them make it out to our reviews section. The one VPN which did, and is probably already known to you is, BulletVPN.

The prime reason why the thought of scribbling this BulletVPN review crossed my mind was because of the features the VPN offered, compared to its pricing plan.

I wouldn’t beat around the bush and get direct to the point, first let’s filter out who and why needs a VPN, and then we can proceed with the BulletVPN review.

BulletVPN Review: Who needs a VPN?

Anyone who browses the internet, period! If you browse the Internet, there are footprints you do not wish linked back to you, and even if you’re totally on the “up and up” activities, you wouldn’t want govt. agencies and curious nerds peeking through your windows (or browser history in this case), would you?

Wish to remain anonymous on the Internet? Value your privacy and like to keep your real-life identity apart from your digital one? Well, you’re in a desperate need of a VPN.

Another breed of humans who need a VPN are those who try to access the “not so celebrated” parts of the Internet, such as the Deep web. They’re illegal, but not always as harmful as the media projects them to be, so I understand if your curiosity gets the better of you.

Or hey, if you’re just a regular guy who wishes to access Netflix, Youtube, or any other site which might be banned at your school, home, state, or country, a VPN comes to your rescue there as well.

Or do you use a lot of Public Wi-Fi? Guess what, they’re vulnerable to a dozen kind of attacks, and you wouldn’t want some random dude gaining access to your system now, would you? Yeah you’d need a VPN to make that happen!

That basically gives you an idea of who needs a VPN. Everyone! Isn’t that so?

Now from among the hundreds of VPNs why did we handpick BulletVPN specifically? This BulletVPN review will give you the answer, once you go through the features it has packed within itself.

Which Operating Systems does BulletVPN Support?

All the major operating systems out there in the world are supported by the VPN, including:

So regardless of which device you’re using, chances are BulletVPN is a right fit already.

What good is a VPN which doesn’t offer you more than enough countries to choose from, right? BulletVPN knows that as well, so it brought forward a list of 25+ available countries!

Some of them include: 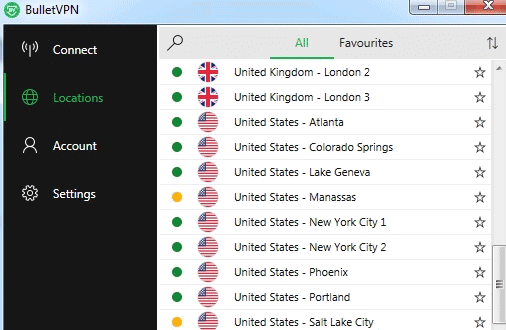 And as I said, this is just around 25% of the list! Now just offering “countries” wasn’t enough, so BulletVPN also included “more than one servers” in most countries, to ensure best possible speed regardless of traffic or number of connections to that country.

Half of the VPNs I’ve been with, like to impose restrictions on the speed limit. BulletVPN doesn’t. This is one of those “get this BulletVPN review done” reasons I was talking about.

I believe if I pay for a service, I should get to use it to the extent of my own will, and that’s exactly what BulletVPN believes in as well.

So doesn’t matter how much you browse or download using the VPN, your speed won’t be throttled.

That’s not where the VPN stops, because it again goes on to provide us with “Unmetered Bandwidth”, so doesn’t matter how many MBs, GBs, of TBs of data you use with BulletVPN, it won’t mind.

This is a personal experience I recorded with BulletVPN. If you’ve been an avid VPN user, you’d have noticed how most VPNs result in MAJOR speed loss.

While to the contrary, with BulletVPN I was surprised to find that there is almost no speed loss. Infact so much so that I actually went on Ookla to check and verify it, and here’s what I found.

My general Internet speed without a VPN is around 3.10Mbs , so as you can well calculate, the speed loss isn’t significant, at all. And for all that privacy and anonymity, I’m more than happy to adjust with even a slower connection!

The reason for this is that BulletVPN hosts all its major servers in Tier-1 countries, so obviously speed isn’t an issue.

The major green-light which finally helped me decide that I was going to get this BulletVPN review done was the fact that, BulletVPN doesn’t keep any logs!

Again, most “industry-leading” VPNs do keep a log and aren’t 100% anonymous. So that directly kills the whole purpose of using a VPN, doesn’t it?

So when I found out that BulletVPN has a completely “no logs policy”, I just knew I found my match. Considering how it keeps no logs, there isn’t any secret or report to be shared with the authorities even if needs do arise.

So yeah, you’re as anonymous as you can be.

People generally pay $10-15 just for the “Smart DNS” service. Well if you’re one of them, you need to cancel your subscriptions right about now!

Because BulletVPN prides itself on offering Free Smart DNS included along with your VPN plans.

SmartDNS is what let’s you stream restricted videos and content even from “Blocked” websites which might not be available in your region by default. So you can access Netflix, Hulu, BBC or basically any other website with ease in just a couple clicks without paying anything extra.

As if offering Unlimited Speed and Bandwidth wasn’t enough, BulletVPN lets me add another feather to the cap of this BulletVPN review by letting me scribble this section down.

You can switch servers (countries and individual IPs) as many times as you want with BulletVPN, there’s no limit of any kind.

Why pay thrice when you can pay once, that’s what BulletVPN believes in. So with any plan of the VPN, you can connect as many as 3 different devices, again no extra charges required.

The three devices can be a laptop, mobile and a tablet, or 3 mobiles, or 2 cell phones and  1 laptop or basically anything else. As long as they are three individual devices, feel free to use the same BulletVPN account on all of them.

BulletVPN supports as many as 5 different security protocols for different needs. You can choose from:

Now honestly, how many VPNs have you crossed paths with offering this many connection protocols? Even the so-called “Best” VPNs give up at 3, or 4 protocols at a maximum.

No, just because BulletVPN is feature-rich, doesn’t mean it’ll set you back on your mortgage. Infact, it seems to be cheaper than what most of us pay for our monthly makeup or beverages.

It has three plans, and they all hold the exact same features. The only price-difference is because of the “Billing cycle”.

Well I believe paying $7.50 for being safe, secure, and anonymous in this digital era is a steal-deal.

So wrapping up this BulletVPN review, all I can say is, there doesn’t seem to be a feature which I wanted to be with a VPN but the platform is void of.

No logs Policy, 25+ countries, Free Smart DNS, Unlimited Speed, Bandwidth and Switches and all the other features are more than enough considering the pricing plans.

So I’d definitely vote for BulletVPN, but I’d also like to get your thoughts on the platform, so do give it a try. Worry not, their 30-day moneyback guarantee makes sure you don’t lose anything lest you aren’t happy (which is right next to impossible if you’re even remotely anyone with my interests!)