Fraud Blocker review 2022: If you run ads, this piece is for you. I’m confident you’ve often seen your ad account getting emptied, without any actual sales. Fraud Blocker may be a potential solution to the problem.

It claims to be able to detect fraud clicks and block them, on automation. Hey, I don’t trust claims and you shouldn’t either. Hence, go through this Fraud Blocker review, and then give it a try (it’s free for 30-days, with all features).

Let’s start with the basics then?

What is Fraud Blocker?

It prevents fraud clicks on ads and saves advertisers’ money. That’s the simplest and shortest explanation for Fraud Blocker.

Did you know that over 36% of all clicks on ads were found to be fraudulent as of 2020?

Advertisers spend money for ads, unfortunately, publishers often employ artificial and scam setups to get clicks on these ads.

Because these clicks aren’t organic or from unique individuals, they never convert. This makes money for the publisher but is of no use to you as an advertiser.

So, Fraud Blocker simply identifies and blocks such clicks. This makes sure you do not waste your money, and the clicks you get have higher chances of conversion.

The tool is 100% automated. You set it up once and don’t ever have to touch it again if you don’t want to!

As far as I’ve used Fraud Blocker, these are the primary features I’m most impressed with:

Compatible with all websites

Doesn’t matter what language/CMS/type of website you’ve got, Fraud Blocker works with all of them.

To list just a few of them, Fraud Blocker is compatible with:

In order to install Fraud Blocker, you only need to know how to copy & paste.

It gives you the installation code on its “Setup” page.

All you’ve to do is, copy the code, and paste it onto your site. I’m sure most of you know how to do that. Just in case you don’t, it has step-by-step guides for each platform/CMS.

Then, to connect Fraud Blocker to your Google Ad account, you simply click on the “Sign in with Google” button. You simply enter your Google credentials and you’re set.

So in your dashboard, you see this “Fraud Score” option. You click on it and it gives you your fraud score (along with a few other metrics). 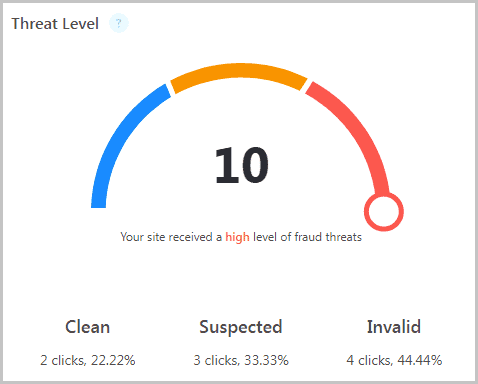 It very clearly shows the number of:

(This also proved to me that the tool isn’t just a gimmick and does actually work).

This basically just tells you what type of click Fraud Blocker has blocked, and how many.

Pretty easy to understand, isn’t it? You don’t really have to do anything, except read the data and count the cash you saved maybe?

I said I love Fraud Blocker’s customization, didn’t I? Let me explain why.

So, Fraud Blocker lets me choose which fraud-triggers to block and which to allow.

This comes in handy when you’re running specific ads. E.g. In certain cases, I’m okay allowing VPN-clicks, or even clicks from same devices. Wouldn’t you allow VPN-clicks if you knew your target audience probably is using a VPN anyway?

So, using Fraud Blocker, I can enable/disable the following triggers:

I’m impressed not because of the control I get. But because how simple and easy it is to set up. Just a single click in most cases, easy, isn’t it?

If you run ads, you probably have a team. Maybe you’re an agency and you offer services to clients?

Fraud Blocker lets you add team-members to your accounts. Not just that, you can even assign the amount of control you’d like them to have. 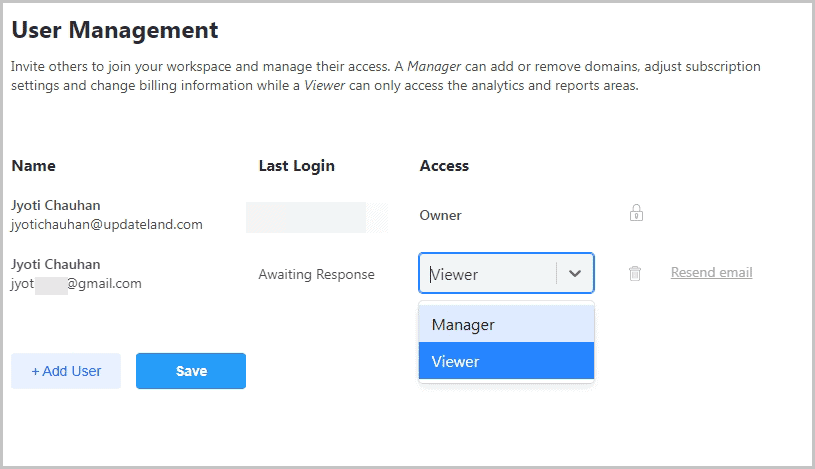 I hate excel sheets or complex data, I’m sure you do too.

Fraud Blocker makes understanding its data extremely simple. If you click on its “reports” link, this is what you should see:

This page will show you IP addresses, and their status. It also includes a “fraud type” column. For any blocked IPs, this column will tell you the reason why the IP was blocked. Even the source of the IP is displayed.

Again, this is all automated. However, in case you think an IP has been blocked by mistake, you can unblock it in a single click.

Moreover, Fraud Blocker is also capable of sending real-time email alerts in case you’d like more “in the loop” management.

This is one of my favourite features.

It basically scans your clicks using its internal network. If any of your IPs have been blocked/detected as being abusive even for some other website, it’s automatically blocked for your website as well.

Do note that this feature isn’t available on the cheapest plan.

Compatible with most ad networks/providers

Almost all the data Fraud Blocker gives you can be exported.

Fraud Blocker is integrated with your Google Ads account for automation and faster fraud prevention.

However, you can also manually export & then import the malicious IPs onto your other ad account(s) if you wish to.

This makes sure that you can block fraud clicks on most ad networks as long as they allow importing your IP address list.

Later this year, they may also integrate Bing, Facebook, Yahoo and other ad-networks so malicious IPs can be blocked in real-time just like Google Ads.

If you run ads, you clearly have some experience with websites and other similar apps. However, even if you’re completely new and this is your first ad ever, you can still understand Fraud Blocker without much confusion.

Without any additional clicks or pagechanges, you get instant access to:

That’s all the data you need, isn’t it?

On the same page, if you scroll down, it gives you additional details. These include:

Hey, this data doesn’t need you to be a rocket-scientist, does it?

The technicalities- What and how it’s detected.

A question you should be asking by now on this Fraud Blocker review is- What types of clicks can Fraud Blocker detect? How does it detect/flag those clicks?

It can detect pretty much everything. The list includes:

Now  for the “how”. Fraud Blocker employs a number of triggers to detect these clicks.

Some of these are:

Before I sign off this Fraud Blocker review, let’s see how it affects your pocket?

Well, it doesn’t cost anything, for the first 30-days at least. Yes, there’s a 30-day free trial you can opt for. You’re only charged if you do not cancel within the first 30 days. Neat, eh?

I love tools that offer a free trial. This gives you the liberty of trying it out personally without trusting these reviews blindly.

As for the paid plans, 2 of those exist:

*Do note that these are annual plans. You can pay monthly if you want to, but then you’d be giving up the 20% discount you get on these annual plans.

Finally, let’s talk about its support. Do you get help when you need it?

Well, it does have 3 different modes of communication to start with.

So yes. Although I never had to use their support personally (the app is straight-forward, isn’t it?), I believe getting help would be easy.

Hey, you’ve still got a few questions. Let me try and answer a few of them?

#1. Can you cancel/upgrade/downgrade a plan at any time?

Absolutely. With Fraud Blocker, there are no commitments. You only pay for your current plan (monthly/yearly). You can choose to cancel at any time.

#2. Does Fraud Blocker work for all ad-types?

Yes. Because it’s directly integrated to Google Ads, any ads you’re running via Google are monitored and malicious IPs blocked automatically. If you’re not using Google, you can still export the IP list Fraud Blocker gives you and import it to your other ad provider.

#3. Is Fraud Blocker secure and trustworthy?

Yes. Fraud Blocker only uses the Google API to monitor your ads. It does not make changes to your ad settings. Similarly, your campaigns and ad creatives are not touched either.

#4. Does Fraud Blocker have a mobile app?

So, is Fraud Blocker worth it?

In my personal opinion, Y-E-S. It’s extremely easy to install, even easier to use and is almost fully automated.  I don’t need to touch it ever again once I’ve installed it.  In terms of the pricing, it’s almost free.

Is it the best fraud-click blocker though? Probably not.  I’m sure there are better alternatives available. However, Fraud Blocker’s low price point and strong feature set certainly make it worth checking out.

So, in a nutshell, I’d say if you use ads give Fraud Blocker a try. I’m sure its 30-day trial will give you an idea if it has any use for you.