Heard of this free forever, 0-cost, P2P VPN maybe? Is Hola VPN fast? Is it secure? Can it unblock websites? Is it worth your time?

If those questions are even remotely similar to what you’re thinking, this Hola VPN review is exactly for you.

Hola VPN is one of the most unique VPNs in the industry. In fact, it’s one of a kind. Why so? That’s what this review is for, right? Let’s get you the details then?

An overview, before a review (that rhyme wasn’t planned, trust me) should help you understand the VPN better, right?

Basically, if you need a 100% free VPN, you’ll get exactly that in the next few minutes.

Hola VPN was founded by Ofer Vilenski and Derry Shribman out of Israel in 2007. Its existence in the industry for over 13 years is a major trust-booster by itself, isn’t it?

If I’m being honest, Israel isn’t my favourite location when it comes to anonymity. But, as long as it’s out of the U.S/E.U or the Five-Eye jurisdiction, I’m okay with it.

Hola is a 100% free VPN. Obviously, there’s a premium version which offers more features. However, it has a fully functional, forever free version as well.

How can it offer a forever free version? Because, it’s a P2P, node-connected VPN. Never heard of that? I’m explaining in the next section.

For now, know that if you wish to unblock websites without paying a single penny, Hola got your back! (Pay attention, I said “unblock websites”. That’s because the free version doesn’t secure or encrypt your connection.)

Let me first explain what “Peer-to-Peer” actually is? It’s pretty unique, new and impressive to be honest.

So, the VPN doesn’t use conventional data centres for its network routing. Rather, it uses “other people’s computers, including yours” for facilitating its connections. These other computers are called “nodes”, much like Tor.

When using the VPN,  you’ll be accessing the internet using other people’s IP addresses. These are real people, with real homes and computers. (Hence, their IP addresses can almost always bypass any firewall, even Netflix’s. Datacenter IPs are often detected).

Similarly, when other Hola VPN users browse the internet, some of those users may be routed through your computer. (You can opt-out of being a peer, for free.)

This doesn’t mean any of the users get any “control” of the other users’ device. It’s simply the network which is routed via these computers.

This is why Hola VPN calls itself an “IP Exchange Network”. You use someone else’s IP, someone else uses yours.

Because there are not many datacenters involved (the company still has its own servers), the operational costs are minimum and hence Hola can be free.

This is another aspect of Hola’s P2P VPN. Each peer contributes his/her bandwidth to the resource pool for other users.

Hola says it uses less than 100MB bandwidth from desktop users, and less than 3MB from mobile users.

Hey, you’re getting free VPN, for life! The amount of bandwidth seems pretty acceptable, doesn’t it?

Also, any system is only used as a node when it’s “idle”. By Hola’s definition,  if a user is not active for 1 minute, or if the keyboard/mouse isn’t used for a few minutes the system may be used as a node.

This makes sure that our systems aren’t bottlenecked for resources when active. Also, this is like every user, helping every other user using Hola VPN stay anonymous.

Not many of you reading this Hola VPN review are happy with the P2P sharing, and that’s expected.

Fortunately, there are a few ways using which you don’t have to be a peer. Meaning, neither is your system used, nor resources.

The first option is, obviously, paying. If you go for the Hola premium plans, you’re left alone.

I’m impressed. The company isn’t forcing me to pay for opting out, and the extension will let me use the VPN with ease, win-win, right?

The VPN mentions multiple times on the website that it doesn’t keep logs.

Probably one of the most desirable features, isn’t it? The company doesn’t know who you are, which IP address you’re using, or what you’re doing on the web.

Do note that even if you’re connected via a peer, the peer has absolutely no idea of your identity, or your activities.

Hence, if you thought this resembles how torrents work, you’re probably wrong. Torrenting exposes your IP address, Hola VPN peers on the other hand have absolutely no  such data.

Now, let’s move to the simpler features? Alike any other VPN, Hola VPN too has a “country-list”.

I actually counted. A total of over 40 countries are available. All the major (and minor) countries can be connected to.

Despite being P2P, the VPN isn’t without its own servers. It has an arsenal of over 1500 servers.

In fact, the VPN only uses P2P IPs when its datacenter IPs aren’t suitable, or capable of a proper connection.

So, changing virtual location wouldn’t be a problem with Hola, period.

A major metric to check with VPN services is the number of connections they allow. As for Hola VPN, it allows 10  simultaneous connections by default. Obviously, no extra payment is required for these extra devices.

Based on my experience with VPNs, almost no VPN offers 10+ connections for a single account.

But, that’s not all. Hola VPN has an extended plan, called the “Hola Ultra”. It offers 10 additional devices, on top of the 10 devices you already have. However, this requires additional payment.

A VPN helps us mask our IP addresses, sure. But, another primary purpose they serve is encrypting our connections. This is done by using encryption protocols.

The stronger encryption a VPN offers, the better it is (obviously). As for Hola VPN, it didn’t impress me here, but, it’s still acceptable to some extent.

So, HolaVPN offers the following protocols:

Now, IKEv2 is one of the most secure protocols. It’s also best for those who switch connections frequently. IKEV handles changes in connections better than any other protocol.

PPTP is one of the least secure protocols. But, it’s also one of the most compatible ones. Hence, Hola VPN makes sure you can use the VPN regardless of your system specs.

L2TP is a double-encryption algorithm. Extremely secure, but, also a bit slower (for obvious reasons.)

All in all, even if you’re not into the technicalities, just know that Hola VPN is pretty secure.

On top of that, it’s one of the few VPNs which let the users choose their encryption algorithm. You can choose from a number of protocols as shown in the screenshot below: 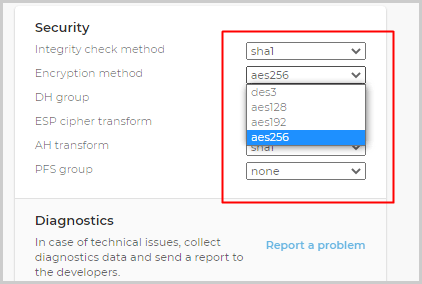 What device do you need to use Hola VPN? In one word, I’d say- “any”. Well, Hola VPN is compatible with almost everything. The screenshot below should explain its compatibility better:

So, regardless of which device you’re on, you can use Hola.

Do note that you don’t even have to download an app to use Hola. Using the browser extensions is simpler, and, it makes sure your resources aren’t used as a “peer”.

Unblock Netflix (and, everything else)

Not many VPNs are capable of unblocking Netflix. Hola VPN is. That’s primarily because it uses “residential IPs” from other peers.

These IPs don’t need to “bypass” I.P-detection. They’re legally allowed to access those services because they belong to real people, living in those regions.

This also is a reason Hola VPN may be able to access the Netflix library for almost any region. Hence, while most other VPNs have a specific list of Netflix-compatible IPs, Hola VPN doesn’t.

It lets me  unblock Netflix even without the VPN-client. Its browser-extension is all I need! It actually works, and, here’s proof:

Once you login to your free Hola account, you’d see a list of the most popular websites for your country.

You can access any of those websites using Hola VPN. This proves that Hola doesn’t just unblock Netflix, but also almost everything else.

For some reason, a few Hola VPN reviews out there claim it reduces speed. That could totally be true for them.

However, in my personal experience, I don’t notice any speed reduction with the VPN.  As I’ve already mentioned, it lets me stream Netflix, without buffer.

Here’s a speed test I did. You can verify the screenshot’s authenticity here.

Bottomline? My standard (non-VPN) connection is around 6-7Mbps. So, a 4.62Mbps speed with the VPN connected to the U.S is pretty acceptable.

If you go through my list of the best VPN companies on the planet, you’ll see this is exactly the speed I get even with the best paid VPNs out there.

The only aspect left on this Hola VPN review is probably the pricing, right?

Obviously, there’s the “forever free” plan as discussed earlier. However, the paid plan has its benefits.

Unfortunately, it doesn’t seem to accept Cryptocurrency payments. Payments can be made via Credit cards, PayPal, or a number of online wallets.

There’s even a 30-day moneyback refund policy. So, you don’t really have to take their, or my word for it. Go give the VPN a try, if it doesn’t work for you, you get a refund, simple.

Let’s sum its best and worst aspects then?

Obviously, you use a VPN to stay anonymous, right? I get it, the whole P2P, community-sharing thing may hurt a few of you.

But, on the bright side, the VPN is able to offer 100% free VPN (that actually works). And, you always have the option to opt-out, even if you’re a free user.

The other metrics such as 10 connections, the encryption, guaranteed Netflix unblocking, no log policy, and everything else fit in perfect as well, don’t they?

All in all, it  has its strengths, and its weaknesses, like everything else on the planet. Is it the best VPN? Probably not. Is it a VPN you should try? Definitely. And with that, I sign off this Hola VPN review.