You’re here for the Ivacy VPN review, aren’t you? Need to know how anonymous or secure Ivacy is? Does it slow your connection down? Can it be used to unblock Netflix? What other features does Ivacy VPN offer?

Those, and many other questions are what I’ll be answering (with proof) throughout this Ivacy VPN review.

Wait a second. Before we start, here’s an overview of the VPN. This will help you understand the VPN much better:

The list above does get you an idea of what to expect, right? Let’s get started with this Ivacy VPN review then?

(Do you believe this review could be here any other way?)

This, without doubt, is the most important aspect of any VPN.

I’d not even consider a VPN which doesn’t have a no log policy. So, before you even start on this Ivacy VPN review, know that it doesn’t store logs.

The “no log” policy on Ivacy clearly mentions that no logs are kept. This means, the VPN doesn’t:

Basically, nothing that can be used to identify an individual is kept. This means, even when the govt. or agencies require Ivacy to share data, they get nothing.

Where are Ivacy headquarters?

Ivacy operates out of Singapore. Why this matters? Well, Singapore isn’t a member of the “Five-Eye” alliance. The Five-Eye countries include USA, UK, Canada, Australia, and New Zealand.

These countries cooperate with each other, share data, and at times may even conduct active field operations for the other members.

In simpler words, never go with VPNs based out of these countries. Especially if you seek to use the VPN primarily for “anonymity”.

Singapore is a pretty good choice because it does have privacy-friendly laws. Off to a good start so far, right?

How good/bad is the user interface on Ivacy VPN?

What’s the first and foremost aspect you notice when you use a new application? The user-interface, obviously. 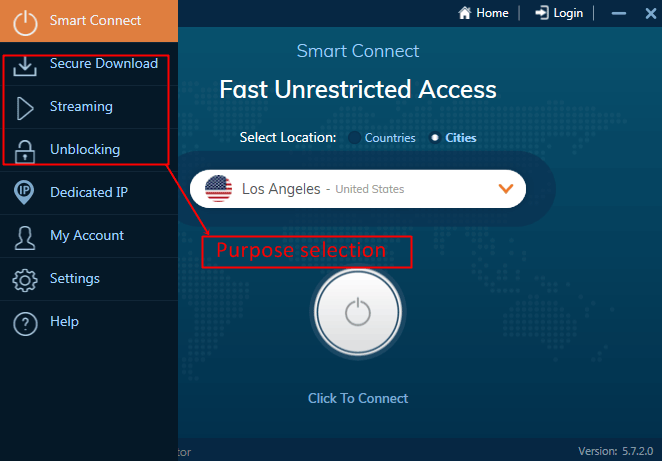 It’s pretty modern, clean, and easy to understand, isn’t it? Shortest route to a secure, encrypted, masked VPN connection? You simply click on that big circular button at the centre.

The left-sidebar is what you use to navigate to the other sections of the VPN.

Its in-built purpose selector is interesting. Suppose, you’ve never used a VPN before. You’ve no idea which server you should, or shouldn’t connect to. Or, which protocol suits you best.

You simply select a purpose from the left-sidebar. Do you wish to stream? Unblock websites? Or, download content anonymously?

You make that selection, and the VPN auto-suggests the best configurations and countries for you.

What are the available countries on Ivacy VPN?

Any VPN will let you choose from a number of countries. But, “how many” of these countries do these VPNs offer? That matters, doesn’t it?

Well, Ivacy offers one of the most extensive list of countries. Over 100 different country-options are available. It has over 1,000 servers to support all of these different locations.

Also, for quite a few of these countries multiple “cities” are offered. 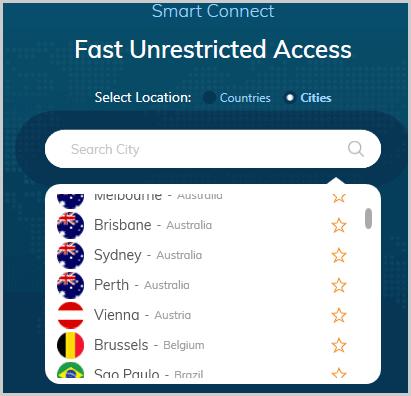 So, you can pinpoint exactly the location you wish to use the internet from. Let’s rate it a 5/5 purely as far as “country” options go?

Which connection protocols does Ivacy offer?

The connection protocols define how well-encrypted your connection will be. They also define the speed, and compatibility of your VPN connection.

The technicalities are quite complex. But, in order to make this Ivacy review easily understandable, I’ll simplify things for you.

Now, TCP and UDP are basically two sides of the same coin. TCP is more reliable, but slower. UDP is faster, but less reliable.

IKEV is best for those who mostly will use the VPN on cell phones. That’s because IKEV is capable of keeping the connection alive even when there’s frequent network change.

L2TP doesn’t offer any encryption of its own. Rather, it’s generally used with IPsec. Now, this results in a stronger  but slower connection.

On top of all this, the VPN uses military-grade 256-bit  encryption. It’s supposedly one of the strongest encryption algorithms available on the planet today.

In a nutshell? Ivacy has something for everyone.

Imagine you’re connected to a VPN. Generally, you can’t login to your bank account, or at times even your social media accounts. This is because the website/portal doesn’t recognize your IP address, right?

Now, with most other VPNs, you’d have to turn the VPN off, login to your portal, and then re-connect to the VPN.

With Ivacy, that isn’t a problem. The Split Tunnelling feature lets you use the VPN selectively.

And, this isn’t limited to web browsers. You can also choose specific apps (e.g. multiplayer games) which will, or won’t use the VPN.

Because we’re talking of Split Tunnelling, this is another feature that deserves a mention.

So, you can get yourself a dedicated IP with Ivacy VPN. This will ensure you always have the same IP address when using the VPN.

This lets you “whitelist” the IP address on your portals, such as bank websites. Once done, you’d be able to login to your bank website even when using the VPN.

What is the kill switch feature?

I’ll be honest, this isn’t a feature exclusive to this Ivacy VPN review. Almost all the VPNs out there offer a kill-switch. However, it’s an advanced feature nonetheless.

So, imagine you’re on the dark web, or are browsing simple websites over the VPN. You never know when the VPN connection drops in the background, right?

What if it dropped a few minutes ago, and you’re still browsing? The website, your browser and your ISP now have access to all your activities and actions.

That’s what the kill-switch prevents from happening. So, if your connection drops, the kill switch automatically terminates your internet connection as a whole.

This makes sure that if you’re browsing the internet, you’re connected to the VPN.

How many simultaneous connections can you have with Ivacy VPN?

An average family today has 3 members at the least, right? Privacy and anonymity is equally important for every member, isn’t it?

Now, it’s not practical for you to purchase a VPN subscription for each device. Ivacy understands that. It allows as many as 10 devices to connect to the same account.

Well, yes. You don’t need to pay extra. You can secure your phone, computer, an additional computer and phone, your partner’s devices, your cousins’, and maybe even your neighbours devices. On a single subscription.

Comparatively, this is impressive even by the industry-standards. Most other VPNs offer 6 or less connections.

But, you do care about unlocking Netflix, don’t you? I mean, you’re paying the same as everyone else, but, you’re not getting the full Netflix’s library!

In case you’re new to this, each Netflix country has its own content database. It’s not universal. So, you’re probably missing a lot of Netflix content that’s only available in other countries.

Ivacy VPN may be able to solve that. It can unblock Netflix-libraries from 7 countries. The list includes:

Obviously, we’ve got to verify these claims, right? So, I connected to Ivacy, to the U.S.A servers. And, here’s me streaming “Always”.

It’s a movie exclusively available on Netflix U.S. The screenshot above establishes the fact that Ivacy can indeed unblock Netflix regions.

This is impressive because Netflix has one of the most advanced VPN-detection algorithms.

Most VPNs can’t bypass Netflix to begin with. When they can, the list of Netflix-countries is much shorter than Ivacy’s.

And, it’s not just limited to Netflix! Ivacy can unblock pretty much anything else. It even has “in-built channel selectors”. So, you can choose from Hulu, BBC, ABC, NBC, Fox, 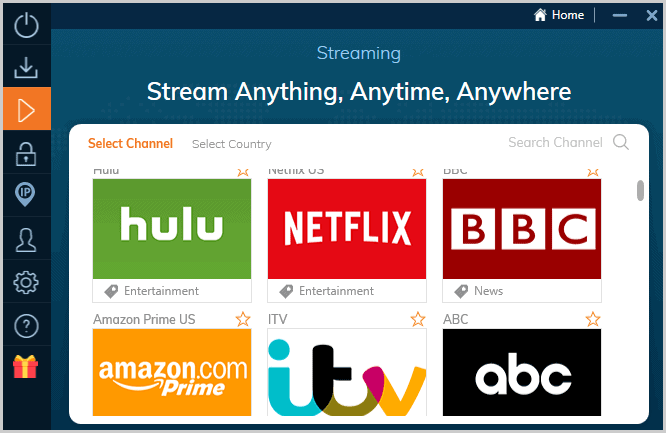 All in all? If you wish to stream unrestricted, Ivacy wouldn’t be a disappointment.

This isn’t a generic section meant just to extend this Ivacy VPN review. Rather, Ivacy truly is a 100% anonymous VPN.

So, the VPN only requires your E-mail ID for signing up. This means you do not have to share your name/address or anything else which can be used to identify you.

Secondly, it accepts payments via Cryptocurrencies. So, you can pay via: 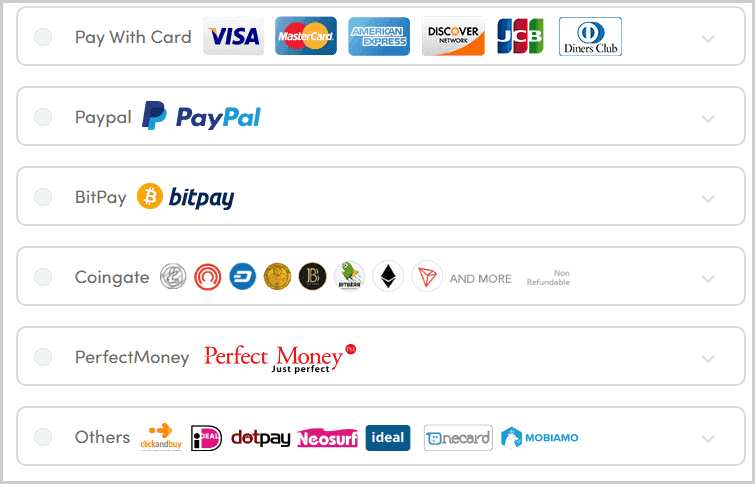 It essentially means, the VPN doesn’t know who you are. Cryptocurrency payments can’t easily be linked to personal identities.

Obviously, you can also make payments using the traditional modes such as:

All in all, you wouldn’t have problem making your payment, without compromising on your privacy on Ivacy.

Which devices can use Ivacy?

Ivacy truly seems like an universal VPN. It can be used on almost everything. The list includes:

So, it doesn’t matter which device you own, you can totally use Ivacy.

Will Ivacy slow my connection down?

No, it won’t. That’s actually one of the primary reasons why I thought of getting this Ivacy review out.

It’s one of the few VPNs which has the least effect on speed. Obviously, every single VPN out there reduces speed to some extent. Hence, those which reduce the least are good choices, right?

I wouldn’t make statements on how fast or slow Ivacy is. Here are the speed test results before and after connecting to Ivacy. 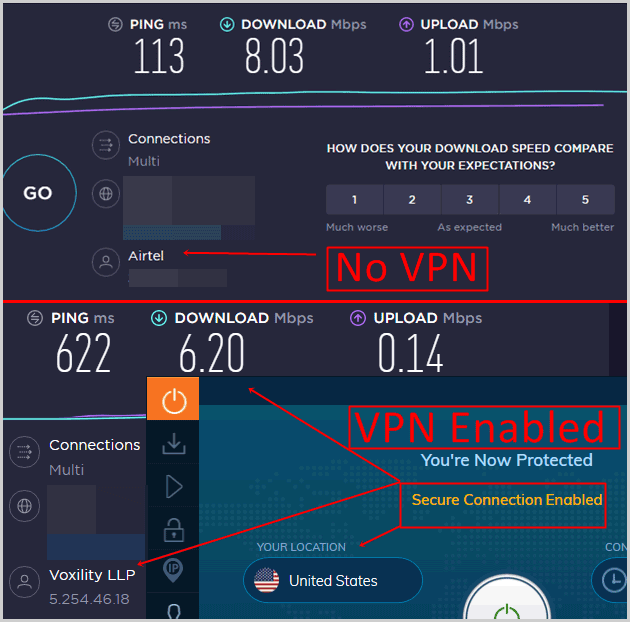 Do note that I didn’t connect to an Indian server. Because, that would naturally be faster for me.

Rather, I connected to a distant U.S server and the results still impressed me.

What is the bandwidth limitation on Ivacy? Does it support P2P?

Ivacy offers unlimited bandwidth. Well yes, you heard that right. No matter how much data is used over the VPN, you never run out of it.

And, it does support P2P as well. Meaning, you can download torrents using its specialized servers. They’ll keep you anonymous and untraceable.

The VPN offers advanced DNS leak protection and IPv6 leak protection. Without the technicalities, this means your IP address will not be leaked no matter what.

Additionally, it has an in-built virus and malware detection abilities for downloaded content (torrents are full of viruses, right?).

Considering all that, It’s safe to assume that Ivacy is one of the best torrenting VPNs on the planet.

How good/bad is Ivacy VPN’s support?

They’ve got a live-chat feature. It’s live, 24X7, and the response-time never exceeds a minute at best.

Moreover, the team actually offers “solutions” and doesn’t just guide you from one link to another.

Obviously they can also be reached via phone and E-mail, but, I’ve always found my solution with the live chat.

In a nutshell, their support totally deserves a 5/5 rating as far as this Ivacy VPN review goes.

How much does Ivacy VPN cost? Is there a free trial?

The $0.99 payment will get you Ivacy for 7 days. It’s basically a trial, but not completely free (to avoid spam I guess?)

Despite being a trial, it offers 100% of Ivacy features, without any limitations.

Obviously other paid plans exist as well. These are priced at:

Note that the features are exactly the same on each of these. It’s just the billing-cycle which makes the difference.

And hey, to top it all up, there’s a 30-day moneyback guarantee. So, let’s say you don’t like the VPN, you still don’t lose a penny.

Let’s sum up everything we’ve discussed so far?

Ivacy VPN review final verdict- Is it the best VPN?

Ivacy VPN without doubt is a great VPN. It offers absolute anonymity, great speeds, secure encryption and other advanced features.

However, it’s not completely without its flaws. But then, no VPN on the planet is perfect.

As long as you need a VPN to stream videos, unblock websites, or to stay anonymous, Ivacy is one of the best VPNs you can get your hands on.

In fact, its 10-device support, and 100+ list of available countries is extremely rare in the industry. And the support? Totally impressive.

« Digital Privacy Tips: A Beginner’s Guide
Hola VPN Review: Is it The Best VPN on Web? »