If you are a Kodi user, you must know some of the below given Kodi keyboard shortcuts. These shortcuts will enhance your Kodi experience to the maximum.

Kodi, formerly known as XBMC, is a free and open source media player application launched in 2002. Ever since its launch, it has been one of the most popular entertainment center software and getting more popular with the time.

Those, who don’t know about Kodi, Let’s have a quick introduction of Kodi.

Kodi is an extremely advanced media player which is integrated with tremendous features. There is barely any media file type, that’s not supported by Kodi. From music to movies, TV shows, photos, podcasts to nearly any digital media can be played on Kodi.

Regardless of the type of device you own, Kodi supports almost any device ranging from Android, Windows, Mac, iOS, Linux and even Raspberry Pi. Besides that, Kodi has a big community of active members who make sure to keep updating Kodi to make it one of the powerful open source media player.

There are so many amazing features of Kodi including beautiful interface, support for 70 languages, a library of free Kodi add-ons, and so forth, that makes Kodi a leading media player. You can even completely change the look and interface of Kodi with the different Kodi skins available.

If you have recently started to use Kodi as your preferred media player, this article is a must read for you. In this article, we have compiled a list of keyboard shortcuts you must know. Let’s go ahead! 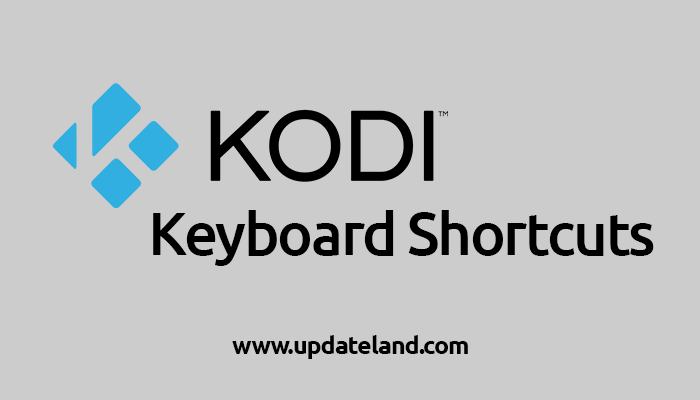 Kodi media center can be controlled through several ways and one such way is Keyboard. So here we go with quite a few Kodi keyboard Shortcuts, that’s being a Kodi user you must learn. So let’s go ahead and check them out!

Since Kodi is a media player, its but obvious that you need to control the audio on it. Below are some of the audio Kodi keyboard shortcuts for controlling the volume.

Shortcut Key: ‘+’ (To increase the Volume)

If you are feeling like increasing the volume of the audio, no need go manual. Just press the + key on your keyboard and the Kodi Volume will be increased.

Shortcut Key: ‘-‘(To decrease the Volume)

If you want to mute the audio, press the key f8 on your keyboard.

One of the best Kodi media center feature that’s lucrative as well as useful is Live TV. If you have planned to go for Kodi live TV, here are some of the shortcuts, that will help you deal better with Kodi

The below list of Kodi keyboard shortcuts is exclusively relevant for live TV.

Besides these shortcuts, you can also utilize the arrow keys Up and Down to browse the channels in upward or downward direction.

Taking up screenshots is a very usual practice for every user. If you are playing Game on Kodi and want to display your score to your friend, you might feel the need to take a screenshot.

Or there might be similar situations when you need to take a screenshot of the current screen of the Kodi media player. In that case, you can use the combination of keys Ctrl+S to capture the Kodi media center screen.

On Pressing the ‘Ctrl+S’ keys, a pop-up window will ask you to select a location for saving the screenshot. Just do that and the screenshot will be saved on your device.

Watching movies on media players is fun. But sometimes we just don’t want to go with the flow of the movies and want to skip some specific part of it. Similarly, sometimes we like a portion or dialogue of the movie so much, that we want to rewind that part.

On contrary to the above shortcut, if you like some portion of the movie, or you missed it for some reason, you can rewind that portion easily. All you need to do is, just press the key R on your keyboard.

Similar to Fast forward shortcut, pressing R once the video will rewind at 2x. Doing it twice rewinds the movie at 4x and so on. However, you can also fast forward or rewind the video by 30 seconds by pressing the right and left arrow key respectively.

Apart from listing to music and watching movies, the most used feature of Kodi is photo viewer. If you also use Kodi as your preferred photo viewer, the below Kodi keyboard shortcuts can be useful to you.

The set of numerical keys from 1-9 is Kodi keyboard shortcuts for the different level of zooming.

Pressing the ‘.’ key helps you scroll to the next image.

Using the keys 1-9 helps you zoom the image in different levels, but if you want to know yet another Kodi shortcut for Zooming, try out this one. Just press the ‘+’ key while the photo is opened, you will see the image zooming in.

Just opposite to the Zoom in, you can Zoom out the image using the – key.

In order to rotate a picture on Kodi, you can simply press the key R and you will get it done.

The last Kodi shortcut for controlling picture on Kodi is T. Pressing the key T, will get you the picture’s EXIF info.

Like several other shortcuts, Kodi also offers a shortcut to adjust the aspect ratio of a video file. If you want to change the resolution of the movie or video playing on Kodi (such as (320 x 240), (1024 x 768) etc), just press the key Z on your keyboard.

If you are playing a movie or a video on Kodi but the audio and video of that movies don’t sync, what do you do then?? Well, you don’t need to compromise with your favorite movie or video, as Kodi has got a Shortcut key to adjust the audio delay.

The Kodi shortcut to adjust the audio delay is A. Just press the key ‘A’ on your keyboard and sync the audio and video with each other.

8). Switch between Fullscreen and Windowed-Mode

If you have been using Kodi, you must have realized that by default Kodi window opens in full-screen mode which prevents users from multitasking. But If you don’t want to stick around just Kodi and want to work simultaneously on the other windows, this Kodi shortcut will turn out to be a life saver for you.

To switch between fullscreen and windowed-mode, you just need to press the backslash key i.e. ‘\’ on your keyboard. Pressing this key will turn the full screen of Kodi into windowed mode and vice versa.

If you have got multiple menus opened on Kodi, pressing the Esc Key helps you a lot in switching quickly between the menus. Instead of going manually, just press the Esc Key to go back to the previous menu or to the main screen.

This Kodi shortcut is pretty useful for quickly shutting down the Kodi window. You simply need to press the S key on your keyboard. Then you will be provided with an option to exit the Kodi with just one click.

Moreover, by using this option you can also directly shut down/hibernate your device. This feature turns out to be really handy at the time of hurry.

If you are willing to play the movie/video, simply press the key P on your keyboard.

And if you want to pause the movie, just press the X key.

And if you want to quickly toggle between the play and pause, you can use the spacebar on your keyboard. There is no much difference in these shortcuts with the other video players. Same keys are used in almost all the media player including VLC, windows media player and even on Youtube.

So if you are an unstable and unsure person when it comes to watching a movie with or without subtitles, you must know this shortcut. To quickly toggle between the subtitles, simply press the key T on your keyboard.

All the above Kodi keyboard shortcuts are applicable for windows. But if you are using Kodi on Mac, we have got some shortcut keys specifically for Mac users. Here are a few basic ones.

So these are some of the Kodi keyboard shortcuts that can enhance your Kodi experience by letting you deal with Kodi more faster and seamlessly.

Kodi is an amazing media center with Outstanding features. It’s feature rich and easy to deal with. But interacting with Kodi through keyboard can be a little slower unless you leverage the shortcuts we have mentioned in this article.

We hope this article will turn out to be of a significant help for the new as well as for the existing Kodi users.

Do tell us in the comment section below that which Kodi keyboard shortcuts you found the most useful. And if there are any other queries, doubts or suggestions, mentioned them too.