It’s often considered something that’s only used to unblock websites. Well, it has a dozen other use-cases especially helpful for digital marketers.

Using a VPN can take your campaigns to another level. Your research gets better, and you also get to borrow your competitors’ strategies.

There are even some direct financial benefits (hint: secret discounts) of using a VPN.

Here’s a visual treat for a brief overview:

Did you know that Google shows different search results based on your location?

The most basic use of this is to get “local” data. What’s your rank in a foreign country? What’s the rank of your competitors in those countries? Without this, you may rank #1 in your country and still may not get many hits. That’s because you aren’t ranking #1 in your target country!

Why should you care about local SEO? Over 80% of users are using local SEO searches. You wouldn’t like losing those visitors now, would you?

Ads are influenced by a user’s location a lot more than organic results.

Using a VPN, you can spy on your competitors’ ads in different countries. You get the exact ad-creative they’re using in those specific countries.

Let’s get you a real-life example?

If I search for a keyword, for example, “NordVPN review on the internet” from my country, this is what I get: 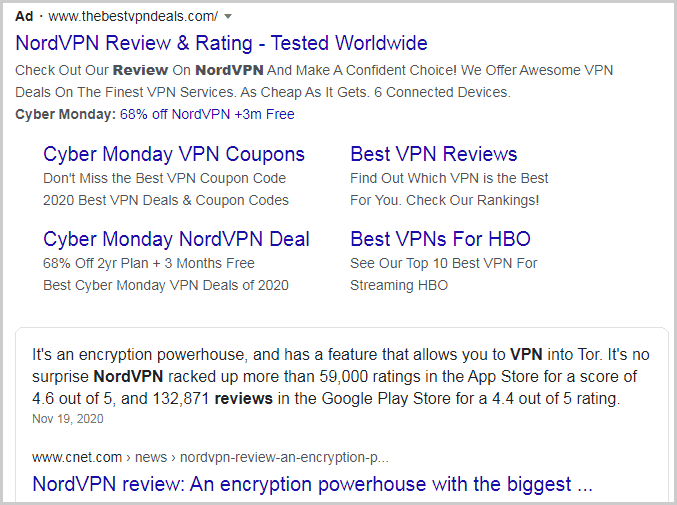 However, if I use a VPN, change my location to the United States, the results change. Now, for the same keyword, Google shows me: 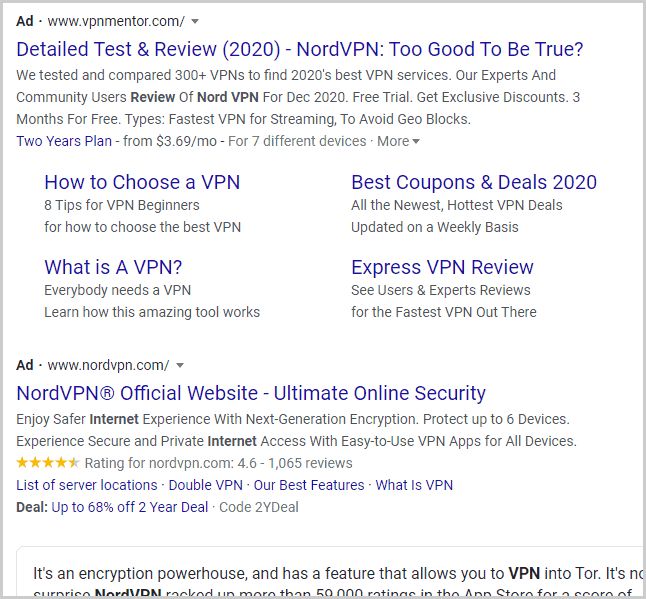 The copywriting, banners, the sentiment that’s being targeted, and everything else also changes as soon as the target audience is altered. You get access to all that.

And, you don’t have to be limited to Google or just traditional search engines. That also works for Youtube Ads, social media ads, and ads on other websites.

So, you get a first-hand idea of what’s working for your competitors in those countries and can make changes accordingly to your ad campaign.

There also are dedicated tools to help you with ad-spying. You can read my Anstrex vs. Adplexity guide to understand which of these two industry leaders is the better ad-spy.

3. Build backlinks without being blocked

What’s one of the most crucial aspects of SEO? Backlinks. What’s the easiest, most common way most SEOs try and acquire links? Comments.

However, it isn’t 2010 anymore. You probably have been blocked often by websites because you spammed them with comments. There are other “block-scenarios” you may have gone through.

The point is, almost any restrictions on the internet can be cleared with a VPN. You can be blocked and still comment as many times as you want simply by changing your IP address using a VPN. Obviously, that’s not ethical. It’s not even as useful for SEO as it was a decade back.

There are certain websites which are geo-specific. Meaning, they’re only available to people from specific countries.

I’m not talking about just “blogs”. There are e-commerce websites, SaaS products, and any other website that your competitors may own. Checking them out is the best way to understand the competition.

With a VPN, you only need a single click to change your location. Then, you can access any website and have a peek at what’s brewing.

One of the perks of being a digital marketer? You aren’t bound to offices and cubicles. Most of you either work from cafes, coworking spaces, or hotel rooms.

Did you know that using public Wi-Fi opens you up to many threats? This includes but isn’t limited to getting your login data intercepted. Meaning, your affiliate accounts, email accounts, client data, personal messaging services, credit card data, and other aspects are at risk.

A VPN protects you against all that by securing your connection. Contrary to popular belief, a VPN doesn’t just change your IP address. It also majorly encrypts the connection as a whole.

How about a bit of a surprise? Did you know your ISP and network operators knowingly reduce your internet speed? There are multiple reasons why they do this. It may be due to congested networks, a financial angle, or any other reason.

Now, being a digital marketer, internet speed is crucial to you. Using a VPN makes sure your ISP can’t control your internet speed.

So, your Skype call won’t start buffering, your files won’t take forever to upload or download, and you will not be frustrated.

For starters, some products are only available to people from specific countries. Using a VPN solves that.

More importantly, most companies run geo-specific promotions. These often depend on a country’s festivals and occasions (for example, Diwali or Holi sales in India).

Using a VPN will allow you to avail these discounts and promotions.

8. Protection from malware/viruses and ads (exclusive to some VPNs)

As a digital marketer, you’re visiting dozens of websites daily, aren’t you? Many of those websites may infect your system with viruses.

The more straightforward problem here is the ads. Websites are spammed to death with ads these days, aren’t they? Every click launches a popup or a window, and that’s frustrating.

NordVPN is one of the few VPNs which have an in-built ad as well as a malware blocker. More importantly, it’s the only VPN that also blocks in-app ads for Android applications!

The point is, a VPN will let you get your work done without risking your security or peace of mind.

You probably don’t know this, but Netflix is not honest with you.

You don’t get 100% of Netflix’s content even though you pay the full price. It has to do with copyright laws, censorship, and other things. So, the Netflix library is geo-specific.

You can use a VPN to unblock Netflix and its entire library. So, you get access to every series/movie that’s available in every country on Netflix (and it’s not illegal.)

How to choose the best VPN services?

You’re on this page, which means you don’t have a VPN yet. So, let me help you choose the best VPN? It’s crucial to do it right.

Picking the wrong VPN is more dangerous than not using any VPN at all. Most of the VPNs claim they do not keep logs. PureVPN and HideMyAss are just two of the VPNs that helped the FBI and other agencies track individuals.

Obviously, I don’t expect you to get involved in anything illegal. You’re a digital marketer, not a dark web shopper, right? But, isn’t it best if you’re entirely untraceable?

In a nutshell, here a few points you must take care of before choosing your VPN:

Summary: Why do digital marketers need a VPN?

Let me sum it all up for a recap? So, a VPN will let you unblock websites, build links without being blocked, prevent you from being hacked, enable you for foreign discounts, let you spy on competitors, and make your entire campaign better.

Most VPNs are very easy to use. In fact, some VPNs don’t even require downloads. You can add them as a browser extension.

As far as pricing goes, you’d be spending less than $3.50/month (NordVPN’s pricing) for all of the benefits above. I believe that it is more than fair pricing.

Do note that this list isn’t all-inclusive. There are a ton of other benefits a VPN offers.

In a nutshell? Get a VPN. Even if you aren’t a digital marketer, you might be spied on, and your data could be sold to third parties if you don’t use a VPN.