This UkeySoft Apple Music converter review will solve your problems if you own an Apple Device, and would like to keep your music even without Apple Music subscription.

All the general Apple Music restrictions (no copying, no sharing, no free streaming) are about to be lifted!

Now, UkeySoft is just one of the many tools available for the job. It’s just that the features seemed extremely rewarding and hence I decided to get this review out.

Do note that it’s a 100% free to try (for 30 days) tool. Hence, regardless of this UkeySoft Apple Music Converter review, you can always make your own decision.

What is UkeySoft Apple Music Converter?

It’s a software for Windows and Mac from UkeySoft. The primary purpose of the tool is to remove DRM from Apple Music and facilitate format conversions.

In other words, you’ll get a normal MP3 file, owned 100% by you once it passes through UkeySoft.

Now, the tool promises to be free, very fast, capable of batch conversions, “no quality-loss” outputs, and seems to offer a lot of control.

How true are those claims? That’s exactly what I’ll be answering in this UkeySoft review. Let’s get started then?

It’s available in multiple languages which include English, Chinese (both simplified and traditional),  French, Spanish, Japanese and Dutch. So yes, it’s for you regardless of where you’re from.

Why should you Remove DRM and Convert Apple Music to MP3, M4A, AAC, AC3, FLAC, etc.

Well, among many other things, it’s possible to remove DRM and convert music from Apple Music to other more favourable formats such as MP3, AC3, FLAC and many others.

Once you remove DRM from your music, you can convert it to any format you want, play the music offline without Apple Music subscription and transfer the files to almost any device out there.

Basically, you unlock and completely own your music after you remove the DRM.

How to Convert Apple Music to MP3 Using UkeySoft on Mac or Windows?

It’s easier said than done (that’s what you’re thinking, aren’t you?) Do you need to be a tech-whiz in order to convert Apple Music for offline listening on other devices?

Not exactly! In fact, it only takes a two clicks (literally) to convert Apple Music to other desirable formats using UkeySoft.

Step 1: Get UkeySoft for Windows or for Mac. It’s free to try so you aren’t losing anything! (You don’t even need to signup or share credit card details!)

Step 2: Simply add the files which you wish to convert from Apple Music to MP3 (or other formats) to your library. Note that you do not need to “download” the files. Simply add them to your iTunes Library. 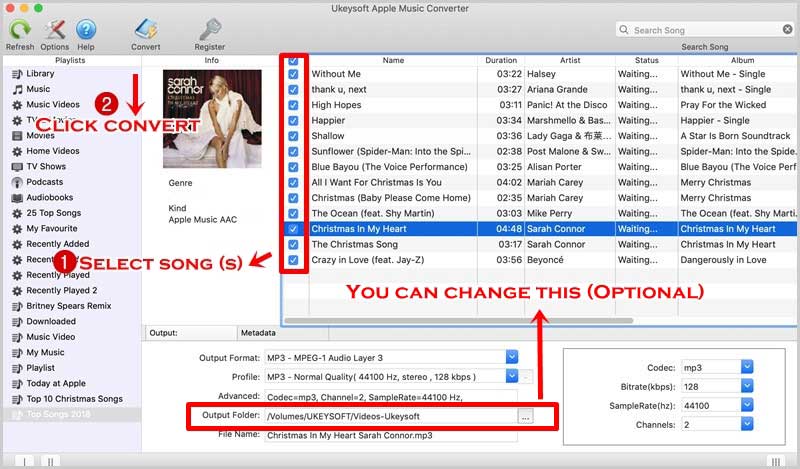 Done! In 2 clicks, you’ve initiated the conversion process. The duration required would depend on the no. of files you’ve selected. Wait a few seconds and then you can access your converted files in the “output folder”.

Batch Convert Apple Music Songs at up to 16X speed

I’ve been with other similar tools as well. A major problem with most is “speed”. It’s tiring and frustrating to wait hours for the conversion to finish up, isn’t it? Hey I related to that.

The “speed” is actually one of the primary reasons which got me scribbling this UkeySoft review down.

So, for starters, as you may have deduced from the screenshot above, it allows “batch conversion”. Meaning, you can select multiple files for conversion at once. You do not need to convert files one after another.

But, on top of that, there’s a more technical edge UkeySoft holds over its rivals. It claims being capable of converting files 16x faster than most of its competitors.

In fact, we get to control the speed manually. You can select the speed at which you wish the conversion to proceed.  Depending on many factors, the speed may affect quality. If that happens, I’ve generally found that reducing the speed restores the quality.

Also, on Mac 10.13 High Sierra or later versions, the speed is stuck at 1x for some reason I don’t quite understand. However, as long as you’re on an older OS or Windows, the 16x speed is all there.

Do note that the 16x is based on UkeySoft’s default 1x (X 16) speed. Meaning, it may not be 16x faster than every other similar tool on the planet.

UkeySoft Apple Music Converter is a 3-in one converter and DRM-remover. Meaning, you aren’t just limited to unlocking your Apple Music files. You can instead also use UkeySoft to remove DRM and convert files from your:

Regardless of which format your Audiobooks are in, UkeySoft can convert everything including M4B, AA, and AAX formats. Similar liberty is seen with iTunes conversions as well.

Yes, it totally can. In fact, it does that by default.

Converting a file and then receiving an output titled “convert-412-312332.mp3” hurts, and I’ve been though that. Especially when batch converting, it’s important the metadata stays intact, I’m sure you agree, don’t you?

Fortunately, it does with UkeySoft. It doesn’t mess with details such as the title of the song, artist’s name, album name or basically anything else.

The same holds true for Audiobook conversions as well. Details of the original file (e.g. chapter names) are retained.

So, yes, you wouldn’t be left hanging with a hundred random new files once you’re done converting. It only changes the “format”, nothing else.

Does UkeySoft reduce quality after conversion?

This is another major green light which pushed me to get this UkeySoft review out. Again, many other similar tools do exist but they cost “quality”.

Doesn’t matter what file you’re converting, a degradation in quality is generally pretty common, isn’t it?

That’s one problem you  wouldn’t face with UkeySoft. It promises “100% lossless quality”. Well, every other tool does so I didn’t quite believe it, at first.

“However, once you try UkeySoft you’d never go back to other options at least as far as quality-preservation goes. “

Can I control output parameters?

You totally can. That’s another one of the reasons which makes UkeySoft an apt choice. It puts the control in your hands.

For starters, you can control the output format (obviously). Then, you can also manually choose the bitrate, no. of channels, sample rate etc. Sure, most of you wouldn’t mess with these, but, if you’re an audiophile you totally “can”.

The tool lets us convert Apple Music to MP3, but, is it expensive? The features sure do seem like it, don’t they?

Well, it isn’t. In fact, it offers a 30-day free trial. That’s quite a generous period, isn’t it? That also means you can verify the statements on this review independently by trying it out.

In case your trial is over, or you just wish to go for the paid plan directly, it costs just $35.95, that’s a one-time payment!

So, comparatively (among its rivals) I’d say UkeySoft is priced pretty rationally. Especially given the fact that it’s not just “gimmick” but actually removes DRM and lets us convert Apple Music to Mp3 and other formats.

Let’s sum the tool up in the briefest possible sentences?

If you simply refer to the “pros and cons” section above, you’d see why it’s a tool worth going with. If not the paid plan, the 30-day free trial sure can’t hurt, can it?

Is it “the best” tool for the job? That may or may not be. I’ve not tested every single software out there, have I?

However, as far as this UkeySoft Apple Music converter review goes, I’d sign off saying it clearly is one of the easiest, fastest and most feature-rich ways of getting DRM-free music files in any format.