In this piece, I’ll tell you which 9anime is real.  I’ll also discuss all the factors which led me to conclude why this is the real 9anime site.

There are hundreds of 9anime URLs out there. Every domain looks almost exactly the same. It sure isn’t easy trying to establish the legitimacy of any one of these.

Hence, I did the legwork for you. Throughout this piece, I’ve also mentioned the reasons which prove that the listed site is actually the 9anime official website.

Which 9anime is real?

As mentioned earlier, there are hundreds of 9anime imposters. Everyone wants to cash-in on the popularity and success of the free anime streaming site.

After going through about 18 different domains (URLs), I finally did find the real 9anime.

Do note that the other 9anime alternatives work too.

It’s just that they either have very slow servers, less content, spammed to death with ads or in some cases may even use your CPU resources without your permission for mining and other tasks!

In contrast to all that, 9anime.vc offers some of the best features that we expect or seek from 9anime.

I’m only discussing this because I was impressed.

For starters, the website is extremely sleek, easy to use and most importantly without any ads!

All you have to do is, search for your anime in the search-box.

If you don’t have a specific requirement, you can use its “Genre” filter. Simply choose if you wish to watch something that’s horror, magic, romance, Yaoi, Yuri, Mecha or anything else.

I love the way it displays episodes as well. On each anime thumbnail, it shows the “episode number”. On top of that, it also shows if the anime is subbed/ dubbed or both. 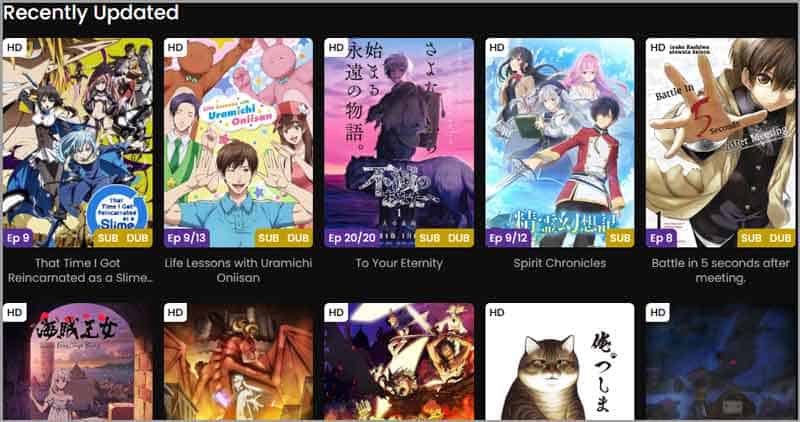 This helps save a lot of time. You don’t have to play every single anime to check for subtitles or language.

As for content database, it has thousands of anime. In fact, it’s probably the largest database I’ve ever seen.

There’s an alphabetic filter. You can choose an alphabet, and all the anime with that alphabet as their initials are shown. For almost every single alphabet that I tried, it showed me a few hundred options to binge on!

Even if we ignore all that, it has one of the most impressive content filters!

You can search for a genre, country of origin, type (ONA/OVA/ TV Series/ Musical etc.), status (ongoing/finished/ not yet aired), and subtitle/dub availability.

I believe that’s pretty impressive and can jhel

Do you need to register to watch 9anime?

On some, or most other 9anime imposters, you may be asked to register. I find that suspicious as the information can easily be sold later for profits.

9anime.vc on the other hand is completely anonymous. It didn’t ask me to register. This was another reason which solidified my trust in it. It’s truly 100% free. You don’t have to pay with your personal info just for watching free anime.

Do note that not all registration-demanding streaming services are bad. But the real 9anime never asks for registration so in this specific case it does matter.

Another thing you’d notice instantly with fake 9anime sites is their desperation for ads.

You’d be seeing banner ads, sidebar ads, pre-roll ads before the video is played and so on.

Fortunately, none of that exists on the real 9anime site. You will not be popping tabs just for clicking randomly on your screen. No ad-banners anywhere exist either.

Even the videos are played instantly. Meaning, you don’t have to watch ads before the video is played.

Is watching videos on 9anime slow?

However, if and when you use the real site to watch anime online, in most cases you wouldn’t see any buffer.

This is simply because the original 9anime site uses quality servers. It’s never overloaded and hence can offer the speed it does.

As for 9anime.vc, it’s literally a 0-buffer platform to watch anime free online.

This is a thin line.

However, contrary to popular opinion, streaming anime online is NOT exactly illegal.

Do note that it’s not legal either. It’s just an act which is against the law.

It’s like having a relationship with a married person. It’s not exactly illegal in most parts of the world, but isn’t legal either.

Do note that downloading or sharing downloaded anime (or any other copyrighted material) is definitely illegal.

Furthermore, personal consumption of such material isn’t exactly illegal. However, putting it up for public display is.

In other words, it’s much safer to stream anime online rather than downloading it.

Moreover, if and when there is some legal action, it’ll primarily be against the website you’re streaming on rather than you personally.

There haven’t been any cases of an individual being prosecuted primarily and solely just for “streaming” content online.

How to increase security when watching anime online?

On anime streaming sites like 9anime.vc there isn’t much you need to worry about. That’s because you aren’t sharing any email/password/name or any other personal info anyway.

However, there are some technical enhancements you can make use of.

For starters, use a VPN when streaming anime or any other content online. This makes sure your activities can’t be traced back to you.

Meaning, even when there’s legal action, no one can prove it was “you” streaming any of that. This is because you’ll be using the VPN’s IP address and not your own for streaming.

I’ll recommend you go with NordVPN. It’s the most secure (independently proven) VPN out there. Other options obviously exist as well.

Are there any limits when using 9anime?

There generally aren’t, not at least on the original 9anime site.

On imposters and other fake sites, there may be a “number of anime you can watch” restriction. After this, I’ve seen sites demand signup or registration.

In some cases, I’ve even seen websites force you to click on ads before the anime can be played or resumed.

On 9anime.vc however, absolutely no restrictions’ exist.  You can watch an unlimited number of anime for free.

Summarizing the question- “Which 9anime is real?”

Again, as mentioned earlier 9anime.vc is the real 9anime site.

Do note that we aren’t encouraging piracy or copyright violations. We aren’t sure if 9anime.vc has or doesn’t have streaming rights for its anime content.

It’s just a legit 9anime website that lets you watch anime free online. We haven’t dug into its licensing rights.

It simply offers a plethora of anime to stream, for free, without ads or signup. I do hope that answered your question about the real 9anime site.

« eSputnik Review: Is this Marketing Automation Software Worth it?
15 Best Mobile Presets Collections To Download For Lightroom »