Who said you can’t teach yourselves coding? Yeah right, no one! There are thousands of blogs on the planet on “coding and developing software/websites”, and we’ve just made the mess a lot simpler by filtering out the best here for you.

These aren’t blogs by someone who loves codes a lot and has started the blog just out of the “love for codes”, in fact most of these are probably older than you (if you’re my age)¸and are run by some of the best minds on the planet who are already internationally acclaimed figures in the industry. 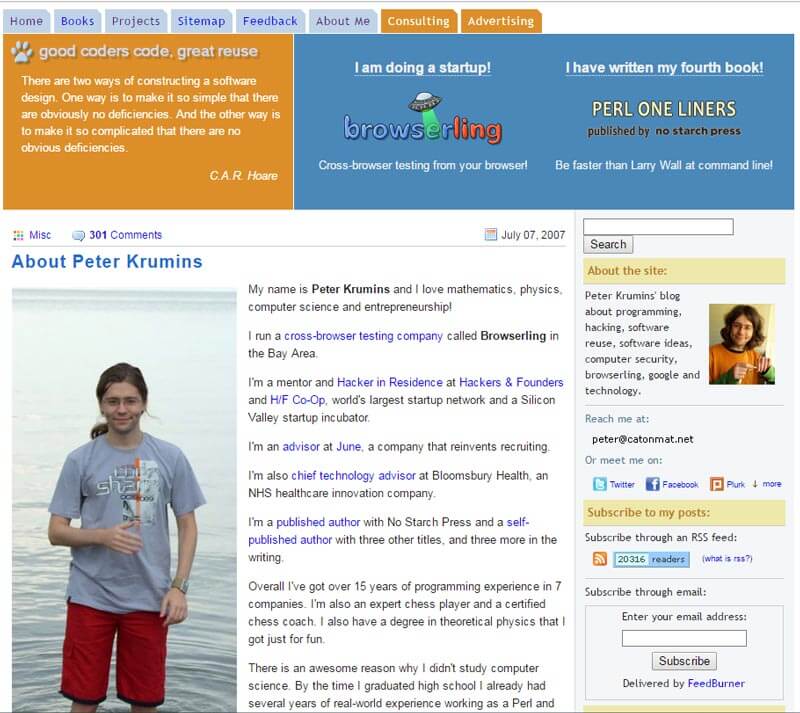 I would be lying if I (personally) didn’t feel and believe that Catonmat is literally “the best developer blog” out there on the planet.

Well but that’s just one man’s opinion. You don’t have to take it as such, not at least without considering the “evidence”.

Why did I say that? That’s a pretty bold statement to make isn’t it? Honestly, there obviously are a hundred, even thousands of developer blogs out there, but I’ve never met someone as spontaneous as Peter  Krumins (the owner), or witnessed a blog with the plethora of information that Catonmat lays out.

In fact one of the primary reasons for me considering this “the best developer blog” is the sheer scope of topics Peter covers over Catonmat.

He has clearly not hesitated or restricted himself to a small circle, and covers almost everything that there is to codes and computers, more than any other developer blog out there, including:-

And that’s just the tip of the iceberg! Each of these above listed topics have 10s of sub-topics of their own, like ASP.net, Node.js, Perl, AWK, Java, vulnerability Testing and what not. (See my point about “Plethora of topics”? Yeah!)

Apart from the contents of the blog, Peter has successfully attempted almost everything that there is to computers.

Currently he is the mentor for World’s largest Startup Network “Hackers in Residence” (if that’s not enough “Okay I trust this guy’s genius” syrup for you, here are some other things Peter has mastered):- 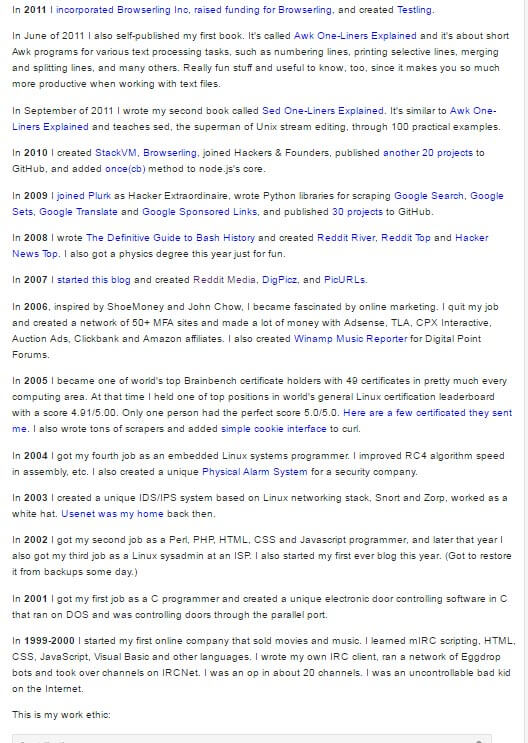 Honestly that covers only around 30% of what he has done, saying anymore would be too much for this piece of article here, so if you’re interested you can clearly check out his “About me” section over at Catonmat, I was just proving a point that Catonmat is run by a guy who is in a serious relationship with computers, period!

So if you need anything that even remotely spells or sounds like “Programming / Developer / Codes / “ Catonmat is the one place you should land. 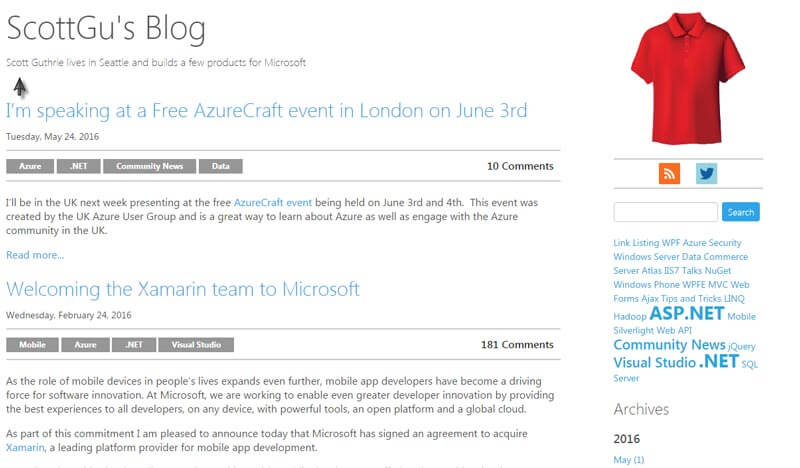 The URL for this domain is impressive in itself, that’s https://weblogs.asp.net

(Basically the root domain being Asp.net, so that says a lot in itself doesn’t it?)

Apart from the URL, what else you might like about ASP is it’s run by Scott Guthrie, who happens to hold a very important position over at Microsoft, as the vice-president of their Cloud and enterprise group.

Microsoft Employee = He knows his stuff, that’s established. Now for his blog, he has been scribbling down stuff on it for the last one and a half decade, that might be longer than some of your ages, so there’s a “L-O-T” of content.

He mainly writes on:-

Why isn’t this on #1 instead of Catonmat? Primarily because Scott shares mainly “Microsoft” compatible codes and tips, while Peter covers the whole of “computer” industry. 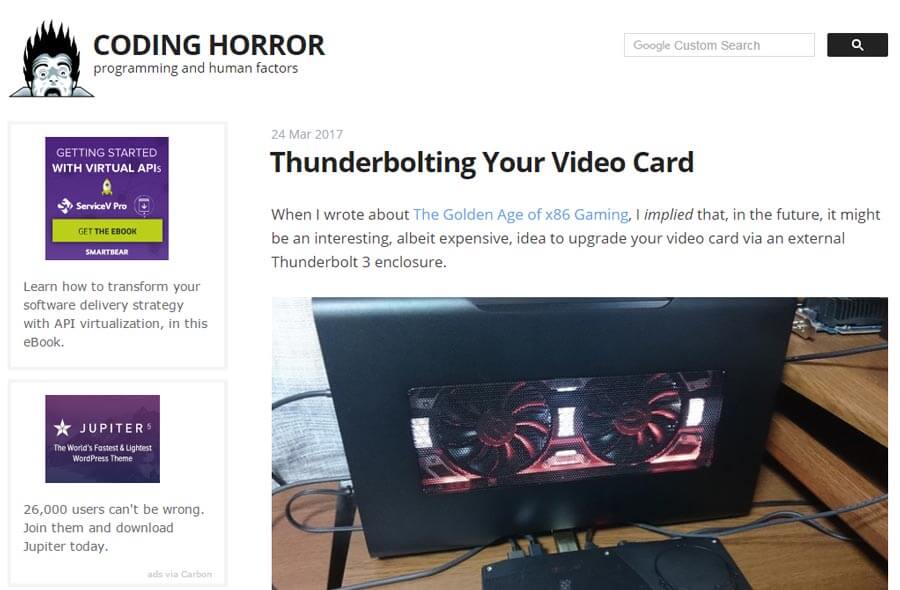 This isn’t the first compilation of the Best Developer Blog(s) I’ve been penning down. Being for quite some time in the industry and for my obvious love of codes, I’ve come across this specific topic quite a number of times.

And Coding Horror is one of the few platforms for developers that gets featured in each of my lists (apart from Catonmat, ofcourse!).

Why I love Coding Horror? The primary point being, it’s updated frequently, almost twice every week on a minimum.

The secondary point being, the superpowers of Jeff Atwood (the founder), to miraculously connect and link every article, every piece of code and maybe even every semicolon to “Humans”, what we’re thinking and how the computers are related to us.

In fact he has quoted “Computers are fascinating machines, but they’re mostly a reflection of the people using them”. Jeff co-founded StackOverflow and Stack Exchange as well.

CodingHorror talks about basically everything that spells “computer”, just like Catonmat, but these are more inclined towards bringing out the “human” side of codes and software (if they exist!).

All I can say is, it’s definitely one of the best developer blog existing on the planet at the moment. 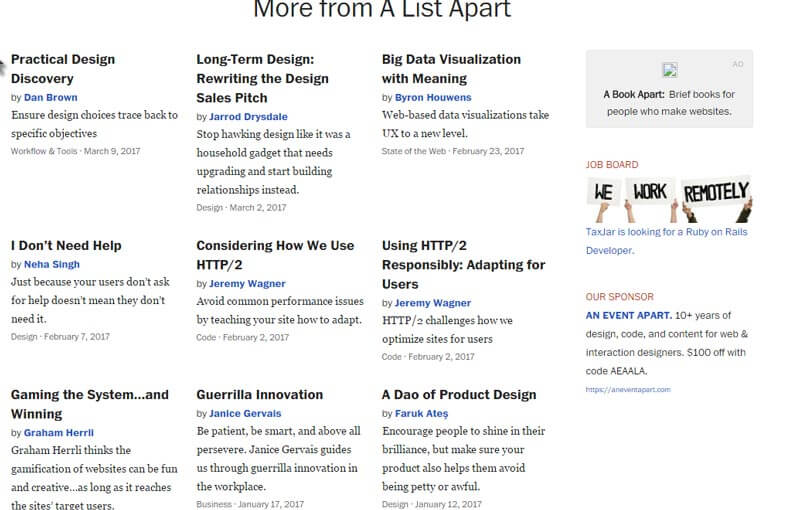 A multi-author blog, which speaks for it’s abundance of content, touching almost everything that there is to “Web Design” and codes. It primarily deals with subjects like CSS, Html, Javascript etc and not the “software” developing languages.

But those aren’t nonexistent, and you should still see couple well researched, informative posts related to them over there.

But its prime focus is to help readers with web developing languages and create a better internet world.

In short, if you need information about developing the web, a list apart is your stop. In fact their tagline says “For People Who Make Websites”, and is a Webzine to be specific.

The name doesn’t rhyme with “Developer” or “codes”, I agree, but the content is a whole goddamn Epic on the topics.

There’s a special and extremely unique flavor that only the Daily WTF offers. As they say, it’s a “how NOT-TO develop software” platform.

Meaning, instead of talking about “how to’s”, they mostly focus on what has already gone wrong with other developers, and how you can avoid that.

Obviously there’s how-to tips, definitions and explanations. But that’s not the primary reasons why the platform was born. It’s more like a “learn from our WTF mistakes” kinda site.

But nevertheless that’s what makes it one of its kind, and it can surely make its position as the best developer blog (from a different perspective, obviously!)

And you can even submit your own WTF moments/projects over there if you’re interested in broadcasting your failures (sharing what went wrong, makes sure that thing never goes wrong with anyone else, ever again, not a bad idea at that!)

So that’s a wrap up folks for this piece on the best developer blog out there. Do let me know if you agree with my ideas and choices. If not, feel free to speak your minds up in the comments section.

Not to mention that you can always share your own favorite “The best developer blog” down there as well, and it might even get included over here if it’s as good as you claim it to be.