To run terminal commands on Chromebooks, Google offers a shell environment which is known as Crosh and this article is dedicated to teaching you top 10 Crosh commands list 2023.

Chromebooks are the new interest of internet surfers and rapidly growing systems which are welcomed by the chrome lovers with the open heart.

Chromebooks are the laptops which are designed especially for the chrome lovers and for those whose core object to use a laptop is surfing the internet. Chromebooks are the Google product and run Linux-based Chrome OS  as their operating systems.

Running Crosh commands on Chrome OS doesn’t require much of your efforts and knowledge. In fact running a Crosh command is way similar to running commands on the other operating system like windows and mac, all you need to know is the exact Crosh commands you should be running.

In this article, we will be walking you through a list of top 10 Crosh Commands that you can use on your Chromebook to deal with various system problems, diagnosing and troubleshooting them, to explore more settings on Chromebook and tweaking hidden hardware settings.

So why delay, let’s get started! 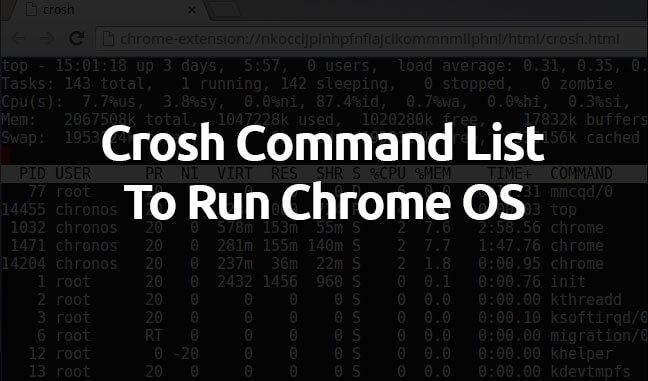 While running commands on Windows OS, we have to open the command prompt in the administrator mode but Chrome OS has no such limitations. Crosh doesn’t require you to put any additional efforts to run the Crosh commands, not even going into the developer’s mode.

To open Crosh on your Chromebook, just press the combinations of three keys i.e Ctrl+Alt+T all together anywhere on your Chromebook and in no time, Google Chrome browser will get popped up with exactly command-prompt like environment.

To understand better, you can see the screenshot below.

In the above screenshot, you can see a red cursor promoting, and that’s where we need to write the Crosh commands.

To help the newcomers, it’s been already instructed there to type in the “Help” commands to get the list of other helpful commands. So, the first things we need to do in order to get started is to Run the help command.

Running the help command gives you the following result.

Now let’s figure out what are the other Crosh Commands you need to know in 2023.

Below are the 10 Crosh commands you should be knowing about!

When you run help Crosh command on your Chrome OS, you get notified about running the help_advanced command to list out some other advanced commands. These commands are basically used for system debugging purpose.

When you run the help_advanced command, you get to see a long list of debugging commands which come out really handy at the time of troubleshooting errors.

Some or the other time, we feel the need of seeing the task manager on our computer just to check our which running process is using the utmost resources and slowing down the system.

The Top command on Chrome OS does the same for you. It displays the task manager of your chrome book on the Chrome shell and gives you a quick overview of the tasks running on your Chromebook, their resource usage, the Chromebook’s uptime etc.

The task manager you get to see when running the top Crosh command is given in the below screenshot. 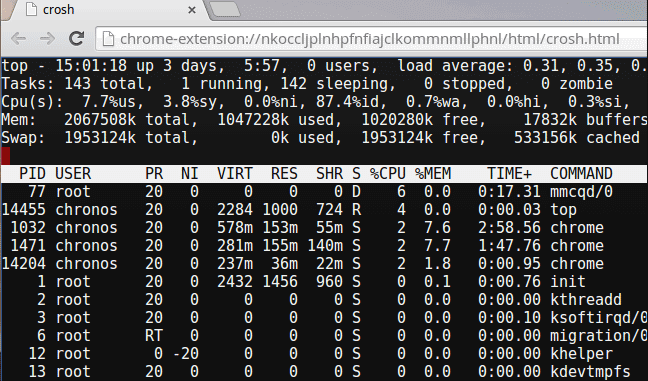 Tracepath command helps you troubleshoot network errors by tracing the network path. It basically analyzes and traces the path of the data packets to diagnose the network problems. Once the problem is detected, it can be troubleshooted very easily. 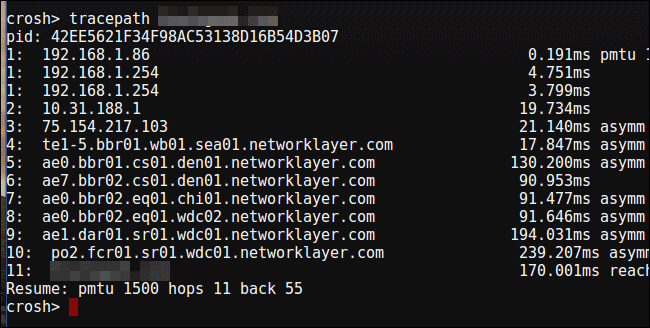 The Crosh command which might be helpful to you is Ssh command. It is used to connect to Ssh servers through the built-in Chrome OS feature without having you to install anything else on your Chromebook.

Besides that, Ssh command also lets you create a local proxy on your Chromebook, that allows you to tunnel your Chrome OS network activity over your SSH connection.

If you have ever run Ping command on any operating system, you must have an idea how does this command work and what information does it provide to the user.

This command works the same on the Chromebook as well, thus it is considered as one of the crucial Crosh Commands for network related troubleshooting by offering information about the data packets being transmitted between the client and the server end.

Have you ever thought of a Crosh command which can lead you to record audio via the Chromebook’s microphone?? If no, then you are highly mistaken.

The sound command is one such useful command which lets you do that.

That’s an amazing Crosh command which is really interesting and can be used to record and save any important audio file on your Chromebook. But you need to mention the time of recording while running the sound command, and when that particular time is over, the recording gets saved as an audio file on your Chromebook, which you can play anytime you wish to via a media player or by running the sound play command.

The sound command needs to be written as “sound record X”. The x is meant to be the time in seconds.

Also Read: What is igfxpers.exe And How to disable it?

TP is an abbreviation for touchpad of your Chromebook. So it’s pretty clear that tpcontrol command lets you deal with your touchpad’s problems.

Running this command provides you with the information related to the Chromebook’s touchpad status.

The Chrome Operating system is advanced enough to diagnosis the network on your Chromebook and helps you troubleshoot the unwanted errors. The 9th command in our Crosh Commands List is Network_diag command.

Read Next: This Webpage has a Redirect Loop (Err_Too_Many_Redirects)

There are so many other Crosh commands which you can leverage for different Crosh utilities. You can know about all the commands by running the help and help_advanced command, which we have already told you about.

When you are done running your desired Crosh commands, you can run the exit command to come out of the Crosh shell of Chromebook. So exit is supposed to be the 11th Crosh command on the list!

The above commands are the general commands which can be run in the general mode but if you are interested in knowing some of the Developer’s mode Crosh commands, We have got some for you!

So, with this, we have reached the end of the article and it’s time for us to conclude it.

Those who has never tried their hands on Crosh commands, it might seem like a tricky task to them but if you go through the above mentioned top Crosh Commands List along with the details on how these commands are used, you will know how easy to deal with Chrome Os is.

Depending on whether you want to run Crosh commands in general mode or in developers mode, you can always refer to this article and use Crosh commands mentioned above. So, it’s time for us to wrap up the article.

In case, you face any difficulty in running Crosh commands on Chrome OS, you can ask your query in the comment section below and we will reach out to you as soon as possible.

And if you found the article helpful and you think it will come out handy to your friends and relatives who uses Chromebook laptops, share it with them using the below share icons, we appreciate your share!