This Joyoshare Media Cutter review will get you a detailed, honest, and transparent insight into the tool.

If you need to trim a video, join two or more videos, extract audio off a video or even convert a video format, this piece is exactly for you.

Like every other tool, Joyoshare claims to be the best in all of those fields.

Obviously, you shouldn’t believe such claims. Not even from me and not without first-hand experience or solid proof.

That’s what I intend to get you.

I’d not simply list the “features”. Rather, I’ve actually used the tool, recorded its results and that’s what I share with you today.

What is Joyoshare Media Cutter?

I picked up Joyoshare when I needed a lossless video cutter. But, it actually offers a lot more than just that.

In fact, it offers more than almost any other media cutter I’ve ever seen.

Before I move on to the features, let’s discuss the tool in general?

Here are the reasons based on which Joyoshare claims being the best video splitter, and also those which I feel could be improved:

Note that this doesn’t mean the tool is perfect.

But, it markets itself as the best video splitter. Hence, I can’t list the lack of more conversion-formats or other similar features as “cons”.

That’s not what it’s supposed to do. Those are just bonus features out of good faith. As far as splitting/trimming goes, it’s truly perfect.

When I first downloaded the tool, I wasn’t very positive about it. “Another tool claiming to be the best video trimmer”, that’s exactly what I thought.

But, once I started using it, it impressed me beyond limits.

For starters, the trimming/splitting features are so easy, I was sold right there.

Then, its “lossless” technology is what sealed the deal.

All the videos that I cut or converted retained their original qualities, completely.

Moreover, the speed was much better than what I expected from the seemingly basic-looking software.

And finally, the features. I never imagined it would have nearly a dozen individual features bundled for free.

All in all, for just a media cutter, that’s a lot of features. So yes, don’t buy it if you don’t want to, but, do give it a try, there’s a free version available anyway.

Why I always talk of the UI at the very beginning of my reviews?

Well, if the UI is complicated or hard to understand, the features and the tool in general wouldn’t mean anything to you.

For starters, you can upload a video for editing simply by dragging and dropping in onto the tool.

You can see three blobs on the video time-bar.

Both the blobs below the time-bar let me set the “start and end time” for the edit.

I can simply set the two sliders to their respective positions and click on “Start” to either trim/merge or do anything else with the video.

Or, I can enter the “start time” and “end time” manually in the provided boxes as well.

If that’s not convenient-enough, you can see those [ and ] buttons, can’t you?

Basically, the exact same thing can be done in 3 different ways.

In all the cases, it never requires more than 3 clicks!

Hence, at the least, the tool is very easy to use and doesn’t require any technical knowledge.

Being a media cutter, obviously trimming and cutting videos is its speciality.

Simply set the two start and end blobs where you want them, and click start.

The video gets trimmed instantly.

Maybe you need clips for your social media? Creating a meme maybe? It just takes a few seconds at best.

It’s not limited to videos, rather, audio files can be edited as well.

Joyoshare Media Cutter offers two merging features, which are similar yet not identical.

You can use it to fragment a video, and then join/merge those fragmented parts.

Or, I can use one or more fragments from the same video + other videos and their fragments to create my new video.

There’s a neat “merge segments” button on the interface:

The “open” button, as shown above, lets me add additional video (or, fragments from them) for merging.

As mentioned earlier in this Joyoshare Media Cutter review, it’s not just a media cutter.

Format-conversion is another one of the advanced features that the tool facilitates.

Videos can be converted to many different formats, some of which include: 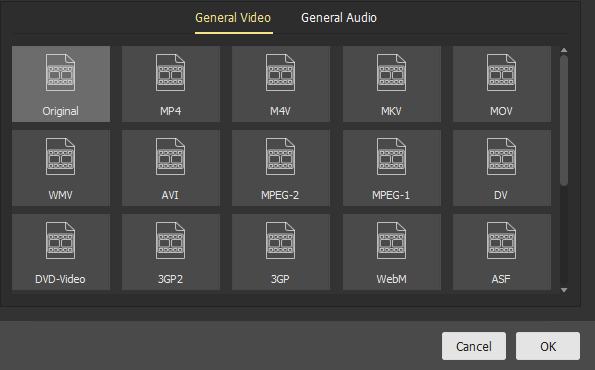 Not just that, it even has device-specific and web-specific formats.

Meaning, if you aren’t sure which format will be the best on your device, you just select your device and not the format.

Joyoshare automatically assigns the best video format for the device.

Similarly, it also has web-formats for various platforms such as Facebook, Vimeo etc.

I’m sure any other software made exclusively for video conversions will offer many other formats.

But, I’d say Joyoshare does offer the most commonly used formats.

Hence, it also can be used as a video converter for everyday purposes.

This is a feature related to format conversion, but totally qualifies as an individual feature by itself.

Using Joyoshare, I can extract the audio from a video.

In other words, if I need just the song from a video, that’s possible. Or, I can make a ringtone from a video as well.

Obviously, other use-cases are possible depending on your needs.

Now, it’s not exactly a “feature” on the tool.

Rather, the format-conversion popup offers a “General Audio” tab.

I can select an audio format on this screen which lets me extract the audio.

Some of the supported audio formats are:

Some of you on this Joyoshare Media Cutter review may be people with more “technical” video knowledge than others.

Although, not everyone is a video professional.

Joyoshare caters to the need of both the type of users. 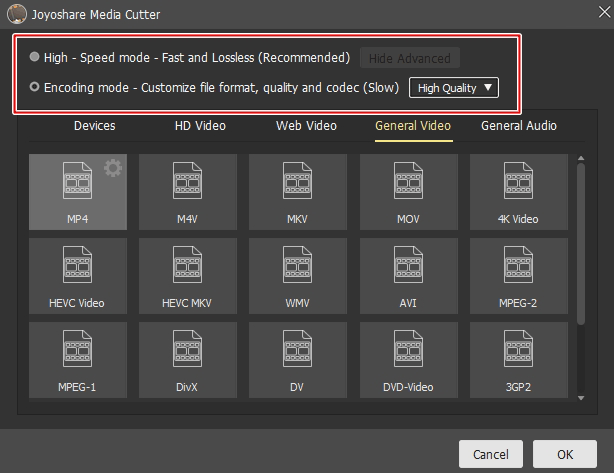 The high-speed mode is for everyone like me, that is, without a lot of technical knowledge.

The “Encoding mode” is for those who understand video technicalities better (it’s slower than the high-speed mode).

You can also choose from two basic options- “high quality” or “small size”. This auto-determines all the settings depending on your preference.

I liked the fact that it exports multiple files simultaneously.

Meaning, I created 4 fragments of my video and exported them.

My initial thought was that each video will get exported individually. Well, I was wrong.

Joyoshare exported all the files at once. That reduces the overall required time exponentially.

The company markets itself as being 60x faster than other tools.

Well, initially I didn’t believe that. I mean, all companies exaggerate, don’t they?

But then, I converted 3 videos and the speed did impress me.

I’d not say it’s the fastest video conversion speed I’ve ever seen. And, it probably isn’t exactly 60x faster either.

But, given that the video-converter is just a bonus feature, the speed sure is impressive.

When editing videos, you do not need to wait for the results to view them.

It’s all in real-time. The video-player lets you play videos and specific fragments.

This tells you exactly which parts of a video are being edited. No unexpected errors will show up.

These are some other basic yet equally important features on this Joyoshare Media  Cutter review. 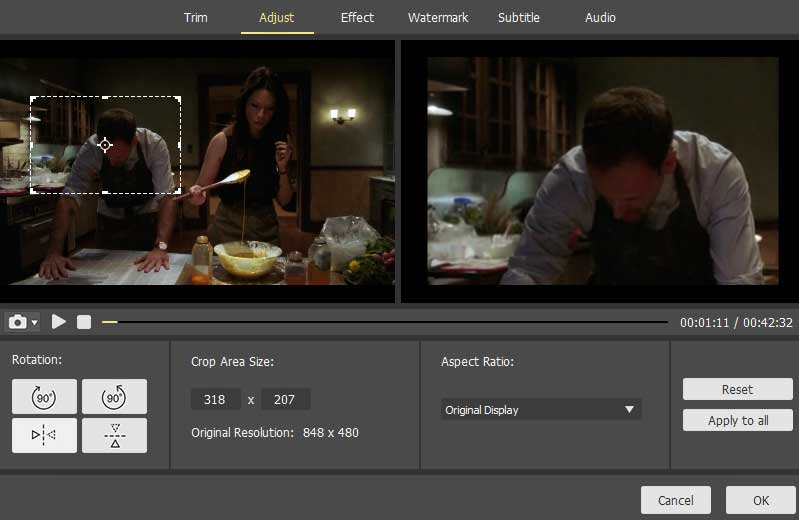 It lets me set the rotation of the videos.  Complete 360 ° rotation is possible.

There’s also a “flip” option using which I can flip the video either horizontally or vertically.

I can either enter the area size manually which I wish to crop, or, use a drag & drop cropper.

The cropping essentially makes this into a “zoom” feature. The smaller my crop-area, the higher my zoom level.

And then finally the aspect-ratio feature lets me set an aspect ratio for the videos.

A total of 5 aspect ratio options are available.

Joyoshare also offers effects and frames that you can add to your videos.

A total of 10 effects are available.

And if I’m being honest, the effects are pretty good. There’s “Fireworks”, “Blue sea”, “Rain”, “Soft shine” and many other options are available.

It  also offers 12 frames which can be added to the videos in a click.

And that’s not all.

It offers a slider-based control for brightness, contrast, saturation and hue.

I mean, this is actually a media cutter, it isn’t even supposed to have all these features.

This is one of the more impressive features on this Joyoshare Media Cutter review.

It lets me add both an image, as well as text-watermark.

A drag & drop interface lets me position the watermark with ease as well.

And finally, it lets me set the transparency.

You’ve a subtitle file that you’d like to embed on your video?

That’s what this Joyoshare subtitle embed feature does.

Just choose a subtitle file, choose the position for the subtitle, set a margin, transparency and scale and you’re done.

You can even choose a font, colour, shadow and outline for the subtitles.

Honestly, there aren’t many subtitle-embed tools as easy as this one.

As mentioned earlier in this Joyoshare Media Cutter review; the tool isn’t just about video but also audio.

It has an audio editor which lets me:

A total of 9 audio effects are currently available.

The feature-list is extensive, but, will it cost a fortune?

Fortunately, no. There’s a 100% free trial which doesn’t even require a signup or e-mail ID.

All you have to do is, download the tool and start using it. It’s limited at 5 cut or convert exports.

There are 3 paid plans:

On top of the free plan which provides access to all the features, there’s also a generous 30-day refund period.

I guess this Joyoshare Media Cutter review offered you at least some insight into the tool? Do you think it’s worth it? Maybe not? I’d love to know your reasons either way, do use the comment-box below to drop your opinion on the tool.