MyPrivacy App Review 2023: Is it the best privacy application for mobile devices? That’s what I’ll be discussing throughout this review.

If you’re someone who has to share his device often or would just like added protection for your data/browser, this piece is for you.

The app is 100% free, forever for most features. So, no, this isn’t a sales pitch. You don’t even need to signup to start using MyPrivacy.

Let’s see what it does right and what’s left to be desired?

MyPrivacy App Review: What is MyPrivacy?

MyPrivacy, as the name suggests, is a “privacy” app for mobile devices. Actually, it’s a package consisting of many different products all bundled into one.

The app is compatible both on Android as well as iOS devices.

Obviously, simply “offering” these isn’t enough, is it? In this MyPrivacy app review, I’ll discuss how these perform in real life.

One of the primary selling points for the app? Its UI! It’s just simple, extremely.

Never used anything similar ever before? Maybe you’re not very tech-friendly? You don’t need to be.

This is what the app looks like when you launch it: 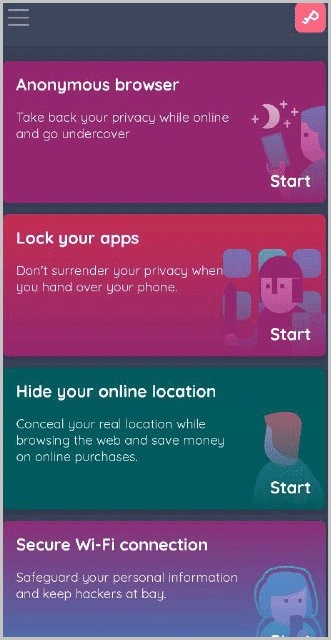 You simply need to choose the exact feature you’d like to use.

See those three horizontal bars at the top-left? Those will give you the settings and other options for the app. 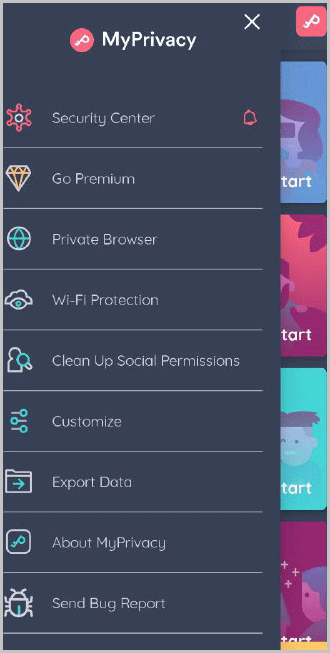 You can even alternate between a “light/dark” theme. Not a native English speaker? The app supports 4 other languages in addition to English.

In a nutshell, I’ll say I’ve never seen a locker/privacy app that combines this many features, with this simplicity.

(It’s definitely not the perfect, all-in-one app. I’ve listed all the problems/cons with the app in the later sections of this MyPrivacy app review).

To access anything hidden using MyPrivacy, or to use its other features, you need to access the MyPrivacy app.

Basically, these security options decide how secure the app will be for your content.

For starters, it offers a pattern. You can set the pattern and use it to unlock the app.

You can also set a password as well as a PIN to unlock the app. 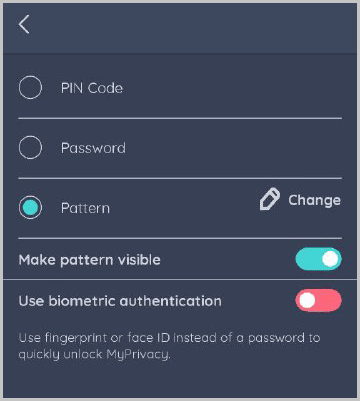 You can enable Biometrics on MyPrivacy as well. Do note that using this would disable your pattern/PIN or password.

The app also has a feature called “logbook”.

When enabled, it’ll secretly snap a photo of whoever enters a wrong password on your device.

This lets you know who’s trying to get into your personal space! It’s not necessarily a new or unique feature nevertheless still useful.

All in all, I’ll say it’s pretty secure, wouldn’t you agree?

One of the primary features the app offers is media locker.

Now, most other apps I’ve used enable a “lock screen” for your gallery/media. You go to your gallery, enter the lockscreen password and gain access to your media.

It imports the photos to its locker page. You can choose to import either from gallery, or use your camera.

After importing, the original file is deleted from your system. This means, the only copy that now exists is on MyPrivacy’s locker.

I believe that’s a security feature by itself. You can share your device with others, they get full access to your gallery without suspecting anything.

To access these hidden photos, you simply have to login to your MyPrivacy app and go to the locker.

Media lockers aren’t new. However, contact lockers? Well they aren’t common, are they?

MyPrivacy has this other feature called “Hide your contacts”.

It basically lets you encrypt your contacts and hide them from the contact book.

You can either create new contacts directly on the app or, import contacts from the address book.

At this age, we all have a few social media accounts, email IDs, forums, gaming accounts and a lot more.

A major mistake most of us make? Keeping the same password across all platforms.

A very recent Google Study found that over 52% of people use the same password on more than one platform.

Due to this, when one platform is hacked, multiple accounts are threatened.

With MyPrivacy, you get a built-in password manager. It lets you save different passwords for different websites.

These forms are completely customizable. You can create additional fields for personal convenience (e.g. I use a “recovery email” field to store the recovery IDs I’ve used for each account).

Facebook and Google (and most other websites on the internet) aren’t  “free”. If they were, they wouldn’t be billion dollar enterprises.

There’s a saying I’m in love with-

“If you aren’t paying for it, you’re the product being sold”.

Browsers collect your browsing habits, websites you visit, products you like and a lot more. This data is then either sold to third parties, or monetized by the browsers in one or the other way.

To help with that, MyPrivacy offers an in-built privacy browser.

It’s nothing complicated and doesn’t have a learning curve. You simply choose the browser and enter the URL you wish to visit.

The benefits you ask? For starters, it doesn’t track/track you. It also blocks all trackers that are generally used to track users and their activities.

At the end of each session, all browsing history and cookies are cleared automatically as well.

Now, this sure isn’t a feature I’ll pay for “individually”. However, it’s bundled for free with MyPrivacy and that sure is impressive, isn’t it?

It lets you lock apps. You can create patterns and set new PINs/Passwords for these apps.

Again, talking of the UI, it’s extremely simple. You simply tap once on the app you wish to lock. 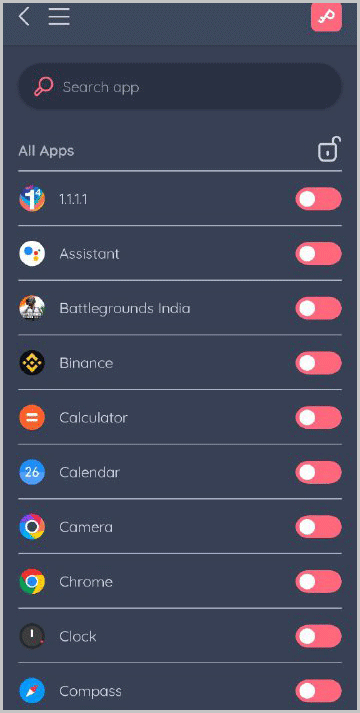 Similarly, there are features that let you lock files and even notes! The steps are almost identical and it’s just as secure.

Tell me it isn’t easy, I dare you!

What’s the primary footprint using which a user’s identity/location are tracked on the internet?

If you hide your IP address, you’re pretty much invisible on the web. You can access content blocked by your government, access videos that aren’t available in your country’s Netflix library and do a lot more.

Now, VPNs aren’t free. Do note that even with MyPrivacy, the VPN is only available on its paid plans. However, it offers about 22 different locations you can connect to.

This is a feature that I don’t see often with similar apps.

It monitors your online social accounts and reports back if and when they collect personal/private information.

Not just that, it also helps remove such information from these accounts

Once connected, the attacker can unleash unimaginable damage to your system, online activities, and even bank accounts!

To protect against that, MyPrivacy offers a one-tap “Auto protect Wi-Fi” feature. Simply enable this and you’re done.

Whenever you connect to a Wi-Fi next, your connection will be encrypted and secured.

It also has another feature called “Trusted Wi-Fi’s”. It’s like an ‘exclude list” for the “Auto protect Wi-Fi “ feature. You can add Wi-Fi’s here so that they aren’t “auto protected”.

By default, the app gets “locked” as soon as you minimize it. (Neat security feature, isn’t it?).

In other words, opening other apps or changing the screen in any way will lock it.

However, there’s this “brief exit” feature.

It lets you set a “time” or condition only after which the app will be locked.

Doing this enables you to use multiple apps with MyPrivacy without having to enter your login pattern/PIN every time.

You can either set it for:

This probably is the most important aspect on this MyPrivacy app review.

Because you save/lock everything “inside” MyPrivacy, how do you know they don’t access your secret data?

The app uses “End to End” encryption to encrypt all your data.

This means the data is encrypted on your device and the company can’t access it even if it wanted to.

This is another very important feature that the app offers.

So, imagine you forget your password/PIN/Pattern for the app.

There’s no way you can recover your data. Even the company can’t help you because they technically have no power/control/access over your password whatsoever.

This is where the recovery mechanism comes to the rescue.

When setting up the app for the fist time, you get to set a “recovery email”. This is the only way to recover your data if you lose your login authorization.

The one major problem which requires highlighting is its “data loss when uninstalled” problem.

Meaning, if you’ve stored data on the app, and you uninstall the app, you lose your data. Forever. There’s no way to recover this data, and no, re-installing the app won’t fix that.

The solution to that? Simply “export” your data before uninstalling the application. This decrypts the stored media and makes it accessible without the app.

The second issue isn’t exactly a “problem” but just something that needs attention.

When you unhide a photo/video using the app, it won’t appear in your gallery. Quite a few take it to be a glitch or an issue. That’s not so.

Rather, the media has just gone to a new folder titled “MyPrivacyExport” folder.

The app is free! It may sound like an overstatement but it isn’t.

Most of the features are absolutely, 100% and forever free.

Even for the paid plans, it offers a 7-day free trial! Here are the two plans:

(Prices may slightly vary depending on your native currency).

Both the plans offer access to all the features. It’s just that on the Pro plan, the VPN quota and “Internet protection” is limited.

MyPrivacy final verdict- Is it the best privacy app?

I’ll say it’s the best privacy app that I’ve ever used. Sure, that may not be globally true. But in my personal experience, it’s one of the best all-in-one privacy solutions.

Even when talking of flaws, there aren’t many. Most people using your device won’t even know you’ve “hidden” something unless they specifically check the app.

The features are pretty impressive and easily understood.

The only thing I’d improve? Make sure “uninstalling” doesn’t kill my data forever. But hey, that’s something which can be avoided just as easily.

To top it all up, it’s almost completely free. The 7-day trial for the paid plans is just icing on the cake, isn’t it?

In a nutshell, I’ll rate the app 4.5/5 for this MyPrivacy app review.

« Press Pog Review: Is It The Best Press Release Distribution Service?
Mr Key Shop: What Makes it Stand Out in the IT Industry? »