Press Pog review 2023: Is it the best press release distribution service? That’s what we’ll discuss in this piece.

If you’re a brand, startup, company, or anyone else who needs exposure/sales, this piece is for you.

Along with Press Pog’s features, I’ll also discuss how and why press releases matter in 2023.

Just to incentivise things, let me just say that you’ll be getting press releases for less than $1.00/site! If that sounds interesting, keep reading.

Do Press Releases still matter in 2023?

Before I start with anything, let’s address this Elephant in the room?

We’ve got social media, independent news channels, Instant messaging and a lot more. Certainly, this has killed press releases to an extent.

However, they aren’t dead yet.

Again, let me be blunt. If you wish to use press releases solely and exclusively for SEO purposes, you can’t.

Google has clarified that P.R links are ignored for SEO purposes.

However, there are a bunch of other benefits which these releases still carry-

Overall, when you take all these into consideration, the exposure + social value + direct traffic has all the potential to convert into paying customers, don’t you agree?

What is Press Pog?

In other words, they can get your press released published on different platforms.

for each of your press releases! That’s massive, isn’t it?

They even write your release for you, although that’s optional. You can skip this and provide them with your release as well.

The average time required for these releases to be published is about 3 days.

There’s no rocket science here so let’s proceed to the next section.

Which publishers does Press Pog cover?

But, what’s the point of this Press Pog review without the most crucial piece of information, right?

You definitely need a list of sites where you may get published, don’t you?

It’s not possible to list all 300+ names that they generally cover. However, I’m attaching a screenshot to some of the sites you get published at: 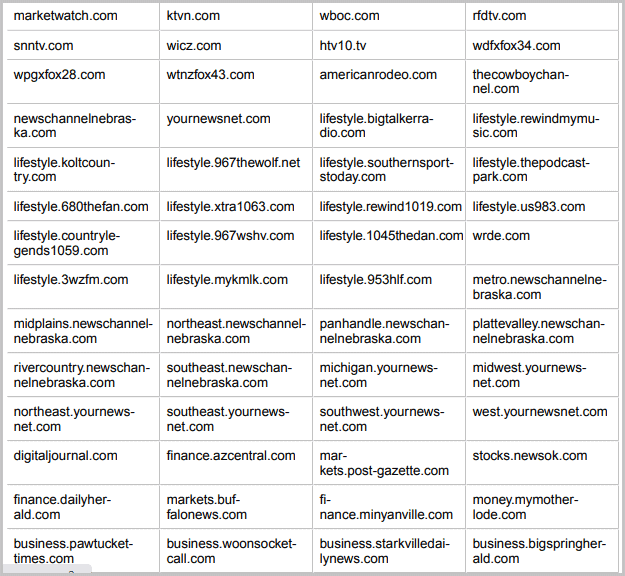 Do note that the screenshot above only shows a fraction of all the available websites.

Contrary to most other press release distributors out there, Press Pog actually has an interface.

It’s not as basic as “you send a document and they get it published”.

There’s a full-fledged, completely automated interface you can use to submit your release. 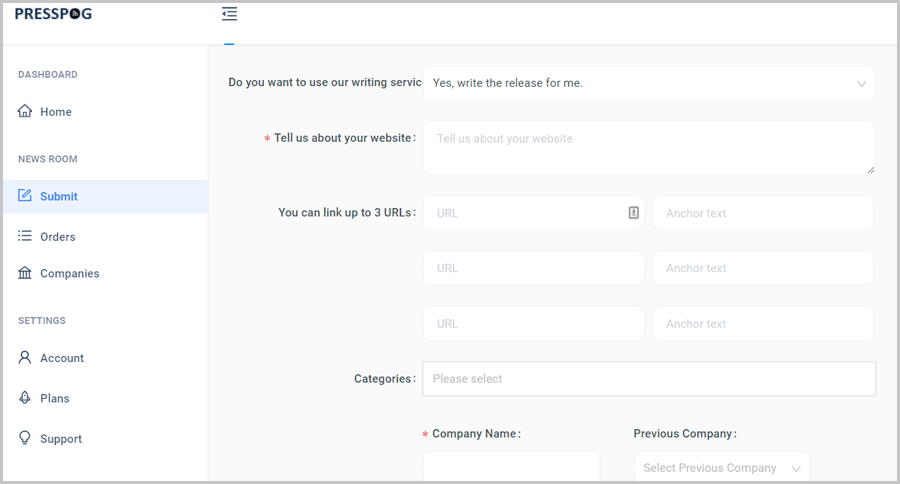 You simply enter a brief description of your website, and choose 3 links with their anchor texts.

You can select a “Category”  which helps Press Pog find more suitable matches for your release.

Once the order is submitted and processed, you get a detailed report with live links to each publication.

In the above screenshot, you can see options on the left sidebar. These basically let you view your account, submission history, pricing plans etc.

E.g. there’s this “company” tab. It lets me fill in my company info and save it.

Doing this makes sure I don’t have to manually fill in the info every time I submit a PR.

Point being, it’s easy and you don’t need to be an “expert” in anything to use Press Pog.

Maybe you’re a third-party/agency and working for others?

You may not like them seeing Press Pog on the “reports”, would you?

By reports, I mean the list of the websites and links where the release is published.

Do note that this doesn’t affect the actual press release.

That’s published the same regardless of you having or not having white-label packages.

The difference is only in the “report” that Press Pog provides to you after the releases are published.

When you opt for the white-labelled reports, you can use your own logos/brand names in the reports.

I personally doubt most of us would need “support”.

It’s not a complex software or tool which has many moving parts anyway.

However, if you’re still confused, the company offers a live chat on its website.

The response time is a few seconds at best.

You can also opt to get in touch with the company via e-mail. I’ve not personally tried that but I’m confident it’ll be slower than the live chat.

Another tiny feature that I loved is its Google keyword tracker.

On the report that you get, it also includes a bunch of keywords. These are the keywords for which your P.R is currently ranking for.

These links are clickable. Clicking on these takes you to a Google search page which shows the current position of these keywords.

I did mention earlier that the company allows you to submit self-composed releases.

To do that, it offers an in-built text editor. If you’ve used MS-Word, WordPress or any other similar editor, you’re familiar with the tool. 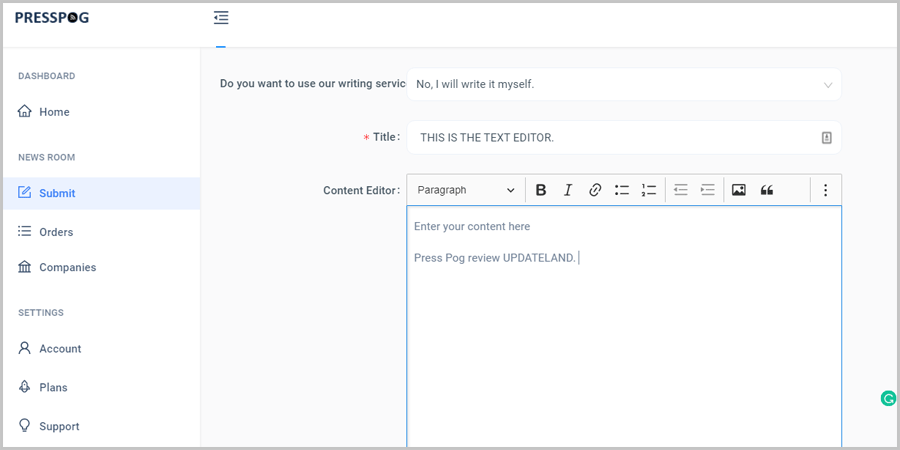 It’s pretty feature-rich. You get the basic format options such as bold & italic, bullet points, ability to attach images, quotes and so on.

Does it make or break a deal? I don’t suppose so. However, it still makes for a neat feature.

So, before I conclude this Press Pog review, let’s discuss its pricing?

So, there are two packages you can go with.

In this plan, you can’t get the release written from Press Pog. You must write it on your own and submit it to them.

The next plan is the “Agency” plan.  It costs $199.00/month. For starters, it offers free releases written by them, for both submissions, at no extra cost.

It too only allows 2 submissions/month. For more, you can get in touch with them for a custom plan.

The white label discussed earlier too is exclusive to the Agency plan.

The Google rankings too are only included with the Agency plan.

Do note that there’s no difference when it comes to the “websites” where you’ll be published. No changes will be made to the release either.

Before I sign off, let me just sum up everything I’ve discussed so far.

How to use Press Pog [for absolute beginners]

As mentioned earlier, the interface is extremely simple and self-explanatory. 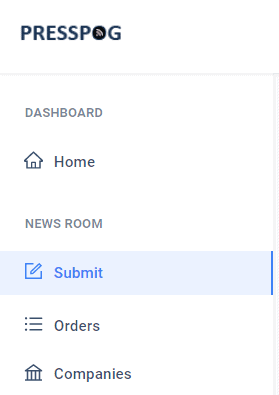 Step 2: Fill in the form. It already tells you the field context, however, let me simplify it for you. I’ve explained what to enter in which box, just follow the numbers:

Below these, there are a few columns for company information.

It takes Press Pog anywhere between 1-3 days to get a release published. This isn’t very fast neither is it too slow. It’s at par with industry standards.

With any P.R campaign or a P.R service, a few questions are universal. Let me try to answer a few of them?

#1. Does Press Pog offer a refund?

Given that certain conditions are met, a refund is possible on Press Pog. The first being, if you haven’t used a credit you get a full refund. If you have used your credits, you still get a refund although this is pro-rated and not full.

#2. Will all publishers publish my press release?

Press Pog guarantees a minimum of 275 features. However, it sends the release to many hundred different publishers. While not all publishers may publish your release, you still get 275 releases published no matter what.

#3. Does Press Pog charge extra for images and video embeds?

No, it doesn’t unlike most other similar services.

No, you don’t. It’s included for free in the Agency plan.

#5. Is it illegal to buy press releases?

Paying for press release publication/distribution or using such services is completely legal.

I won’t’ say it’s the best press release distribution service. That’ll be a tall and unverified claim I rather not make.

However, it’s more than capable of getting your releases published and getting you notified.

Between the 300+ websites, automated interface, live chat, and really affordable pricing I’ll say it’s worth it, wouldn’t you agree?