Top VPN myths in 2022. That’s what this article will try to debunk or just explain better. Unlike our other articles, this isn’t a review or a “how to” guide. However, reading through this piece will certainly make you a safer internet user in general.

These myths hold true for Windows VPN, Linux VPN, mobile VPNs and basically just a Virtual Private Network in general regardless of its platform.

And no, you do not need to be an international spy to use a VPN. Literally, any and every internet user can and should use a VPN! 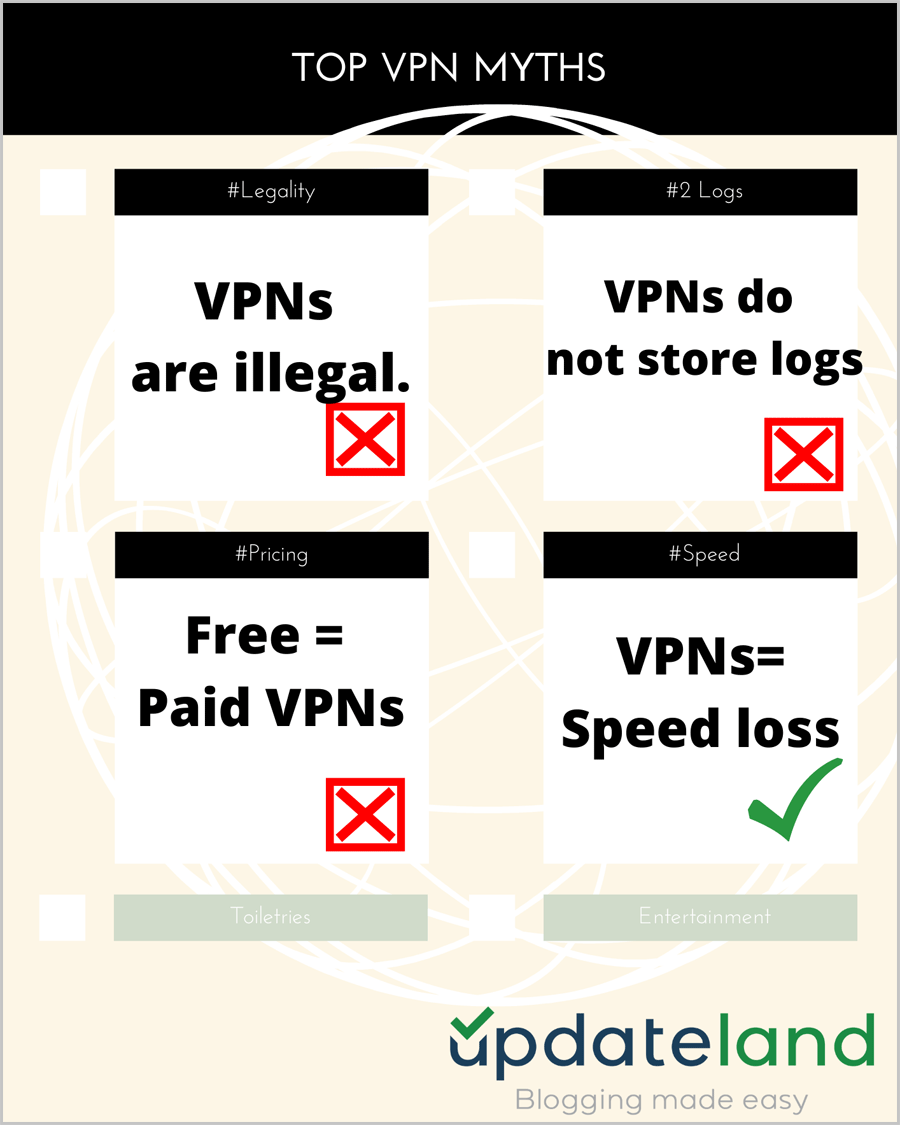 I’m sure you already do! Let’s debunk some myths then?

VPNs do not store logs [ Myth]

This is “the” biggest, most dangerous and most well-kept VPN myths of the industry.

Just because a VPN promises to be “no log” or even  is contractually bound by its T&C to “not store logs” doesn’t mean it’s truly logless.

In other words, even a VPN which promises a “no logs policy”, may actually be logging you.

In fact, PureVPN, one of the most reputed VPNs of its time logged and even assisted the FBI in a certain situation.

Not just PureVPN, another very popular name at its time, HideMyAss too has collaborated with the authorities and lead to users facing jail and worse.

These are just two out of many other similar cases.

Basically, some VPNs log not your IP address, but also your activities on the web. As a result, they can always link your original IP, to the IP assigned to you and unmask everything you’re doing.

So, what you can and should do is verify a VPNs “no log” policy. Only go with those VPNs which have got their “no log” policies audited and verified by third-parties.

ShurfShark, NordVPN and ExpressVPN are some companies with an independently audited third-party “no log” verification.

All VPNs are the same [Myth]

No. They aren’t. There are major and serious differences between VPNs. Some even leading to life-threatening consequences.

In fact, when choosing a VPN, you must pay serious attention to the following points:

Point being, not all VPNs are the same. In fact,

“Choosing the wrong VPN is worse than not using a VPN”- Updateland.

No matter which VPN you use, some speed loss is guaranteed to occur. This is to be expected because of all the routing and additional security protocols your connection goes through.

However, when you use the right VPN, the speed loss is either completely negligible or doesn’t make a huge difference.

It’s best to always try a VPN’s trial plan and verify speed before committing to a long-term payment plan.

Because of what VPNs make possible, a very common myth around VPNs is that they’re illegal.

I mean hey, they let you access what the govt. deems illegal/inappropriate. Hence, the govt. making VPNs illegal is totally an acceptable hypothesis, isn’t it?

However, no. VPNs are completely in most nations. You do not get in any legal trouble for using VPNs.

Obviously, there are exceptions to this rule. You can’t use a VPN legally in Russia, North Korea, UAE etc. Do note that this isn’t legal advice. Check a VPN’s legality in your country before using a VPN.

They also add significant security to any connection, primarily against public Wi-Fis. Public Wi-Fi networks are one of the easiest and simplest to hack into.

However, with a VPN, the hacker gets to your VPN connection instead of the actual connection to the Wi-Fi and hence can’t hack into your system.

VPNs make you 100% secure against hackers and govt. [Myth]

Hackers and third-parties aren’t limited to hacking only via your “IP address”.

Despite you using or not using a VPN, social engineering, phishing, RATs, malware. Digital fingerprinting and many other threats still exist and are just as disastrous.

Moreover, social networks and search engines are major spies these days. They follow you around extensively, to a point where they can almost predict what your next order should be.

You need to understand that just because you can “access” a website, doesn’t make it a legal act.

The only difference is, in this case, with a good VPN, chances of you getting caught are almost nill.

Free VPNs are the same as Paid VPNs

Another major error most commit when choosing a new VPN? They opt for free VPNs. One of the top VPN myths is that free VPNs are the same as paid VPNs. They aren’t.

“When you aren’t paying for a product, you are the product”.

And that’s just as true as it can get.

Maintaining a VPN is a very cash-demanding job. So, there’s no way a company just offers you complete anonymity and freedom for free.

In most cases, the companies either store logs by default or very readily help law enforcement if and when required.

Also, free VPNs tend to offer fewer features. And most importantly, I’ve never seen a free VPN offer speeds I can work with.

Then there are ads, limited bandwidth, very limited “simultaneous connections” and other restrictions.

Point being, a free VPN is the same as a paid VPN only on paper. In reality, it’s almost suicide in terms of security or anonymity.

Tor and a VPN are the same [Myth]

A lot of people tend to use Tor as an alternative to a VPN. While it’s “similar”, the actual technology and usage actually differ vastly.

For starters, TOR is a browser while VPN is a software. TOR only changes the IP for those websites which are accessed through the TOR browser.  A VPN on the other hand masks and encrypts your entire system, including all the browsers and other software.

TOR is a “node & volunteer” based mechanism. In other words, other people who volunteer to be nodes help facilitate the IP change and anonymity. This isn’t secure. . TOR has been hacked by the FBI in the past.

Point being, TOR can change your IP. TOR can help you access “some” blocked websites. However, it isn’t half as secure as good VPN.

I understand where this myth originates from. Given what a VPN achieves, the idea that it must be something complicated and hard to use does get attached to it. Then, terms such as “protocols”, “kill-switch” etc. make it sound even scarier.

However, using a VPN is simpler and easier than using most social network sites!

If you know how to read and click on a mouse, you’re already overqualified as a VPN user.

Most VPNs offer you a map as well as a list of countries. You  simply have to choose your country. You can either click on the map or this country-list.

Doing so instantly connects you to a VPN from the country you’ve selected. Done.!

VPNs let you access any and all websites [Truth]

This is technically correct. One of the few ways any party blocks a website is by restriction the “IP addresses” from specific countries/regions/providers.

Hence, when you change your IP, you can pretty much access anything.

However, do note that there are some anti-VPN websites. Meaning, these websites, from their own end, have banned VPNs. A good example is Casinos, Advertising networks, and crypto exchanges.

You can unblock regional Netflix content with a VPN [Truth]

A secret not known to many is Netflix/ Amazon Prime/ Hulu etc. are regionally-curated. Meaning, the movies/series you see aren’t necessarily “all” of their content.

Rather, they only show you specific content that’s allowed in your region. As a result, a certain season from a certain may not be available to you, but, it’s available to people from a different country/region.

The point of this article was to make you a better VPN user. I hope you’ve learnt how to choose a and how to be safer on the internet.

If you’ve got any other top VPN myths or doubts you’d like answered, the comment box is all yours.