Zadarma claims to be a complete solution for any and all “telephonic” needs when it comes to a company/team.

You can setup virtual offices in countries you’ve never been to. Automatically route calls. Create automated leads using its CRM. Let your website visitors call you for free, in a single click and a lot more!

And that’s just the tip of the iceberg. Let’s dig deeper and see how true its claims are? If you’re a bit conservative about the pricing, let me say it right away, there’s a 100% free forever plan.

Zadarma is basically a virtual phone system for businesses. If you own a business which has or needs a phone support, Zadarma is the software use.

Just some of its primary features include:

Obviously, that doesn’t explain Zadarma. Let’s get you a deeper look into the platform then?

Zadarma “sounds” like a complicated tool, doesn’t it? Even I wasn’t quite sure if it’s something I’d understand or be able to use!

Fortunately, Zadarma seems to have one of the simplest and easiest interfaces out there: 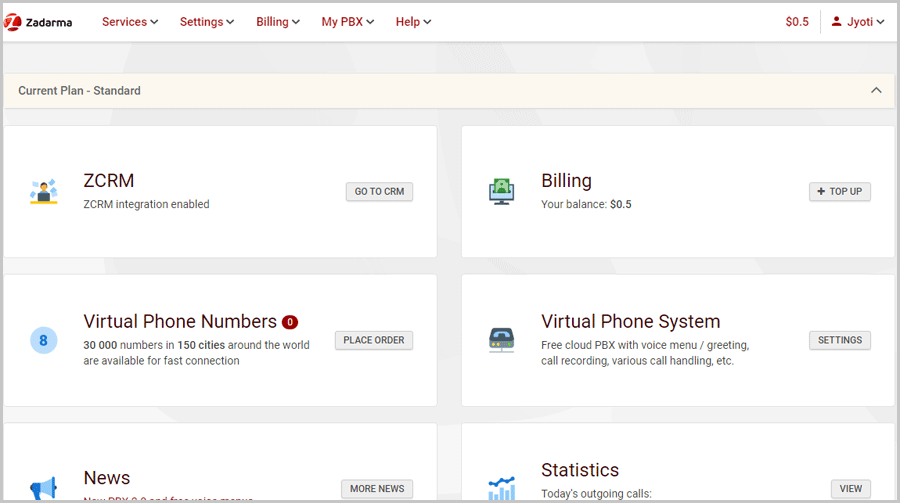 I’m certain this is self-explanatory isn’t it?

There’s the top-bar which lets you access all the different features and options that Zadarma offers.

The center screen has all the setup options. You can set up your outgoing calls, virtual numbers, billing and so on.

So yes, as far as UI goes, it’s pretty clear that anyone can use Zadarma even without any prior experience.

Let’s briefly discuss some of the offered features then?

This is one of the biggest features that Zadarma sells for. Zadarma has an arsenal of over 30,000 phone numbers spread across 150 cities and regions on the planet.

Your clients will never know your actual location!

You simply select your country/region and if you’ve got the balance, the services are activated almost instantly.

There’s no connection fee for most numbers and the monthly charges are generally between $2.00-$3.00. Do note there are exceptions to this rule and some numbers do have a connection fee and a much higher monthly fee.

Zadarma also specializes in toll free numbers. You get to offer free phone support to your customers without requiring expensive hardware, neat eh?

You can either receive the calls online, or, forward them to physical phones.

If you’re on this Zadarma review, it’s very possible that you have a long list of phone number. You may have gathered these as leads , existing customer or any number of other reasons.

Now, it’s possible that some (or most) of those numbers have gone out of service since you last checked. You could call every single number to verify its status, if you were in the 90s.

Today, you can just run the numbers through a HLR lookup on Zadarma.

Zadarma allows checking upto 5000 numbers in a go (yes, you can upload a .xls/.xlsx/.csv/.ods) file.

You probably have a team. Or at least a few clients. Zadarma has this video conferencing feature which would let you connect to many different people at the same time.

I’ll be honest, this isn’t a “wow” feature. It’s possible via almost every other app on the planet these days.

However, because Zadarma is also your VoIP provider and CRM, it offers additional features which lets you manage, record and basically organize these people better.

The cheapest Zadarma plan gets you 1 host room and 10 participants. However, this can be increased depending on your pricing plan.

Now this is something most of you should find interesting, I certainly did. The PBX lets you do multiple things.

You can choose what you wish to do with incoming calls, where you want each call routed and so on. You can either route incoming calls to each individual employee, to a voice greeting or to a voice menu. Call recording too is possible with the PBX.

Yes, voice menus are something you can create using Zadarma. You simply need to type your text and it generates voice menus for you based on the text. 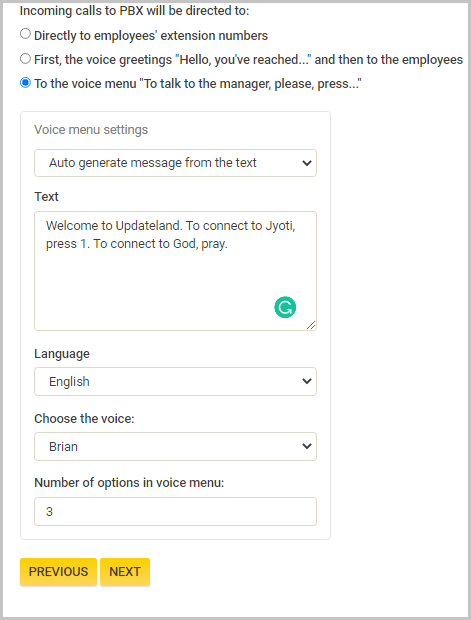 Over a dozen different voices (from different ethnicity and regions) are available to choose from.

You can create extensions for employees using the PBX. The employees can route and transfer calls to other extensions, voice greetings or the voice menu in seconds using simple shortcodes such as #505# (to transfer the call to the 505 extension).

Do note that the cloud PBX is free only if you top your account with any amount every 3 months. If not, you’re charged $5.00/month for the PBX. Obviously, the PBX can be disabled entirely if you aren’t using it.

On the other hand, for users on the “Office” or “Corporation” plan, PBX is always free on Zadarma.

Zadarma offers a full fledged CRM which can be integrated with your calls, SMS and everything else for seamless client and office management.

According to a research, sales can be increased by up to 29% simply by using a CRM!

The Zadarma CRM can be used to create leads, client-cards, attach client information and leads to specific employees or calls and so on. It can even be configured to create leads on automation.

You can also use it to create a task checklist, deals, assign tasks, create a roadmap to the objective and a lot more.

This is absolutely free with Zadarma.

In case you already use a business CRM, data can be exported from and to the Zadarma CRM as well.

This is a guaranteed conversion-booster. Zadarma lets you create  a “call me” button. It’s a simple widget that can be installed on your website in a few minutes.

Once installed, your visitors can call you instantly. They do not need a phone. Their headphones or in-built mics are used for the calls. The users aren’t charged anything for the service.

Not just Zadarma, this call buton can be integrated with most other popular CRMs. This button and the service is completely free even for you.

Call Tracking (not what you think)

The call tracking feature on Zadarma isn’t something that you generally see in a spy movie.

Rather, it’s a simple feature which lets you track the no. of calls received on each number. Specific numbers can be attached to specific advertising channels.

This would show you which of your ad campaigns are bringing in the most leads. Simple, yet something we often miss out on, isn’t it?

As the name suggests, it’s a phone system integrated on your website/browser.  You can basically make calls without requiring a phone.

Because this is all linked to the Zadarma CRM, each call can be recorded, attached to a client card, and have other stats which can be used to increase chances of successful conversions.

I’m just happy how easy this process is.

For now users can use credit cards, PayPal, and bank transfers for loading the funds. It allows loading amounts as small as $5.00.

Finally, before I sign off this Zadarma review, let’s see how good/bad their support is? So, they provide 24X7 support via their live chat.

Now, the live-chat is sure helpful and available. However, the replies do generally take a minute or two. It’s not painfully slow, however, it certainly can be made faster.

Except for the live-chat, they can be reached via phone or e-mail.

It certainly is a feature-rich tool. But, does it burn a hole in your pockets? Fortunately not.

It’s free! Well yes. There’s a forever free plan and it does offer access to most features.

As for the paid plans, there are two packages:

Hey, why take my word for it? Go try it out on your own . The company gives you $0.5 in credits simply for signing up and verifying your phone number. That’s enough to check the platform and test the waters.

Let’s sum this piece up then?

That’ll be all for this piece folks. Time for my opinion then?

I’ll say Zadarma is the perfect solution for anyone with any kind of “team” or “organization”.  If you (wish to) provide customer support, manage/get leads over call, or basically use a phone internally in your organization, Zadarma isn’t a disappointment.

That’s primarily because most of it is either free, or just cheap (hey, $5.00 deposits, remember?)

I did try my best to explain as much of the service as possible, in the simplest of words. However, given the vast features on the platform, I’ve only just scratched the surface.

Hence, I’d urge you to go check the tool once you’re done on this Zadarma review. It’s not only free, you get $0.5 credits when you sign up! No losses there, right?